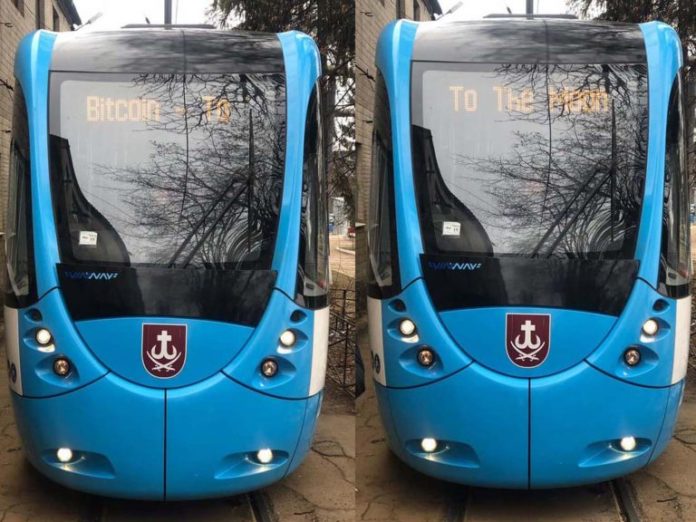 LED signs flashing the text “Bitcoin to the Moon” have been spotted on a tramcar in the Ukrainian city of Vinnytsia. Pictures of the signs appeared on social media just as the National Bank of Ukraine announced that it has completed a pilot project to launch its own digital currency called e-hryvnia.

Pro-Bitcoin Signs on a Tramcar

It’s unclear who is behind the initiative for the pro-Bitcoin signs on the tramway car. Photos published on Facebook show they have been installed in a new Vin Way tram.

The 32-meter long rail vehicle, manufactured by the locally based Vinnytsia Transport Company, is a new model equipped with Wi-Fi connectivity among other extras.

The pictures have been shared by Roman Petrov, options trader at the Chicago Mercantile Exchange, the crypto news outlet Let Know reported. The photos have been taken on Feb. 24, according to the publication. Not all news from Ukraine is positive, however. The appearance of the Bitcoin signs comes after last week city authorities in the Ukrainian capital dismantled the building housing the Bitcoin Embassy in the country’s capital city.

The embassy was established in 2014 as a project with educational purposes. Kuna, one of Ukraine’s leading cryptocurrency exchanges, participated in the initiative.

The organization that’s currently running the embassy believes Kiev authorities have broken the law and violated its private property rights by acting without a court order.

These crypto developments coincided with another update from Kiev related to the digital space. The National Bank of Ukraine (NBU) has completed a pilot project to launch an electronic version of the national fiat, the hryvnia. The announcement was made by Alexander Yablunivskiy, director of the department for payment systems and innovations at the central bank.

The bank official revealed that the new financial instrument has been issued to NBU employees at the end of last year to evaluate the practical aspects of its use and the bank’s capacity to realize the project as well as to get feedback from real users. “The pilot is now complete. We have prepared an analytical paper that will be reviewed at a meeting of the National Bank’s board,” he said during a press conference in Kiev on Friday. Yablunivskiy added that NBU intends to publish the document which will contain a practical analysis of both the project and the world trends in this field.

What do you think will be the future of cryptocurrencies in Ukraine? Share your expectations in the comments section below.