The value of bitcoin surged past $1,000 this week, the first time it has reached such heights since late 2013. But don’t let that big number fool you: this strange and controversial technology is no closer to becoming a mainstream currency. Even Olaf Carlson-Wee, the first employee at Coinbase, the country’s most important bitcoin company, will tell you that bitcoin will never be a substitute for the dollar.

“It was a big mistake that any of this was ever compared to currency,” Carlson-Wee says.

This seemingly pessimistic sentiment is what you hear more and more often, not only from people on the fringes on the bitcoin community but those at the heart of it. Bitcoin is not something the average person will ever use to buy and sell stuff, they say, particularly in the US and other Western countries. The world just doesn’t need a dedicated digital currency. It’s already pretty darn easy to pay for stuff with dollars, thanks to debit cards and the internet and any number of smartphone services. And even if the need was there, too many legal, regulatory, and cultural hurdles stand in bitcoin’s path to mainstream adoption. Right now, bitcoin is useful mainly as digital gold—as an investment. Precious metal-style speculation is why bitcoin’s value is on the rise: The price is going up because people think the price will keep going up—particularly people in China, which now dominates the bitcoin landscape.

Bitcoin is also a useful way of moving money across international borders, and that will likely be its main application over the next several years. But for Carlson-Wee, bitcoin is most valuable as something else entirely—not as a new currency, not as a new gold, not as a new Western Union, not even as a new stock, but as something that enables financial phenomena that have never existed before, what Carlson-Wee calls “programmatic finance.” Through the idea of a blockchain, Carlson-Wee believes, it will power businesses that essentially own and run themselves—a role more important than any one currency.

He believes this so strongly, in fact, that he left Coinbase this past summer to start Polychain Capital, a new kind of hedge fund designed to back this need breed of business. Backed by $10 million in venture capital from the likes of Andreessen Horowitz and Union Square Ventures, Polychain only invests in bitcoin and other digital “tokens” that live on a blockchain, the distributed online ledger that makes bitcoin possible. That may sound like Polychain merely invests in online currencies, but the idea is more ambitious than that. Thanks to Ethereum and other alternatives to the bitcoin network, such tokens are increasingly prevalent online, and they’re intended to function as digital versions of anything that holds value—not just money. Ethereum, for example, runs “smart contracts”—software programs that can potentially drive entire businesses.

Carlson-Wee declined to discuss the company’s specific investments. But one example of the kind of investment he has his eye on is The Golem Project, an effort to create a new incarnation of the world wide web that’s completely decentralized. Right now, the web may be distributed across many servers, but it’s still run by central authorities such as ICANN, and it still has central points of failure. Golem is creating an alternative system that’s completely distributed. No one person or company or government owns it. No one individual or group can decide how it operates or when to shut it down. It operates according to the will of the many.

There’s also Filecoin, an Amazon-cloud-like data storage service that operates without Amazon or any other central authority. And perhaps most famously, at least in bitoin circles, there’s the Decentralized Autonomous Organization, better known as the DAO. Also built atop the Ethereum blockchain, the DAO operated as a new kind of venture capital fund, one controlled not by someone like Marc Andreessen or Peter Thiel but by thousands of people spread across the internet. It’s a key example, because it shows the weakness in smart contracts: it was hacked last year to the tune of $50 million. The kind of blockchain businesses that interest Carlson-Wee are still a long way from maturity, and as online entities, these creations will never be completely safe from online attack, as Carslon-Wee admits. 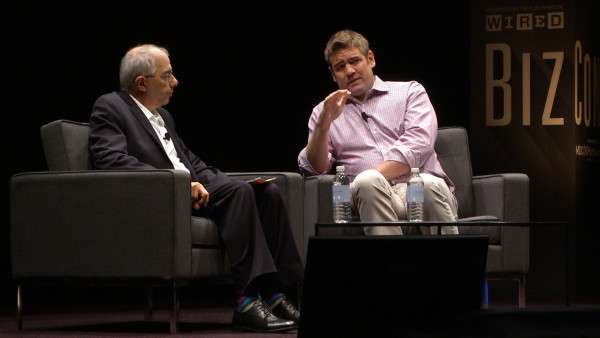 But he also believes there are safer ways of building systems like the DAO. They should be built in a modular way, he says, much like any secure software. And he believes that ultimately, decentralized operations like Golum or the DAO will be the norm. One day, he says, the world will use a decentralized Facebook, not Facebook itself, a decentralized Uber, a decentralized Etsy, and on and on into every sector of the economy. “We’re going to see whole industries plowed over by software contracts living in these blockchains,” he says. Carlson-Wee is not the first person to propose such a future, and he acknowledges that if it arrives at all, it’s still a long way off. But his fund is betting that it will.

In may respects, this is a new way of investing (though Polychain isn’t its only practitioner). If Polychain buys the digital tokens that underpin the Golem Project, it is quite literally buying a piece of the operation. And this is the only way of buying into the operation. The Golem Project isn’t really a company. The project has no shares, only blockchain tokens. If Polychain buys these tokens, it isn’t quite a VC investment. And it’s not really a stock purchase. It’s a third thing that doesn’t really have a name yet. “There is no company. There is no stock,” says Richard Craig, CEO of another crytocurrency-driven hedge fund, Numerai, who has also invested in Polychain. “But this feels like a stock.”

Go Back to Top. Skip To: Start of Article.