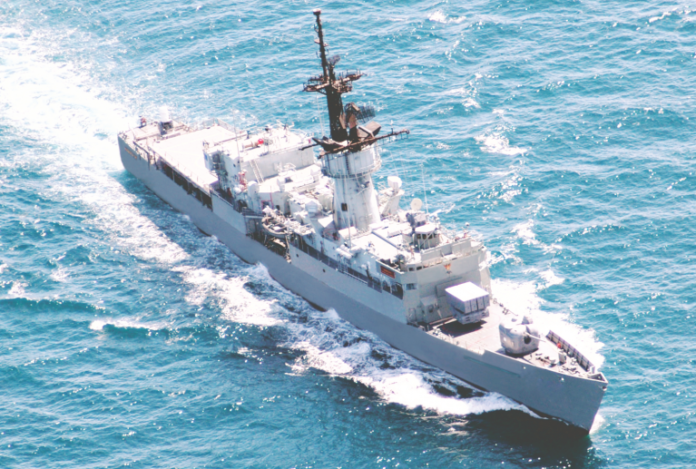 A seastead launched by an early bitcoin adopter off the coast of Thailand has run into trouble with local government. The Thai Navy boarded the structure Saturday, claiming it violates criminal law, which is punishable by death or life imprisonment. The owner claims that his floating home is located outside of Thailand’s maritime boundaries.

American early bitcoin adopter Chad Andrew Elwartowski and his Thai girlfriend, Suprenee Thepdet aka Nadia Summergirl, launched a seastead on Feb. 2 off the coast of Phuket, Thailand. However, the Thai Navy boarded the structure Saturday and accuses the couple of breaching the country’s Criminal Code, Section 119.

According to Siam Legal international law firm, “Section 119: Intent to cause injury to the nation” states:

Whoever does any act with intent to cause the country or any part thereof to descend under the sovereignty of any foreign state, or to deteriorate the independence of the state, shall be punished with death or imprisonment for life.

Elwartowski, also known as Elwar in the Bitcointalk and Reddit Bitcoin communities since 2010, used his early bitcoin investment income to build the seastead at a cost of about $150,000. He is also in the early stages of launching a business, creating seasteads for others who would anchor near his own home. His company is scheduled to start selling the first 20 floating homes Monday, April 15. At press time, 69 potential seasteaders have expressed interest to join him. Last weekend a workshop was held at the seastead where Elwartowski taught diving and other skills needed become seasteaders.

The seasteading couple aimed to launch a new sovereign state by creating new land far enough offshore that it would be recognized as independent by the U.N. Convention on the Law of the Sea. Elwartowski claims that his seastead, which he named “XLII,” is located outside of Thai maritime territory, beyond the 12-mile sovereign territory claim. His website describes:

We are just beyond 12 nautical miles from shore. Under international law this puts us just outside of the territorial waters of Thailand but within their 200 nautical mile exclusive economic zone … This means that we are not subject to Thailand laws other than those that deal with their natural resources … and no interfering with their customs.

However, a source told the Bangkok Post that the claim that the seastead is built on international waters is untrue, adding that the police are additionally investigating the Phuket-based Thai construction company responsible for building the platform for possible financial misconduct.

Local TV channel The Nation elaborated that “it is a violation of the sovereignty rights of Thailand that are beyond the boundaries of Article 56B and Article 60, paragraph 7 and paragraph 8 of the Sea Law Convention 1982.” The two sections of the U.N. maritime convention state that within the 200 nautical-mile range of a country, referred to as ‘the Exclusive Economic Zone,’ “the coastal state has jurisdiction as provided for in the relevant provisions of this convention with regard to… the establishment and use of artificial islands, installations and structures.”

Thai Authorities to Remove the Structure

Vice-Admiral Sittiporn Maskasem, commander of the Royal Thai Navy Third Area Command, sent officers to the seastead Saturday, which they reported to be 15 nautical miles southeast of Racha Yai island, the Bangkok Post conveyed. Navy officers boarded the platform for inspection after failing to make radio contact with anyone on it. No one was home when the Navy boarded and the whereabouts of Elwartowski and Summergirl are unknown at press time.

The Phuket Marine Office is trying to contact the couple and the Navy has called on the harbor master in Phuket to remove the structure. The authorities seek immediate removal, citing that the lack of electricity around the structure could affect shipping routes, local media reported the Navy explaining.

A source further told the Bangkok Post that the structure would have a negative impact on the country’s shoreline, noting that “If it is left untouched, it will hinder ship navigation since the route is used for the transport of oil to Phuket.”

What do you think of this seastead and the action the Thai Navy is taking? Let us know in the comments section below.

Images courtesy of Shutterstock, the Nation TV, Mgr Online, and the Thai Navy.

Xapo CEO, Wences Casares, believes that it would be “irresponsible” for any investor not to have at least a one...