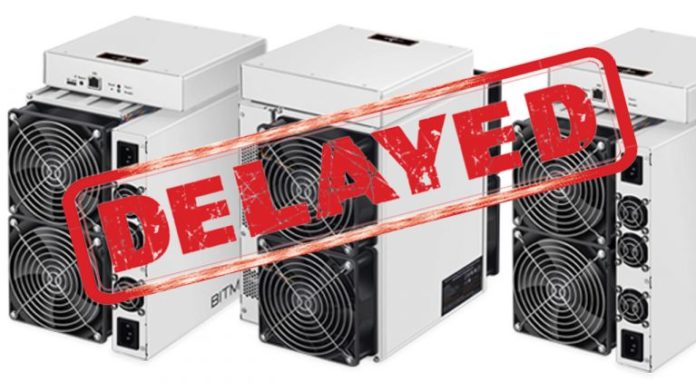 Bitmain has delayed shipments of its Antminer bitcoin mining machines by three months, as the tussle between co-founders, Jihan Wu and Micree Zhan Ketuan, for control of the company intensifies.

According to a post on Bitmain’s official Wechat account, the Beijing-based bitcoin miner maker said customers whose orders were due for delivery in June and July will have to wait until September and October.

The equipment is typically ordered three months prior to delivery. That means the postponed shipments may have been ordered around March, making this a costly six-month wait for the affected bitcoin miners.

Bitmain said in the Thursday announcement that the delay is a result of “external interference over the company’s management.” Jihan Wu’s faction is reportedly in control of the company’s Wechat account.

The company is offering two options to its customers as compensation for delays. First, customers can write to Bitmain requesting that deliveries are fast-tracked. If they do not receive the equipment after 60 days of submitting the request, customers can ask for a refund.

The second option involves cash coupons equivalent to theoretical mining revenue between now and the actual delivery date. Those coupons could be used to pay for future orders. The two options cannot be exercised together.

Wu and Micree Zhan are currently engaged in a bitter struggle for Bitmain’s control. The two co-founders ran the company together for many years, but Zhan was booted out of the firm by Wu last October in controversial circumstances.

In June, a court in China ruled in favor of Zhan, allowing him to return to power. Zhan, who owns a 37% stake in the company, has now assumed control of Bitmain’s Shenzhen-based operations.

However, the feud is evidently starting to impact negatively on Bitmain’s operations. In July, some 10,000 Antminers, worth about $10 million, were reportedly “stolen” from a mining facility owned by the company in Inner Mongolia. Some reports say the equipment was “illegally transferred”.

In the wake of the latest operational hiccups, Thomas Heller, global business director at bitcoin mining pool F2pool, urged miners to switch to machines operated by Bitmain’s competitors such as Microbt and Canaan.

What do you think about Bitmain’s delayed shipments? Let us know in the comments section below.

Bitcoin has been seeing some incredibly bullish price action throughout the past several days and weeks The cryptocurrency is now...