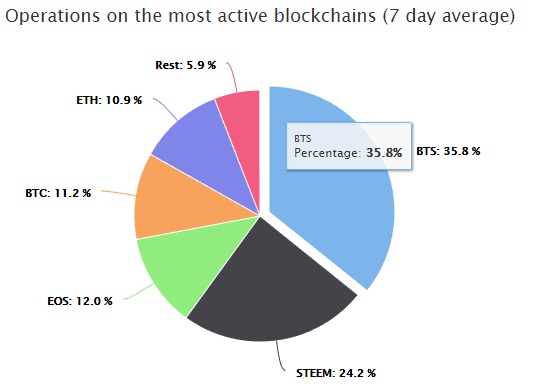 According to blocktivity, 29th-ranked cryptocurrency Bitshares (BTS) has become the most actively used blockchain in the world based on the last 7 day average. 1,706,310 operations were performed inside the BTS blockchain over the last 24 hours, averaging 1,622,870 operations per day. BitShares made up almost 36 percent of blockchain operations in the world this week.

As reported by Cryptovibes, Steem ranked second in activity in the last 7 days, accounting for 24.2 percent of total blockchain operations. EOS, Bitcoin and Ethereum placed 3rd, 4th and 5th respectively.

First launched in 2014, Bitshares is a decentralized exchange where users can trade dollars, gold, Bitcoin and other derivative assets without counterparty risk. Founded by Daniel Larimer, the platform was originally known as ProtoShares. Larimer worked on BitShares until 2016, when he left the company to create the cryptocurrency-powered social networking platform Steemit, and later EOS.

A Testament to Daniel Larimer

It’s worth noting that the top 3 most actively used blockchains in the world were all created by Daniel Larimer. The Colorado native began working on developing cryptocurrency in 2009 after becoming disillusioned with the ethics of fiat currency and global government control over the money supply. He famously referred to the government as an “organized crime syndicate” and says that he aims to create a truly free market outside of any centralized control.

Building off the BitShares model, Steem has become one of the most popular social networking platforms in the world, paving the way for the growing popularity of cryptocurrency rewards programs for content creators. Meanwhile, EOS remains ranked in the top 5 largest cryptos in the world and is poised to offer a technologically superior alternative for dApp development when compared to Ethereum.

The American National Standards Institute (ANSI) will discuss blockchain and artificial intelligence (AI) issues at its next Legal Issues and...