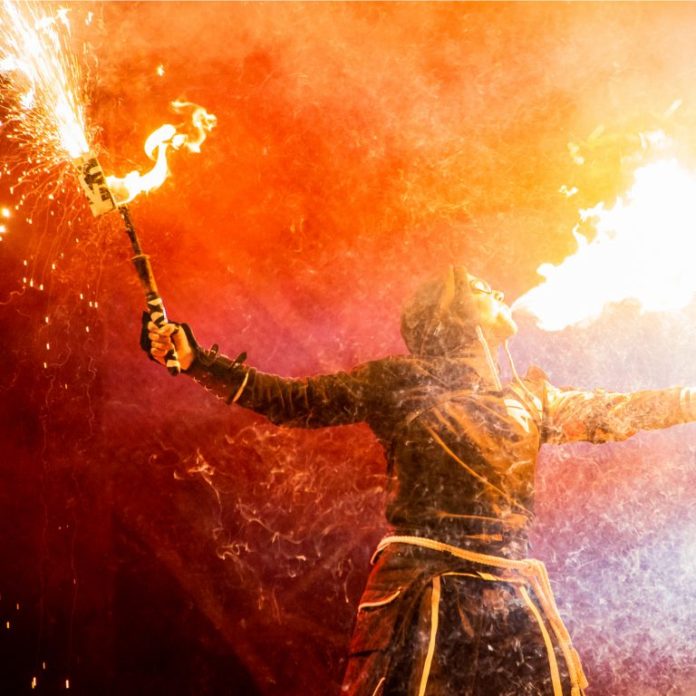 Cryptocurrency conferences provide a chance to absorb seminars, panel discussions, and keynote speeches from leading industry figures, and to conduct business face-to-face. At least that’s their official purpose. Unofficially, they’re an experiential extravaganza that puts some of the world’s most famous music festivals to shame.

There were moments at the Futurama Blockchain Innovators Summit, held in Dubai on May 3-6, when you could have sworn you were at Burning Man. It wasn’t so much the appearance of Brock Pierce as star panelist, a man so enamored with Burning Man he actually got married there. Rather, it was the daily itinerary in which blockchain talks were squeezed in around networking events instead of vice-versa.

“The most likely way to get me to attend your conference is to throw really good parties,” chuckles Brock Pierce midway through an Altcoin Buzz video of the event. The organizers of Futurama, which included Coinsbank, duly obliged, throwing a lavish series of parties and meetups that included a harpist playing in the middle of the desert; fireworks; dune-riding in 4x4s; and a lavish final party hosted on one of the largest yachts in Dubai. Instead of adhering to a rigid schedule, the conference would start once everyone had assembled each morning, which meant that everything ran fashionably late. No one seemed to mind.

One of the reasons why conferences such as Futurama and Consensus have come to be defined by their hospitality rather than their itinerary owes less to one upmanship and more to the power of face-to-face interactions. As attendees as these and many other blockchain conferences this year will attest, the most valuable deals weren’t sealed in the meeting rooms or conference halls; they were concluded with bumped fists while sharing shiskas at the Desert Rose Party; in the hot tub aboard a yacht with the city lights glittering across the bay; in the rooftop bar 37 floors up a New York skyscraper.

Tickets for cryptocurrency conferences don’t come cheap, with admission to a three-day event typically running into the thousands of dollars. Delegates are only too happy to pay up though, and to avail themselves of the open bars and sumptuous banquets, and to mingle with the “experience girls” enlisted to address the gender imbalance and make the Instagram pictures prettier. But that’s not really what it’s about. Such trappings are more a means to an end; an ice-breaker that enables strangers from opposing sides of the world to form fledgling friendships and profitable partnerships. That’s why delegates don’t calculate an event’s value by the cost of admission – they base their assessment on the value of the business generated.

Just as attending a music festival is more about cutting loose than it is about the music, blockchain conferences aren’t really about cryptocurrency. Sure, there’s a panel discussion on blockchain scaling you might squeeze in if there’s time, and a keynote on AI that looks interesting, but these things are optional. The parties are where the real action happens.

There’s a strong case for bemoaning the more egregious examples of excess at crypto conferences; the Aston Martins given away aboard a luxury cruise at Consensus and the celebrity rapper after-parties, which do little to enhance the industry’s perception. Eliminate the social element altogether, however, and you’d be left with a bunch of men in suits taking notes in a draughty conference hall. Due to the digital nature of cryptocurrency, whose proponents are as distributed as the bitcoin ledger itself, conferences are one of the few opportunities for interacting in the same physical space. Blockchain events are the new music festivals.

Do you think cryptocurrency conferences are getting more flamboyant? Let us know in the comments section below.

Images courtesy of Shutterstock, Coinsbank, and The Void.

On Thursday, May 31, IOTA officially announced a partnership with Norway’s largest bank, DNB ASA. The bank is exploring the...