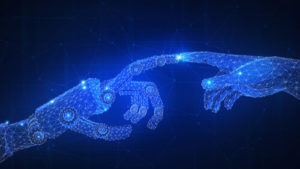 I’ve always been fascinated by the videogames industry. For over two decades now, I’ve watched it evolve and change at a much faster pace than any entertainment medium before it.

Given its technology-driven nature, it’s no surprise that video gaming has been able to grow so much, so quickly. Even more so than other technology-based forms of entertainment, such as cinema and television, the games industry has been able to utilize the latest advancements in computing, communications and connectivity to develop more sophisticated products, create ground-breaking experiences and foster fan communities.

Of all the technologies that has helped shape the modern video gaming landscape, Internet has had the most profound impact on the sector. It allowed people to play games together, to compete with one another, to share a gaming experience with their friends. It allowed the medium to become the entertainment behemoth it is today.

Internet, of course, has had a transformative impact on many other industries and has laid the foundations for many technological breakthroughs. One of those is arguably the hottest technology right now and I believe it can help gaming grow even bigger. It’s the blockchain.

The ongoing shifts towards online gaming and digital distributions has allowed video games to become something more than simple entertainment products. While the so called ‘live gaming services’ have their critics among gamers, it cannot be denied that they offer something different than the traditional single-player experience. It is also undeniable that a vast portion of the gaming community finds these experiences appealing. Last month, for example, 10 million players logged into the hugely popular battle royale shooter Fortnite to attend an in-game Marshmello concert.

The rapidly growing popularity of online gaming has also allowed video game companies to develop new monetisation models centred around live services. Online gaming experiences fuelled by virtual economies that allow players to buy in-game cosmetics and other virtual goods with virtual coins. Virtual coins that can be acquired through play or with real money. When done right, these monetisation models can be very beneficial to both businesses and consumers, providing a steady stream of revenue for the company, while at the same time enabling the player to experience a game without a hefty upfront fee. However, this approach to monetisation becomes problematic when a company gets too aggressive in its implementation. Blockchain can provide the solution to this problem.

Today, most popular online games have some form of ‘premium’ currency that can be acquired with real money: Fortnite has V-Bucks, Activision Blizzard’s Call of Duty series has CoD points, Ubisoft’s For Honor has Steel and so on. However, these ‘currencies’ have little value outside a particular game they are designed for. While it is possible for players to acquire CoD Points from third-party vendors like Amazon, these points can only be used for buying virtual goods in a Call of Duty game.

The future of Blockchain in Online Gaming

Some would argue that this is not much different than crypto tokens, which sceptics see as not having intrinsic value or real-world applications. However, there is at least one apparent difference between premium game currencies and crypto tokens – unlike CoD Points, crypto tokens are supported by an infrastructure that goes beyond games.

Imagine if instead of a regular premium currency, players could earn a crypto token that was then readily available for them to use outside the game they are currently playing. Imagine if they had the ability to sell this token on a crypto exchange for real money, or store it in their own crypto wallet. This would instantly make such rewards that much more valuable to the player and the gaming experience that much more engaging.  Players would be able to play their favourite game and get something tangible out of it at the same time.

Initially, this would likely create problems for companies, as, naturally, they prefer their virtual economies to remain closed systems. After all, if I have the ability to cash out my crypto tokens, there is a significant chance that I won’t be spending those tokens in-game. And this is certainly a chance that most big video game companies are not willing to take.

However, this approach could also create some exciting opportunities for companies to benefit from stronger player engagement and goodwill. It could open the door for creating robust ecosystems of apps and games, fuelled by blockchain and crypto tokens. Future of Blockchain in Online Gaming

One of the companies already pioneering this approach is Kik, the Canadian social messaging company. In 2017, the company underwent an initial coin offering (ICO), which led to the creation of the Kin token. The company also set up the Kin Foundation, whose goal is to oversee the development of the Kin token and its ecosystem. It quickly became clear that Kik aims to use the token not only as a way for Kik users to make payments within the app, but as means to build a whole ecosystem of apps.

Today, Kin is integrated with over 30 social apps, but Kik has also made steps to expand the coin’s reach to the mobile gaming world. Last March the Kin Foundation signed a deal with Unity Technologies, the company behind one of the world’s most popular game engines, forging a partnership aimed at bringing Kin to the world of video games. Kin released a software development kit (SDK) facilitating Kin integration in Android games. The kit allows developers to integrate a system that rewards players for a variety of activities, such as providing feedback or completing surveys. An app linked to the Kin ecosystem also gains access to the Kin Marketplace, which provides more ways for users to earn or spend tokens.

“Unity Technologies and Kin have partnered to bring cryptocurrency technology to millions of game developers worldwide,” the Kin Foundation announced at the time, while the organisation’s executive vice president of Partnerships Dany Fishel credited the games industry’s openness to new technologies as being what motivated Kin to target the sector for the initial phase of the token’s expansion.

CryptoKitties is certainly not the most sophisticated video game out there, but over the span of just a few days in late 2017 it proved that virtual goods economies can exist and potentially thrive on the blockchain.

One company is looking to take this concept even further. Developed by OPSkins, a platform for video game virtual goods traders, the World Asset Exchange (WAX) is a blockchain protocol that aims to provide an easy way for developers to build virtual goods marketplaces and secure and user-friendly environment for players to trade items.

According to the company’s white paper, “WAX is designed to serve the 400+ million online players who already collect, buy and sell”.

“With the inclusion of WAX’s simple exchange widget, gamers will have access to a worldwide market, with blockchain trust and transaction verification… [the platform] unites everyone, providing security, transaction, and settlement services that will usher millions of new participants into a growing ecosystem,” the document also reads.

Blockchain-based solutions like WAX can be the catalyst for next generation virtual goods economies that connect people across multiple games and entertainment products. More importantly, the blockchain can enable true ownership of virtual items, allowing players to keep any in-game cosmetics they might have acquired even if a particular online game is no longer live.

The post Blockchain in online gaming appeared first on The Independent Republic.

Research from Rutgers University has found a link between trading cryptocurrency and compulsive gambling. Apparently, regular gamblers can view cryptocurrency...