Following a week of bombshell developments in the industry, from the SEC classifying the DAO Tokens as securities to the arrest of Alexander Vinnik for allegedly laundering 4 billion dollars through BTC-E, the inaugural Blockstack Summit kicked off on the morning of July 27th with an eye toward innovative layered protocols that can exist on top of existing blockchains.

Hosted at the Computer Science Museum in Mountain View, CA, the conference began with a discussion of transitions between the “terminal model” of computing and the personal computer over the course of digital history. In their talk, Blockstack co-founders Muneeb Ali and Ryan Shea discussed how recent moves toward cloud computing and storage take away the data privacy and security guarantees long afforded by personal computing. In response to this problem, Blockstack and other decentralized applications built on top of various blockchains aim to give consumers the ability to control, manage and streamline their own digital lives.

Elizabeth Stark, co-founder and CEO of Lightning Network, then discussed recent technical developments that allow for both higher transaction volumes through specialized off-chain payment channels and transactions between two different types of cryptocurrencies. These developments are saving both parties transaction fees in the long run and helping alleviate some of the scaling issues that bitcoin and other currencies have been facing in recent years.

Bram Cohen, BitTorrent creator, took the stage later with Blockstack’s Ali to discuss developments in the space. When asked about the scaling debate and recent implementation of SegWit, Cohen drew chuckles from the crowd with an adamant declaration that “SegWit solved a bug that should have been solved when Bitcoin was created.”

Cohen also endorsed Bitcoin Core and shared his doubts regarding the technical competency of the teams behind some of the more recent ICOs of ERC20 tokens built on top of the Ethereum blockchain: “As a general rule, if you don’t have the skills to build your own token from scratch, you shouldn’t run an ICO.”

Nick Szabo, computer scientist and legal scholar, then discussed the origins of contract law, the historical implementation of smart contracts and the next steps the industry needs to take to implement smart contracts in a variety of commercial transactions, both between consumers and companies and between companies themselves.

Drawing on his studies at George Washington University Law School, Szabo advocated for the integration of smart contracts into traditional contract and property law frameworks. Instead of attempting to rebuild legal theory from scratch, developers should work with existing frameworks that have already been debugged for centuries.

Szabo explained a dichotomy of contract law: “dry code,” where an entire agreement can be interpreted and executed by computers based on a number of digital inputs; and “wet code,” or traditional law, where the agreements are interpreted by individual parties based on their own definitions of words and phrasing.

Many industries exist today to help quantify and define examples of “wet code” in the world. Insurance claim adjusters analyze accident reports and eyewitness testimony in order to correctly pay out claims based on fault and the monetary value of the actual damages suffered by each party, for example.

Translating poorly organized data from real-world situations into a series of executable actions based on the terms of an agreement is a valuable service. Rather than call for an abolishment of these systems, Szabo argued that the future of decentralized smart contracts will exist in tandem with the best parts of more traditional finance industries in the coming future. Over the coming years, larger portions of traditional data analysis will become obsolete, performed digitally by more powerful and intelligent computers.

This is not the first time Szabo has spoken on the subject: As early as 2008, Szabo broke down the differences between wet and dry code on his blog, Unenumerated.

Next, Balaji Srinivasan, founder of 21.co and a16z Board Partner, introduced the Nakamoto coefficient, a metric inspired by the Lorenz curve and Gini coefficient to quantify the relative decentralization of different types of cryptocurrencies. By looking at the distribution of power in six subsects of individual cryptocurrencies, Srinivasan was able to compare the relative strengths of different blockchains and networks against attacks that require a majority or supermajority of the power in a system to be compromised.

Srinivasan started by organizing the six essential subsystems of both Bitcoin and Ethereum:

After calculating the amount of power owned by each entity in the six subsystems, Srinivasan was able to calculate a Gini coefficient (dubbed the “Nakamoto coefficient”) based on the relative power concentrations for each subsystem. For instance, if every miner has the same amount of hashpower and receives the same reward, the subsystem would receive a value of 0. If a single miner receives all of the rewards, then the subsystem would receive a value of 1. 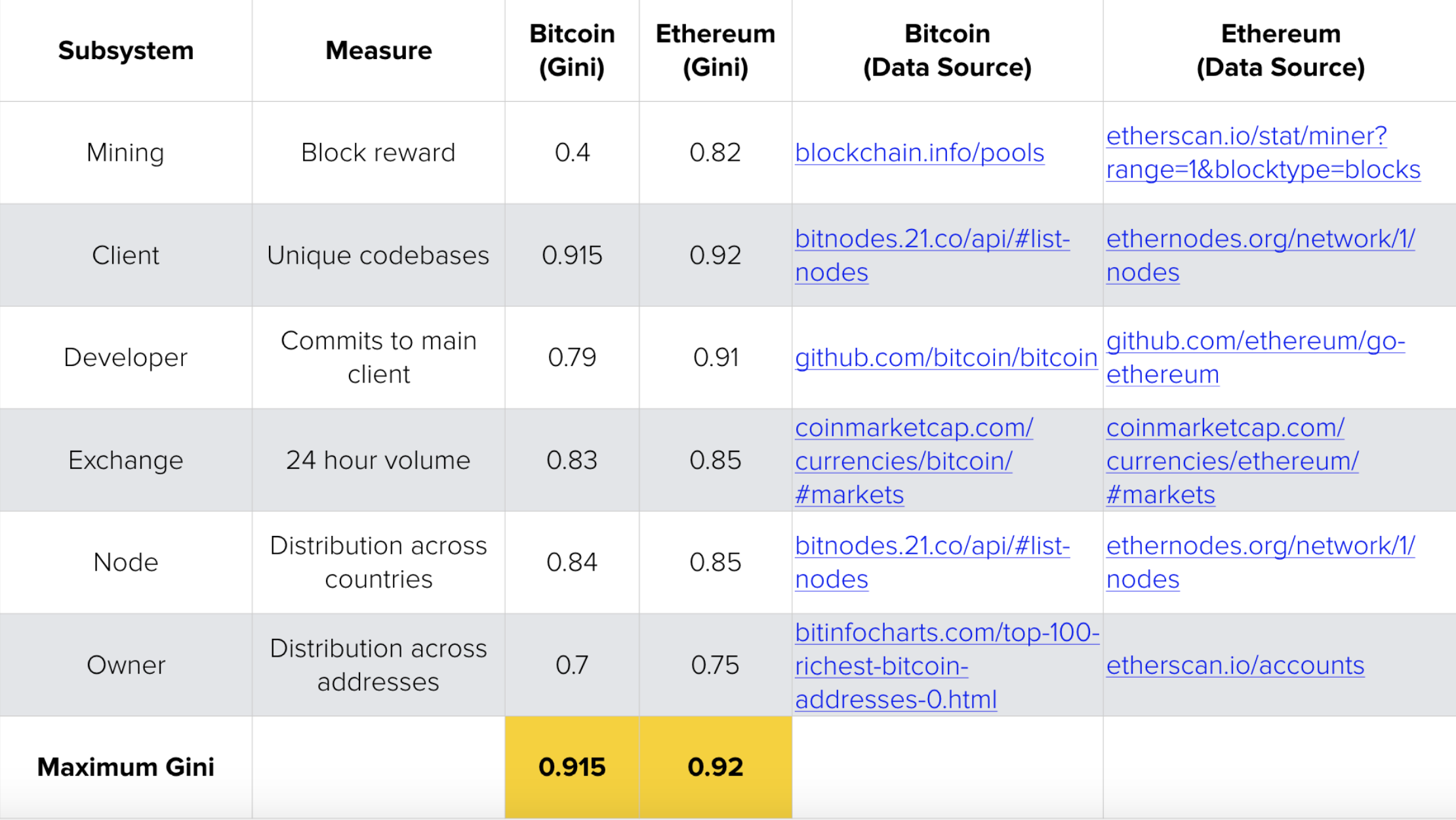 Despite a myriad of differences, both Bitcoin and Ethereum have nearly identical Nakamoto coefficients of ≈0.91, indicating that at least one subsystem in each ecosystem is highly centralized. However, based on Srinivasan’s calculations, it’s clear that Bitcoin is either slightly (client, exchanges, nodes and owners) or drastically (mining and developers) more decentralized than Ethereum. Most surprisingly, Bitcoin’s mining network is far more decentralized than Ethereum’s (0.4 vs. 0.82).

This is the first time Srinivasan has discussed a metric for decentralization of cryptocurrency markets. He has since published his findings, with links to the underlying datasets, on his company’s blog.

After a panel discussing specific use cases for cryptocurrency payments, Wealth and Poverty author George Gilder led a rousing endorsement of a tokenized, decentralized web and its ability to destroy “silos” of the internet created both by countries and companies alike.

Citing the vast amounts of data companies like Facebook, Google and Amazon save and measure about their users’ digital lives, Gilder spoke of a future where individuals can explicitly control the flow of their data, secured by decentralized protocols and powered by tokens.

It was fitting that Blockstack Summit was held in the Computer History Museum, an ode to the stories and artifacts of the information age and its impact on society. With fully restored IBM mainframes, an Apple I and the source codes of dozens of impactful softwares like MS-DOS, Photoshop and Word, the museum served as a backdrop for discussions that look to an open, free and uncensored society of the future.