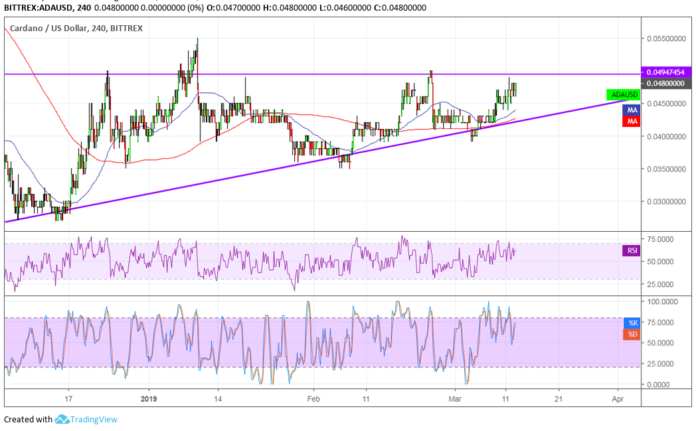 Cardano has formed higher lows and found resistance around the 0.050 mark to create an ascending triangle pattern. Price recently bounced off the bottom and looks prime for a test of resistance.

The 100 SMA is above the longer-term 200 SMA to indicate that the path of least resistance is to the upside. In other words, resistance might be more likely to break than to hold. In that case, Cardano could climb by the same height as the chart formation, which spans 0.0250 to 0.050. In addition, the moving averages line up with the triangle bottom to add to its strength as support in the event of another dip.

A break below support could similarly be followed by a drop that’s the same height as the triangle. RSI is hovering around the overbought levels and may be ready to head south soon, indicating that selling pressure could pick up. Stochastic, on the other hand, seems to be pointing back up to reflect a return in bullish momentum.

Cardano might be drawing upside momentum from the anticipation for its upgrade. Currently, the testnet is having Daedalus 0.13.0 and Cardano SL 3.0.0 and a host of network improvements. The mainnet is expected to be launched in April, which explains the steady upside pressure on price as traders might be getting in early.

The community is also looking forward to the new consensus program named ‘Ouroboros BFT’ which would work as a bridge for those who are transiting from Ouroboros Classic (existing protocol) to Ouroboros Genesis (Shelley era protocol).

Ouroboros BFT will not be active immediately after deployment of the Cardano 1.5 release. Once activated, Ouroboros Classic protocol will not work, thereby creating a hard fork that will likely be executed smoothly.

Further developments could spur an upside breakout from the consolidation pattern, but any complications or security threats could force price to retreat.