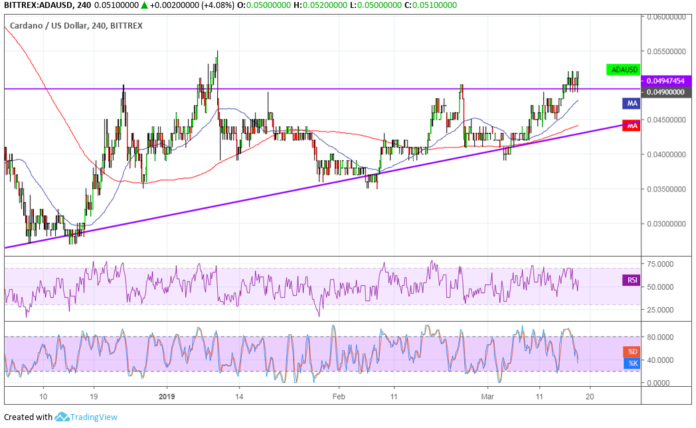 Cardano has been consolidating inside an ascending triangle pattern on its 4-hour time frame but is slowly breaking above the resistance to confirm that bulls have won over. In that case, price could climb by the same height as the chart formation, which spans 0.0275 to 0.0500.

The 100 SMA is above the longer-term 200 SMA to confirm that the path of least resistance is to the upside or that the climb is more likely to gain traction than to reverse. The gap between the moving averages is also widening to reflect stronger bullish momentum. Both might hold as dynamic support in the event of dips as well.

RSI is on the move down to signal that selling momentum is in play and the oscillator has some ground to cover before indicating oversold conditions. This suggests that sellers could stay on for a bit longer, possibly even dragging Cardano back inside the triangle pattern.

Stochastic is heading lower to show that bearish pressure is in play. This could keep sellers in the game until nearby support levels at the moving averages or the triangle bottom are tested.

Still, Cardano has a lot to bank on as its volumes have almost doubled and a Coinbase listing could inspire another big rally. The exchange said that it was looking into this digital asset back in Q2 2018 but has yet to provide support and to include it in its listings.

XRP and XLM have been the recent additions, and Cardano is rumored to be next. Speculations seem to be mostly driving the gains so far, so any disappointment could bring a wave of profit-taking. Confirmation, on the other hand, could be enough to sustain the climb as increased volumes are to be expected.