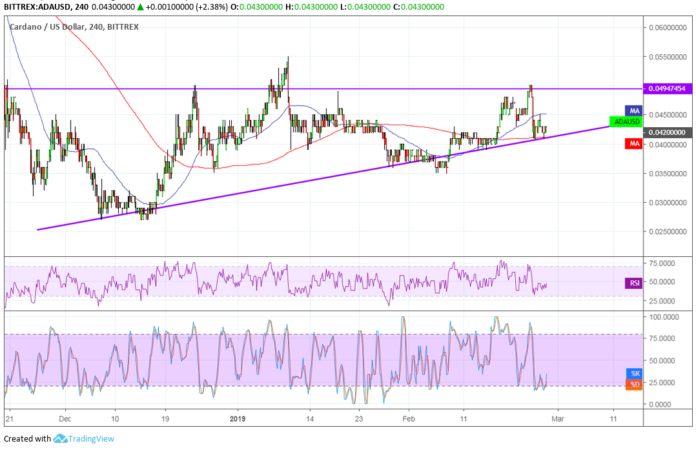 Cardano has formed higher lows and found resistance around 0.050 to create an ascending triangle formation on its 4-hour chart. Price is currently testing support and could be due for a bounce back to the top.

The 100 SMA is above the longer-term 200 SMA to indicate that the path of least resistance is to the upside. In other words, support is more likely to hold than to break. The 200 SMA also lines up with the triangle bottom to add to its strength as a floor.

RSI is also turning higher to reflect the presence of bullish momentum. If buyers are strong enough, they could take price past the triangle top and onto a rally that’s the same height as the triangle. This pattern spans 0.027 to 0.050 so the resulting climb could be around 0.023.

Similarly stochastic is making its way up after dipping to the oversold region, reflecting exhaustion among buyers and a return in bullish pressure. However, if sellers still stay in control and push for a break below support around 0.040, a downtrend of the same size as the triangle could ensue.

There haven’t been much developments on the Cardano front recently, which likely explains why this particular coin is stuck in consolidation. Still, it was able to join in on the recent rallies in the cryptocurrency market on account of improved sentiment.

Whether or not this optimism can be sustained is another question as traders appear to be holding out for the next major development. A lot of analysts are sticking to their bullish estimates but it looks like the rest of the markets would rather see actual progress instead of relying on expectations.

One thing to look forward to is the Fidelity institutional platform launch next month. Although Cardano is not included in the mix yet, this could set a precedent for other digital assets and institutional interest.