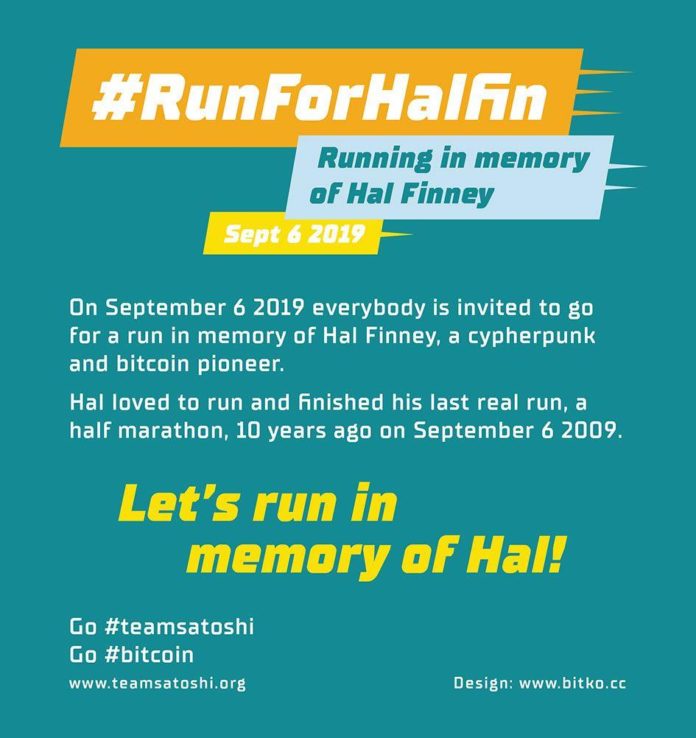 On August 28, 2014, cypherpunk and Bitcoin pioneer Hal Finney passed away due to complications with amyotrophic lateral sclerosis (ALS), which he had been fighting for nearly five years.

Prior to being diagnosed, the recipient of the first bitcoin transaction was an avid runner who never shied away from expressing his hobby on Twitter, even training for the prestigious Boston marathon.

Inspired by Finney’s dedication to Bitcoin and the sport of running, the team behind the Satoshi Freeathlon is organizing a worldwide event to mark the fifth anniversary of the cypherpunk’s death. The specific date for the event was chosen because, according to Fran Finney, her husband’s “last real run” took place September 6, 2009.

Ten years after Finney’s final athletic achievement, Team Satoshi is inviting enthusiasts from all over the world to go on a run and post their progress on Twitter using the #RunForHalFin hashtag. A special entry for the event has also been posted on the Team Satoshi website.

“I looked up Hal Finney’s Twitter quite a few times,” Team Satoshi leader Vitus Zeller told Bitcoin Magazine. “And there I saw that he loved to run. He was partly an inspiration for starting Team Satoshi, too. Therefore, I knew for a long time that I wanted to dedicate a Team Satoshi community event in his memory and I know that he’d love the idea.”

Hal Finney was the first person on the cypherpunk mailing list to show enthusiasm toward Bitcoin. He believed so much in the disruptive potential of Satoshi Nakamoto’s cryptographic currency that on January 10, 2009, he estimated that each bitcoin would be valued at $10 million if all of the world’s wealth was to be invested in it. This bullish prediction came just one day prior to his famous and frequently referenced tweet “Running bitcoin” — the first social media reference of Satoshi’s project.

Before Bitcoin, Finney had a prolific career as an Atari video game developer and as a developer of cryptographic tools. In the early 1990s, he was one of Philip Zimmermann’s first hires at the PGP Corporation, where he laid the foundations for the “web of trust” concept through the world’s most popular email encryption service.

In 2014, Finney broadcasted to the cypherpunks’ mailing list a proposal for Reusable Proof of Work (RPOW) — a cryptocurrency prototype whose technological foundations were used by Satoshi Nakamoto for bitcoin mining.

As revealed in his short essay “Bitcoin and Me,” Finney worked on Bitcoin code until the last days of his life. He was still passionate about the great potential of Satoshi’s invention and remained positive about the future of BTC as a currency, regardless of market dynamics. Had he not embraced Bitcoin early on, it’s very possible that Satoshi Nakamoto wouldn’t have reached the same amount of success with his project — Finney is well-known for his bug fixes and methodical approach to coding.

Considering the prolific contributions that Finney has made to Bitcoin, as well as his long-time love for running, the idea of joining the #RunForHalFin campaign on September 6, 2019, seems to be almost a moral duty for every community member who is physically fit enough to take the challenge.

There is no sign-up fee and there is no right or wrong way to join the movement — there are no instructions on how you should announce your participation nor any restrictions on where or for how long you should run.

“I think everyone can simply go for a run and post a picture of their point of view under the #RunForHalFin hashtag,” Zeller said.

The post Celebrating a Pioneer, Bitcoiners Will #RunForHalFin appeared first on Bitcoin Magazine.