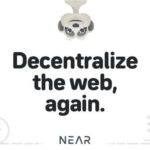 A recent report has revealed that a new public blockchain called Near has just raised more than $12 million in a funding round led by crypto hedge fund Metastable Capital with many supporters such as Ripple’s Xpring, Pantera, and Coinbase Ventures.

Near is reportedly equipped with the tools and features required for developers to create decentralised applications in direct competition with industry leaders like EOS, Tron, and Ethereum.

According to the press release, the team at Near comprises programming veterans from Facebook, Google, and other major tech companies. The team’s main aim is to radically increase the rate at which transactions are being carried out and eliminate any theoretical capacity limit.

The Chief Executive Officer of Near, Alex Skidanov said that:

“Assembling a world-class development team and creating the technology is really just the first step – the next is launching a global movement that puts blockchain technology in the hands of the developers and entrepreneurs who will carry it to consumers everywhere via the apps and businesses they create.”

Notably, other major platforms have been trying to accomplish mainstream adoption even though gaming and gambling DApps are consistently been ranked as the most popular. TRONbet is presently being ranked number one with $8.4 million in transactional volume for the past 24 hours making it very much higher than Dice on EOS which take the second position with $193,000 over the same period.

The team at Near stated that:

“The NEAR Protocol makes decentralised applications nearly as easy to build and use as today’s web apps while achieving global scale by using a novel sharding approach and consensus mechanism called Nightshade.”

Furthermore, due to the rapid rate at which blockchain and crypto industry continue to grow, leaders in the industry are rapidly diversifying to create their brands and grow their ecosystems, moving fluidly from building crypto exchanges and fiat in-ramps to payment platforms to cross-border payment solutions to decentralised applications to stablecoins to custody services.

Visa Invests in a Crypto Company For the Second Time

According to a recent report, global payment giant– Visa, has made its second investment in a crypto initiative by leading...