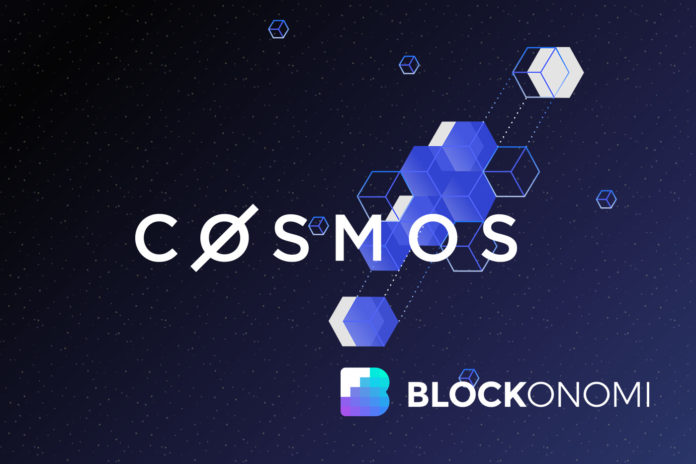 Optimized around blockchain interoperability, the Cosmos Network is set to become a chain of chains. The project will be the latest high-profile play to land in the cryptoeconomy, as its mainnet is prepped for launch on March 13th. Here’s what those unfamiliar with the upstart should be looking for.

Strictly speaking, Cosmos will not be one blockchain but rather many parallel chains.

“Cosmos is a decentralized network of independent parallel blockchains, each powered by BFT consensus algorithms like Tendermint consensus,” the project’s website reads.

BFT stands for Byzantine Fault Tolerance, as a consensus mechanism is secure if it maintains such tolerance. While Bitcoin and Ethereum presently leverage Proof-of-Work (PoW) to achieve consensus via mining, Cosmos leverages a version of Proof-of-Stake (PoS) that involves staking ATOM governance tokens.

Tendermint refers to two things, Tendermint Core and Tendermint consensus. The former is open-source blockchain infrastructure that pre-packages its networking and consensus layers, while the latter is the consensus algorithm leveraged within that infrastructure.

Cosmos is built atop both. And within the Cosmos ecosystem, its many constituent blockchains are called “zones.” The main zone is the Cosmos Hub, which will act as a parent ledger that is secured through validators.

Such a system is designed to maximize the possibilities of interoperability between blockchains, per the Cosmos whitepaper:

“Such flexibility allows Cosmos zones to act as bridges to other cryptocurrencies such as Ethereum or Bitcoin, and it also permits derivatives of those blockchains, utilizing the same codebase but with a different validator set and initial distribution. This allows many existing cryptocurrency frameworks, such as those of Ethereum, Zerocash, Bitcoin, CryptoNote and so on, to be used with Tendermint Core, which is a higher performance consensus engine, on a common network, opening tremendous opportunity for interoperability across platforms.”

The project’s community is making the final preparations for its March 13th mainnet launch after its incentivized Game of Stakes testnet concluded successfully last month.

The #GameofStakes is officially over. Wrapping up this incredible experience, Game Master @zmanian
rings in the mainnet with a Closing Ceremony

Congratulations validators and thank you to those who played, watched, and engaged with us.

Now, a Genesis Ceremony has been launched that will determine the inaugural validator base that will boot the Cosmos Network. 100 validators will be chosen from a group of participants who submit a “gen-tx” — a genesis transaction that marks a commitment to “bring your validator online by the recommended genesis time.”

The Genesis Ceremony has begun

Gentx collection starts now. You have until March 12 to submit a valid signature. Follow the gentx procedure in the Cosmos launch repo

“More than 2/3 of the voting power of this set must be online and participating in consensus in order to create the first block and start the Cosmos Hub,” the project’s GitHub notes.

Three Mainnet Phases on the Horizon

The leadership of the Cosmos project has said users should expect three development stages to follow the mainnet’s launch.

The first of these stages will be marked by the network marching toward stability. The Cosmos team has said that “halts and other forms of failure” are to be expected during this time, and because things are likely to be changed, the trading of ATOMs is discouraged during this period.

“In this phase, we strongly recommend that you do not arrange to trade Atoms (eg. by legal contract as they will not be transferable yet) as there is the risk of state being reverted,”

the Tendermint project’s Head of Communications Christine Chjango has said.

In the second mainnet stage, transfers on the Cosmos Network will be activated. And in the final stage, the project’s builders will activate the Inter-Blockchain Communication (IBC) protocol, which will create “a base layer for the creation of communicating blockchain architecture.”

It remains to be seen when these phases will be entered going forward. But what is already clear is that some stakeholders in the cryptoeconomy think Cosmos’s interoperability possibilities pose implications far beyond its own network.

Cosmos is extremely Good for Bitcoin

The post Cosmos: The “Internet of Blockchains” Arrives to Connect the Cryptoverse appeared first on Blockonomi.

Last year was hard for the entire crypto market, even for the world’s number one altcoin, Ethereum, which experienced a...