Bitcoin’s price has gained about 24 percent in the 24 hours to press time, trading at an average of  $8,280, according to CoinMarketCap.

Altcoins are also showing  robust growth, with all the top 100 coins in the green, gaining as much  97 percent over the last 24 hours to press time. In the top 10 coins, NEO and NEM have increased by 55 and 46 percent respectively, while Bitcoin Cash (BCH) and Ethereum (ETH) gained up to 33 percent at press time. 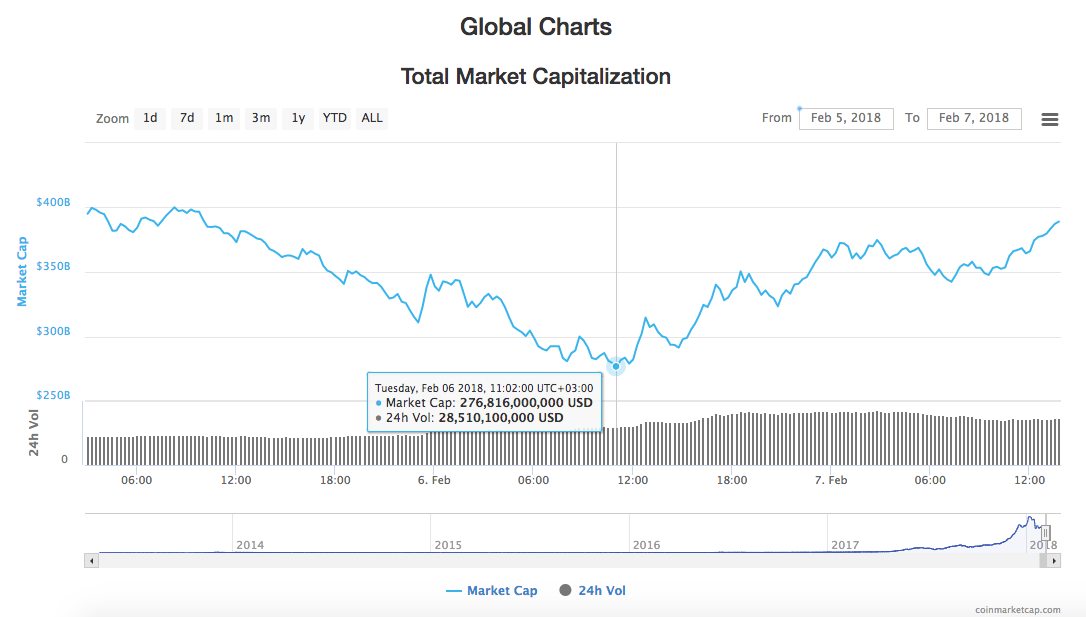 In addition to the general movement of the market, the rebound is can also be attributed to the outcome of the hearing on cryptocurrency and Blockchain held yesterday, Feb. 6, by the Securities and Exchange Commission (SEC) and Commodity Futures Trading Commission (CFTC). During the hearing, CFTC chairman J. Christopher Giancarlo expressed optimism about Bitcoin with regard to the technology behind it, Blockchain or Distributed Ledger Technology (DLT):  “If there was no Bitcoin, there would be no DLT.”

Cointelegraph correspondant Joseph Young tweeted this morning, Feb. 7, regarding the crypto market’s positive response to yesterday’s cryptocurrency hearing in the US:

Yesterday, Feb. 6, Litecoin founder Charlie Lee tweeted about the overall volatility of the crypto markets and the benefits of staying bullish in the long-term, noting “Those that can withstand such a drop without flinching are the ones with lambos eventually. The others pay for these lambos.”

Now you see how volatile this market is. I wasn’t predicting that LTC will get to $20. I was saying that I’ve seen MANY 90% drops from ATH in BTC and LTC. Those that can withstand such a drop without flinching are the ones with lambos eventually. The others pay for these lambos. https://t.co/ozcR11N68o

Ran Neuner, the host of CNBC’s Cryptotrader, kept up his bullish stance in a tweet as the market saw an uptick yesterday, Feb. 6.

Shorts getting squeezed and the uptick begins. I hope you picked up what you wanted in the sale!

Litecoin (LTC), after LitePay and LitePal was one of the first to rebound and it will for sure be one...