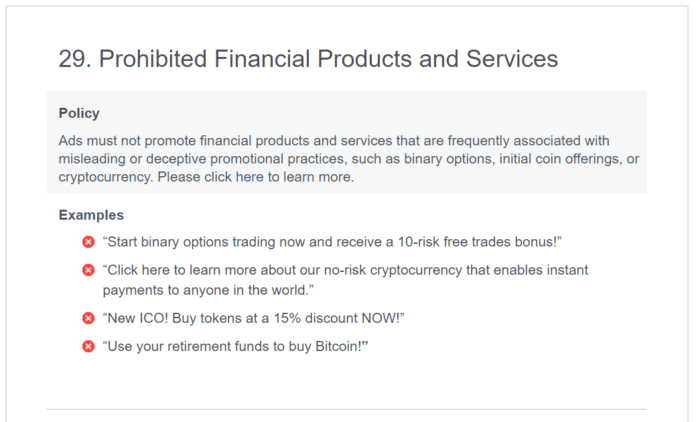 In recent weeks, some of tech’s largest companies have been leading a crusade against cryptocurrency-related advertising on their platforms. Facebook, Google, and Twitter are all reportedly stanching the flow of cryptocurrency, ICO, and other related ads on their websites and, for Google, across any of its ad services.  The cryptocurrency ad ban comes at a time when cryptocurrencies are starting to come under the purview of the international political arena. Though interest in the digital trend reached a fever pitch at the end of 2017, crypto has been the subject of more formal legislative discussions in the past two months than it has since Bitcoin’s creation in 2009.

At this week’s G20 summit in Argentina, politicians from some of the most powerful nations in the world came to the conclusion that, while not acting as official currencies, cryptocurrencies represent a legitimate asset class, and the governing forum has made calls for a clear direction on unified, global regulations by July of this year.  Meanwhile in the United States, the US House of Representatives held a subcommittee hearing on ICOs, cryptocurrency, and blockchain technology on March 14th.  Coming out of the meeting, Congress released a joint report with Minority News on the benefits and potential of blockchain/distributed ledger technology.

In a War of Words, Industry Giants Play Follow the Leader

Take these progressive legislative developments alongside (arguably) regressive ad policies in the private sector and investors and enthusiasts alike are left with conflicting messages: at a time when governments are looking to regulate and reap the benefits of new technology, social media and tech giants want nothing to do with it.

On January 30th, Facebook began the cryptocurrency ad ban when it released a blog post announcing updates to its ad policy.  The change, Product management Director Rob Leathern argues, is meant to protect Facebook’s users and make the social media hub safer.  “”Misleading or deceptive ads have no place on Facebook,” he writes, continuing to say,

“We’ve created a new policy that prohibits ads that promote financial products and services that are frequently associated with misleading or deceptive promotional practices, such as binary options, initial coin offerings and cryptocurrency.”

The holistic ban, the post indicates, is in the best interest of the community until Facebook can formulate a strategy for targeting fraudulent ads directly.  Until then, any crypto-related ads won’t see the light of day on the social media network and its subsidiaries, Instagram and Audience Network:

“This policy is intentionally broad while we work to better detect deceptive and misleading advertising practices, and enforcement will begin to ramp up across our platforms including Facebook, Audience Network and Instagram. We will revisit this policy and how we enforce it as our signals improve.”

Google was the first to follow-up on the cryptocurrency ad ban, revealing a change to its own advertising policy this month.  The ban is across all of Google’s AdWord services and is to take effect in June, according to the post:

“In June 2018, Google will update the Financial services policy to restrict the advertisement of Contracts for Difference, rolling spot forex, and financial spread betting. In addition, ads for the following will no longer be allowed to serve:

Any advertisers who who wish to publish ads for “Contracts for Difference, rolling spot forex, and financial spread betting” will now have to apply for a certification from Google come March.

Today, Twitter jumped on the bandwagon with its own cryptocurrency ad ban that follows many of the same guidelines as the Facebook and Google bans.

The All or Nothing Approach

Instead of cherry picking which ads to trash and which to keep, Google and Facebook have opted to put the whole issue to rest with a blanket ban.  The reasoning here is simple enough: why filter through for legitimate projects when the market itself is still largely unregulated and the investing practices are still likewise largely stigmatized?

And this approach is wholly unwarranted.  In a realm where pump and dumps reign and fake news accumulates faster than a Donald Trump tweet storm, investors are often at the behest of their own knowledge and agency.  There are few, if any, buffers in place to protect consumers from scams, especially in the realm of ICOs.

Separating the Wheat from the Chaff

Take the Giza hardware wallet , for instance.  The project exit scammed last week after completing a $2mln ICO.  And this is just a single of such behavior.  Those of us who were around for the Confido exit scam remember when the take-the-ICO-funds-and-run model started to become the life-changing boon of many a market fraudster.

At its core, this movement is in the interest of your average internet user who could fall prey to scammy behavior and unscrupulous business practices. Or perhaps that’s what the sweeping bans are on the surface.

#Facebook, #Google, #Twitter banning #crypto ads! Mostly affecting #ICOs. Should be good to clear the clutter. What do you think? #cryptocurrency #altcoin pic.twitter.com/D00QWm6wgS

Certainly, it can be difficult to differentiate between legitimate and inauthentic projects in a space as nascent and unregulated as crypto, just look at how much money Giza was able to raise before they took off running–what distinguishes foul from fair is not so cut and dry.

But this cryptocurrency ad ban punishes actual projects alongside fraudulent ones.  There are feasibly more legitimate than illegitimate actors in the cryptosphere, at least in the realms of ICOs and wallet providers, and yet, consumer protections are put in place at the expense of these legit projects.

And for industry titans like Google, perhaps the binary of “have or have not” doesn’t need to exist.  One might think that Google has the resources to sift through the trash to find the treasure, and if past is predicate and more than mere prologue, this assumption could be on to something.

According to a CNBC article, “Google said it took down more than 3.2 billion ads in 2017 that violated its policies, which is nearly double the 1.7 billion it removed the year before.”  Whose to say that these ads weren’t filtered individually? It’s unlikely, in any case, that they were banned on a per industry basis, and it conveys that Google has some tools at its disposal to measure the quality, worth, and authenticity of an advertisment’s contents.

Question remains, they’ve done it before, why not now?

The Future of Crypto Ad Exposure

Last year, Google and Facebook raked in 73% of digital advertising revenue in the United States.  Some figures even estimate that the duo attract 25% of all global ad spending.  For Alphabet Inc., Google’s parent company, that’s “roughly 84 percent of its total revenue,” according to CNBC.

They’ve been called an advertising duopoly for good reason.  And even as Snapchat, Amazon, and others chip away at this dominance, the two still attract enough ad exposure to corner 50% of the entire market.  With this control, they run the market, and dictate what content a vast majority of the internet’s users will be exposed to.

Conspirators would argue that the cryptocurrency ad ban is big tech’s attempt to quash the cryptocurrency craze, an oppressive response to a new technology that threatens the industry’s titans.  A report by Bloomberg suggests that Google is actually looking to adopt some blockchain-related, distributed ledger technology for its cloud business, showing that they’re not above embracing the technology.

Still, a blanket ban on anything crypto-related doesn’t do justice to the legitimate projects in the space.  Google and Facebook serve up ad content to the majority of the United State’s internet populace, so its only natural that they’d want to avoid serving up rotten apples to their users.  But the power of choice to ban should not preclude discretion, as there are plenty of startups and projects that are responsibly leveraging the same blockchain technology that Google itself is researching.

Facebook has shown that it may make a commitment to choice with discretion when they’ve examined the problem further.  In a quote to Mashable, a Facebook spokesperson stated that the site’s new “policy is intentionally broad while we work to better detect deceptive and misleading advertising practices.”  Hopefully, the team will learn to separate truth from fiction so that true projects can receive fair exposure, and if they do, perhaps it’ll lead Google to do the same–as they’ve done before.

The post Cryptocurrency Ad Ban: Big Tech’s All or Nothing War with Crypto appeared first on CoinCentral.