The volatile cryptocurrency market has taken a massive downturn in recent hours. The majority of digital coins have fallen sharply. Though the bleeding of prices is nothing new in this market, this is the largest sell-off after the massive depression in early February.

The total market capitalization has taken a massive hit as in a mere 24 hours, going down from $372 billion to as low as $309 billion, according to coinmarketcap.com. Though after a short recovery the market cap went up to $317 billion, it is still less than Bitcoin’s apex market cap of $335 billion, which was achieved in mid-December.

More Sell-Off on the Way?

Bitcoin has endured a huge blow in this crash as the coin was already in recovery mode after the last sell-off. Bitcoin shed more than 13% in the recent 24-hour turmoil and was trading below $7,800 at one point.

Bitcoin is not the sole depreciating coin, as major coins like Ethereum and Ripple followed the same trajectory. The smart contract leader Ethereum for the second time went below $600, after achieving its apex value of above $1,400 in January this year. Ripple also joined the party and went down from $0.78 to $0.64 in the 24-hour span. 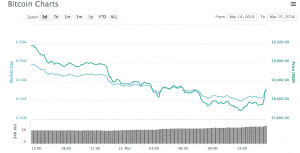 Moreover, altcoins like Cardano, Vechain, IOTA, XEM, Lisk, NEO Gas and Icon went down by more than 20% in that period.

However, some signs of optimism can be seen among traders, with an increase in trading volume and some price recovery in the last hour.

The recent sell-off was the result of a few factors rather than a single one. The announcement by Google, the world’s largest digital advertising platform, that it will put a ban on all cryptocurrency related ads, including initial coin offerings, trading advice, and even crypto wallets, turned out to be the major one.

The collapsed cryptocurrency exchange Mt. Gox is another player responsible for the dipping market. As the news of the massive sell-off by the trustee of the doomed exchange surfaced around a week ago, it created a stir in the market. Though till now, the direct role of Nobuaki Kobayashi, the bankruptcy trustee for Mt. Gox, is not known, he could be a huge factor as the person still holds a staggering number of coins. For disclosure, Mr. Kobayashi was responsible for driving the Bitcoin price below $6,000 with his massive panic sell-off.

Regulatory uncertainty is also playing its role in creating doubt in the market. Recently, amid the $500 million Coincheck hack, the Japanese watchdog decided to tighten the noose on cryptocurrency exchanges operating in the country. Recently, it penalized six exchanges while ordering Coincheck to make further improvements.

Moreover, banks are also putting more and more pressure on the market by barring their customers from purchasing cryptocurrencies using their plastic cards. For example, the second-largest private lender in India, HDFC bank, banned its customers from using the bank-issued credit and debit cards for cryptocurrency purchases, according to an announcement made by the bank to its customers a couple of days ago.

CNBC quoted Thomas Glucksmann, head of APAC business development at cryptocurrency exchange Gatecoin: “The sell-off was triggered by a number of factors, notably, weariness over increased regulatory scrutiny of ICOs, the Mt.Gox bitcoin dump and what seems to be some heavily liquid traders pushing for future buy-back opportunities.”

“These bear signals have subsequently spooked many new crypto investors who are now looking to cut their losses,” he added.

Matthew Newton, analyst at eToro, commented: “The impact of Google’s ad ban is clearly being felt in the market but prices were stagnating before the announcement. Cryptocurrencies have taken a series of hard knocks over the last few weeks, from the SEC’s ruling on crypto exchanges to reports of a bear whale with the Mt Gox case. The resulting lack of buying opportunities has left even the more seasoned investors with a sense of frustration.”

He added: “But just as we’ve come to expect sharp rises from this market, so too should we expect big falls. Fluctuations are an inevitable part of the cycle and investors should not forget the price of BTC is only back to where it was a couple of months ago. The markets have come back from bigger setbacks before, and we remain confident in the long-term outlook.”