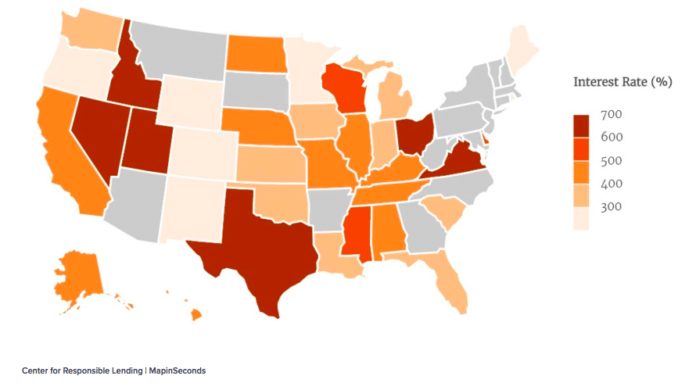 This year, about 12 million Americans will get sucked into the black hole that is the short-term loan industry. Short-term, small-dollar loans, better known as payday loans, have ballooned into a $90 billion market with no signs of slowing down. With a payday loan, you typically borrow between $300 to $5,000 and pay it off anywhere from a couple of weeks to a year later. However, there’s one catch.

Payday loans have an average annual percentage rate (APR) of almost 400 percent. At this rate, a 12-month, $1,000 advance would end up costing $4,130.85 to pay off completely. To put this number into perspective, the average credit card APR is right around 17 percent.

Due to the astronomical interest rate of payday loans, those who take them out often need to take out multiple loans over time, digging themselves deeper into debt with no feasible way out. Before we get into how cryptocurrency like Bitcoin can help, though, it’s essential that we dissect the root of the issue.

Why Are Payday Loans So Popular?

With interest rates in the triple digits, why would anyone even consider taking out a payday loan? Let’s use a little bit of imagination to see why.

Imagine you’re a lower to middle-class thirty-year-old with a spouse and two kids. You’ve got a steady job, but with family expenses, you’re living almost paycheck-to-paycheck. One day on the way to work, your car breaks down. You take it to the mechanic only to find out that it’s going to cost $1,000 to repair it. Unfortunately, your next payday is still ten days away.

At this point, you’ve got a few options:

When facing those options, the choice is obvious. Often, the people taking out these loans have no other feasible possibilities, so predatory loaners are able to jack up the interest rates without repercussions.

The Real Issue at Hand

It’s easy to chastise payday loan companies for their predatory practices. And, there are regulations in development (sort of) that could help keep them in check. However, there’s a broader issue.

The bi-weekly paycheck is a driving force behind the success of payday loans. Back to our hypothetical:

What if, instead of receiving a lump sum check ten days from now, you could receive one-tenth of that amount each day over the same period? You would probably be more comfortable forgoing the loan to pay off the car repair knowing that you would have an influx of cash the next day. With 80 percent of payday loans being taken out within two weeks of the previous one, it’s a sandpit you want to avoid at all costs.

Without giving a detailed history lesson, biweekly paychecks became popular in the 1930s. At that time, calculating taxes was a manual process. Batching paychecks over some time, rather than distributing them each day, made an accountant’s job easier. Eventually, we settled on a two-week timeframe.

Nowadays, electronic filing and payments have decreased the complexity of tax accounting and payroll. However, we still have one, or actually, several forces causing a continued bi-weekly paycheck trend. If you’ve been around cryptocurrency for any amount of time, you can probably guess what these barriers are: middlemen.

The Long and Winding Road

There’s no shortage of payment intermediaries. You’ve got issuing banks, credit card companies, acquiring banks and payroll processors to name a few. Ignoring the fees that each entity charges along the way, there’s a time delay associated with each one as well.

The obvious case of intermediary bloat is in the Automated Clearing House (ACH) system that employers use to pay employees. Or in other words, direct deposit. The ACH system implements antiquated transaction deadlines that lead to one- to two-day processing delays if a business, or one of the intermediaries, misses them.

One or two days may seem negligible, but the total quickly bubbles up when multiple parties miss a deadline. Because banks collect interest on these frozen funds, they don’t have much of an incentive to improve this process. The second, and a less well-known, barrier to daily paychecks is the payment process from customer to business. A typical credit card transaction passes through at least three intermediaries for approval, causing a company only to receive money from the transaction days later. This delay often leads to cash flow issues meaning that the business couldn’t pay employees right away even if the ACH system allowed them too.

How Can Cryptocurrency Help?

The advantage of injecting cryptocurrency into business payments and payroll is two-fold. On the payments side, businesses that accept cryptocurrency reduce any cash flow issues they may have. Instead of waiting for transaction approval from issuing banks and other intermediaries, the money hits their wallet after a few quick blockchain confirmations. This reduction in approval time opens up cash flow enabling businesses to pay employees more frequently.

Additionally, cryptocurrency paychecks aren’t bound by the limitations of the traditional ACH system. You could get your paycheck to your wallet daily, over the weekend, or even every hour if you wanted to. Combine this freedom with the functionality of a smart contract and your payment options are nearly limitless.

You probably know few (if any) people being paid in cryptocurrency, which exemplifies the current gap in solutions. Some could argue that a third-party solution isn’t necessary; employers should just transfer paychecks to employees’ wallets directly. However, doing so creates a headache for auditing and tax purposes.

Bitwage is probably the most well-known cryptocurrency payroll product. It includes time tracking software, invoicing and payroll customization on top of regular payments.

Another solution in the works is Request Network. Request is a platform for payment requests (get it?) with a focus on easy auditing and documentation for tax purposes. Unlike Bitwage, Request is a protocol-level product that you can use to build your own payroll solution.

Cryptocurrency payments and payroll provide convenience for most and are a near-necessity for the 12 million Americans trapped by predatory loans. As regulation continues to stall, cryptocurrency adoption may be the only way out for these individuals. Even with the current volatility of the market, the advantages of cryptocurrency paychecks are clear.

It’s only a matter of time before we start looking forward to our daily pay-times rather than the all too sparse bi-weekly paydays.