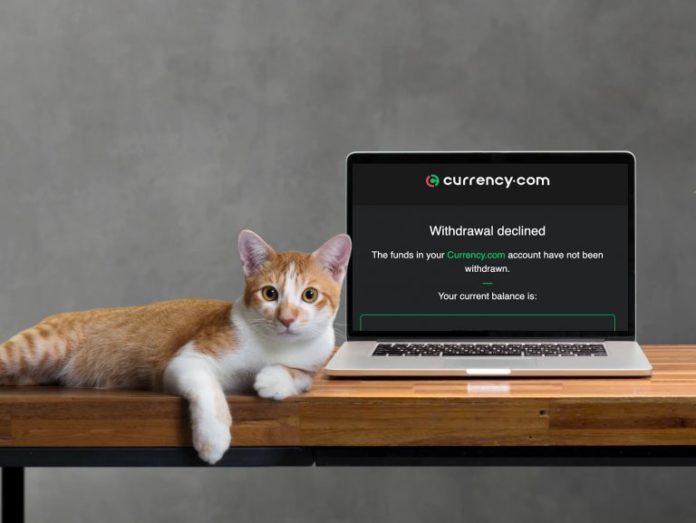 Know Your Customer (KYC) and Know Your Transaction (KYT) are ostensibly deployed by exchanges to combat money laundering. In practice, these provisions are used as an excuse to surveil, cajole, and threaten customers, who risk losing funds if they are unable to meet the impossibly high burden of proof. An investigation by news.Bitcoin.com suggests that tokenized securities exchange Currency.com is complicit in such behavior.

“My funds are stuck on Currency.com. They say I need to prove origin of funds and are refusing to release them. Can u investigate?” So read the anguished Telegram message I received from a cryptocurrency trader last month. News.Bitcoin.com does not have a mandate to investigate hard luck stories; we are a news organization, after all, not customer support. However, I had a connection of sorts with Currency.com, having previewed the crypto-powered stock exchange in January last year and interviewed its CEO Ivan Gowan.

Knowing that KYC/KYT abuses are on the rise, and already possessing a Currency.com account, I decided to try and replicate the trader’s fate. What I found raises serious questions about the integrity of Currency.com and the entire ‘surveillance exchange’ industry upon which KYC is founded. Unable to meet the unreasonable demands arbitrarily thrust upon them, traders are being locked out of exchanges that have unblinkingly accepted their funds only to refuse to return them. Know Your Transaction is the KYC of blockchain, a policy which places the onus on customers to prove their funds are clean. This is of course an impossibility, any more than a shopper can prove the cleanliness of the dollar bills in their wallet. As the February 17 Marty’s Bent newsletter noted, “in a world in which KYC/AML compliance is forced on everyone, individuals are presumed guilty until proven innocent.” As the following experience with Currency.com shows, surveillance exchanges will stop at nothing to seize their customers’ funds.

Following up on my Telegram contact’s tip-off, I deposited funds onto Currency.com on February 4. I wanted the sum to be high enough to trigger their compliance checks, but without losing all my crypto if the allegations proved true. In the event, I got my funds back – but not after more than a dozen withdrawal attempts, 20 customer support messages, and the submission of extremely personal information. After depositing $1,500 of BCH onto Currency.com, I made a couple of trades just like a regular trader would. My account was in full working order, having completed KYC in January 2019, and while using the platform I received no alerts to the effect that my account wasn’t in order. Then, on February 13, I made a withdrawal request in BTC for my full balance, which remained around $1,500. A few minutes later, I received the following email message: No explanation – just a straight out denial of funds. I’ve used cryptocurrency exchanges – including some extremely dubious trading venues – for eight years, and have never been denied funds with no explanation. I tried withdrawing to a different BTC address, in case Currency.com couldn’t handle bech32, but again received the same message. With no clue as to what could be wrong, I opened a customer support ticket, and that’s when things got really weird. According to Currency.com staffer M, “Your proof of funds has expired.”

What Is Proof of Funds?

“In order for your trading account to operate properly in future, we kindly ask you to provide us with the documents that confirm the origin of funds you used for transaction conduction within your account on Currency.com.

As a confirmation of the origin of the funds you can provide:

– documents confirming the sale of real estate and crediting the proceeds to the account;

– a document confirming the fact of purchase of shares, bonds, securities;

– the contract under which money was received for the performance of certain services;

– lease agreement (for receiving the rent);

– the contract under which the debt is returned;

I don’t know about you, but I’ve never purchased cryptocurrency using my inheritance. Noting that the message had requested proof of funds for my “trading account to operate properly in future,” I thought I may have spotted a loophole. “You didn’t have any trouble accepting my funds two weeks ago without asking any awkward questions,” I responded. “So I’m sure you won’t have any trouble releasing them. Kindly do so immediately. I’ll be able to provide additional documents in future should I have cause to use Currency.com again.”

Currency.com were not to be bowed, however, even when I pointed out to M that it was she who had set up my interview with the company’s CEO a year ago. Even though my funds had been lawfully obtained, I had no way of proving as such – no one does – so to show Know Your Transaction for the farce that it is, I submitted a bank statement displaying a transaction that looked like it might pass as a cryptocurrency purchase. My “proof” was accepted without question, but still my funds remained locked up. Currency.com were clinging onto that $1,500 for dear life. While I awaited the release of funds, I submitted a series of questions to Currency.com for a proposed news.Bitcoin.com article on the matter. Upon quizzing them on their KYC/KYT policy, I was told: “We reserve the right to verify your compliance … at any time within your use of the service, in particular by the following means: (a) requesting a documentary confirmation of the source of origin of funds, the title of property to them as well as the rights to external accounts.”

I asked: “How are customers meant to prove the source of their funds using, as per the suggested list, “documents for inheritance, documents confirming the sale of real estate and crediting the proceeds to the account” etc, when in many cases it is impossible to prove the source of cryptocurrency, especially when it has been earned or gifted?” Currency.com replied:

My trade history on other platforms is none of Currency.com’s business, and even if provided would prove nothing about how I originally obtained my funds. Currency.com also sent me a wall of text from their terms and conditions that boils down to “if our onchain analysis software flags any of your transactions as suspicious, we can hold onto your funds and there is nothing you can do about it.” For the record, the deposit I made into the exchange did not come from a mixer, and the withdrawal was into a new bitcoin address with no transactional history.

At this stage in proceedings, Currency.com performed a sudden volte-face and issued the following proclamation:

All this time they were locking me out for not providing proof of funds, and it turns out it was proof of address they needed all along. It’s a simple mistake that anyone could make, and then drive home over the course of half a dozen messages.

Proof of Address Is Not Enough

I had provided proof of address 13 months earlier upon signing up for Currency.com. As anyone who has used a centralized service, be it a bank or an exchange, knows, it is not a requirement to prove one’s address on an annual basis. Nevertheless, Currency.com were determined, and I was determined to see how many hoops I would have to jump through to appease them. I submitted the following document, with my bank details and address clearly shown, and only my account balance blacked out because my net worth is no one’s goddamn business. I was wrong.

“Unfortunately, this document is not suitable, because on the previous screenshot you’ve used some graphics editing,” I was informed. “We kindly ask you to provide us with a different document without using graphics and photo editors.” This request made me uneasy. I had no desire to disclose my bank balance to a Belarusian customer service operative, who already had all my personal documents, which could hypothetically be acquired by Eastern European identity thieves.

Mildly frustrated at this juncture, I replied: “You’re quite right. The document has been blatantly edited to conceal my account balance: it’s common practice for people to do so when submitting verification documents, because it avoids the need to broadcast their net worth to the world, preventing them from becoming a target. However, in the interests of full transparency and getting my funds back, here is the same statement with balance intact,” adding:

If there’s anything else you’d like to know – mother’s maiden name; account passwords; balance of all bitcoin wallets; seed phrases – please let me know and I’ll do my utmost to comply.

And at that, my funds were finally released. While there is nothing to suggest that Currency.com were seeking to steal them, or those of the trader who suffered the same fate, the experience was unsettling. “These [KYC] laws are in place to control the little man,” ranted Marty in his Feb 17 newsletter. “Forced to send their most intimate data to insecure databases that are highly prone to being hacked. We’re talking date of birth, home address, social security numbers, bank account information, pictures of passports and driver’s licenses. All sent to be hacked and sold on the Dark Net to people looking to commit identity fraud. Or worse, find someone they want to harm.”

Marty signs off with a warning shot to the Currency.coms and their blockchain analysis cronies: “Those who build companies to de-anonymize bitcoiners to appease a corrupt, overarching and dying system should be publicly shamed. They are middlemen out to make a profit, they are enemies of freedom in the Digital Age, and they are most certainly enemies of Bitcoin.”

Do you think some exchanges enforce excessive KYC? If so, why? Let us know in the comments section below.

Binance Futures has doubled its weekly trading volumes since the start of the year, according to a recent report published...