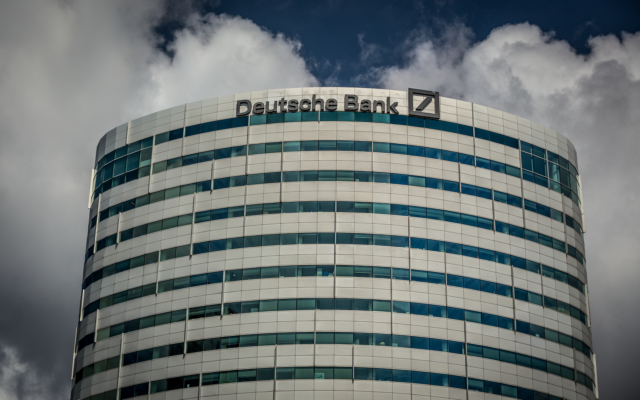 A bond issued by the problem-ridden Deutsche Bank has been tokenized on the EOS network. The creation of tokenized assets is nothing new, but this time, the decision raised eyebrows.

EOS, a much-touted project, is still seen as dubious, hosting significant bot activity in its distributed app market. Possibly, the high level of transactions on the EOS network is also simulated. Hence the sharp Twitter reaction to the tokenized Deutsche Bank bond.

A Deutsche Bank bond has been tokenized on EOS mainnet.

Seeing as both the bank and EOS are down 90% from their all-time highs, I guess they figured there’s nothing left to lose.

Tokenizing an asset may be trivial, and does not require any special permission. The token itself works as a derivative, and does not promise ownership of the asset. In the past, multiple networks offered free-for-all tokenization, going as far as tokenizing Bitcoin (BTC) itself.

But the Deutsche Bank bond used another approach, this time holding the actual bond with a depositary. The bond, tokenized by the dBonds team, will be held with Queen Street Finance, a UK-based custodian.

The creation of tokenized securities has been relatively slow in 2019, despite expectations that blockchain would bring traditional assets to a more democratic group of buyers. However, tokenized securities are not widely available yet and there’s still not a great deal of access to the market for unaccredited investors.

The other problem with the DUSD token is that only EOS-based accounts can reach the asset. Then, there is the actual task of trading the token, or transferring it back to bonds when the owner wants to sell. There is still no open market for tokenized securities, and only fiat-backed stablecoins are freely available. Tokenized commodities like gold and metals however, have a wider buyer base, as some of the coins are listed through crypto exchanges.

EOS remains one of the important networks, though recently the price fell again to $2.96, extending its long slide. EOS is down 5% in the past day as the markets plunges back into the red. The total market cap of EOS has fallen to $2.77 billion, below the reported $4 billion raised in the EOS token sale. The project garners additional criticism from the fact that most of its 21 nodes are situated in China, making the network riskier due to clustering in one country.

What do you think about the tokenized Deutsche Bank bond? Share your thoughts in the comments section below!