Last week, we brought readers of Global Coin Report to the attention of DigiByte (DGB), where we noted, “DGB appears to have potentially found its footing, at least in the short-term and in the process, is feeling some much-welcomed love in the form of price appreciation.

Although it’s premature to declare that either DGB or the vast landscape of cryptocurrencies are completely out of the woods just yet, nevertheless, the recent day’s action in DGB may be foreshadowing what’s to come for the entire space in the weeks ahead with DigiByte setting the tone.”

We also went on to state, “from a short-term perspective, while DGB requires additional work, it has recaptured the .023 level, which acted as potential short-term support (now turned resistance) on the way down, which is a positive development.

In addition, if DGB can hodl the .023 figure in the days ahead and or better yet, put in some side-ways grind and consolidate the recent move into higher ground via forming a potential right shoulder of an inverted Head-and-Shoulders (H&S) formation, we may have the making’s of something to look forward to in the weeks ahead, should such development indeed materialize”, which now appears to be playing-out in Spades as we can witness from the daily Chart below: 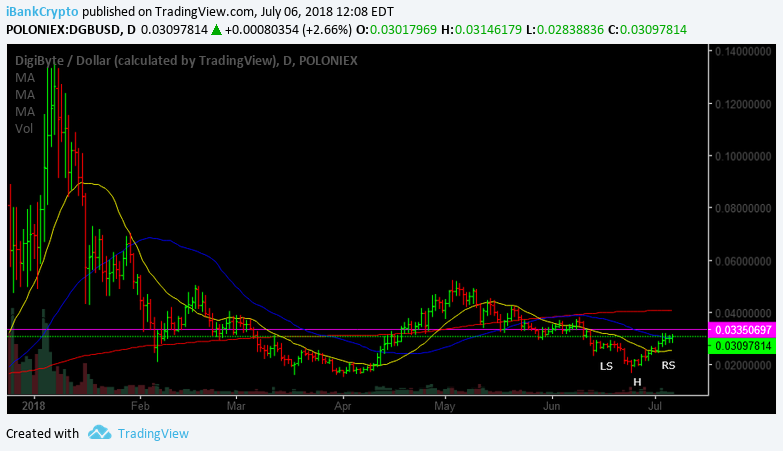 When viewing the recent action of DGB above, things are working as we suspected last week with DigiByte consolidating the recent move higher via some side-ways grind and now finds itself trading comfortably above its 20 SMA (yellow line) and flirting with its 50 SMA (blue line), which continues to suggest a favorable technical posture from a short-term perspective.

While additional work remains in order for DGB to reach our referenced short-term price objective at .04 (60% move from initiation) derived from the measured move, it certainly appears that we’re on the right path and things are playing out in spades – so long as DGB is capable of exhibiting its recent relative strength.

Thus, moving forward, both investors/traders may want to utilize the following levels as a guide as well as providing further evidence/clues with respect to direction.

If, at any time in the days ahead, DGB is capable of clearing the .034 level, such development, should it materialize, would likely set the stage for a run for the roses at our referenced .04 price objective, which just so happens to coincide with the 200 SMA, resulting in a 60% move in the past week.

With respect to the potential short-term support, both investors/traders may want to utilize the .025 level from a trading point of view, while the .02-.021 should provide for longer-term investor support.

Nevertheless, the action in DGB continues to follow our script from last week to a ‘T’ and now we just wait to register the points on the scoreboard should DGB find itself touching down at the .04 level in the days/weeks ahead.

Best Time to Buy TRON (TRX) – Here is Why

TRON (TRX) has been one of the cryptos that the entire Internet has been talking about for months now. Still,...