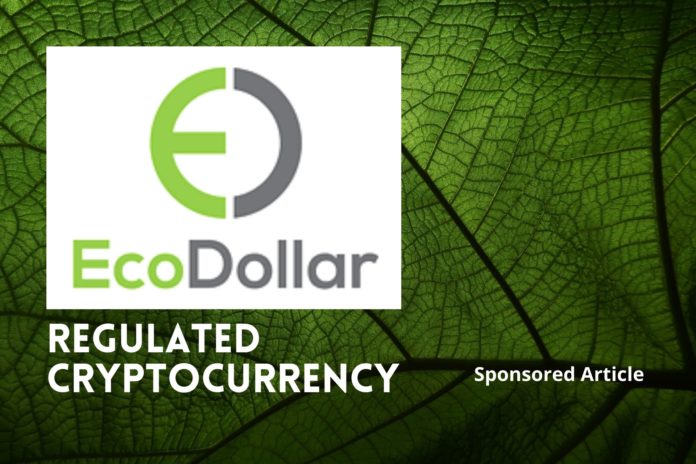 The traditional banking and financial systems have failed us time-and-again still offering rudimentary solutions despite a massive breakthrough in internet technology over the last two decades.

As a result, decentralized cryptocurrencies free from government and regulatory intervention are seeing a lot of demand. Over the last decade since the inception of Crypto Currencies, cryptocurrencies have played a vital role and managed to penetrate the mainstream financial markets to a great extent.

But the thing with cryptocurrencies like Bitcoin is that their algorithm works on the Proof-of-Work (PoW) consensus model that requires miners to compete against each other to unlock new blocks in the blockchain network. Hence they consume a lot of electricity ultimately impacting the environment.

EcoDollar – Solving the Existing Anomalies With A Greener Cryptocurrency

Solving the existing anomalies of the crypto industry, EcoDollar is one such revolutionary blockchain-based decentralized digital currency free from the intervention of any political entity or central government.

With the Proof-of-Stake (PoS) consensus model, EcoDollar works on the “staking” model wherein the servers validate all the transactions just by staking the EcoDollar cryptocurrency from their respective wallets. The “staking” model doesn’t require the use of high-end hardware.

The primary objective behind creating the EcoDollar platform is its Greener Planet Initiative that aims to protect the environment and acquire more green land across the globe.

The EcoDollar blockchain and its cryptocurrency are completely supported and backed by the value of this biodiverse land properties acquired and maintained worldwide.

The developers say that 75% of the proceeds of the initial supply of 100,000 million EcoDollar cryptocurrencies will go towards its Greener Planet Reserve initiative.

Under this initiative, the platform aims to promote and adopt environmental programs and policies by funding environmental organizations worldwide in EcoDollars.

Besides, the platform also plans to use its funds in educating schools for teaching economic sustainable development by balancing economic growth, environmental care and social well-being.

Part of the EcoDollar strategy is to work with Ecological Entities to provide a precise method for valuing green properties that will help conserve nature.

Under its Greener Planet Reserve, EcoDollar’s objective is to have a natural reserve comprising of millions of square meters of Bio-Diverse land distributed worldwide. The objective is to expand its land acquisition and protect it further promoting the preservation of flora, fauna, and other endangered ecosystems.

The EcoDollar blockchain runs on servers distributed all across the world ensuring better decentralization and additional security to the platform. Besides, the EcoDollar ecosystem is designed in a way that it complies with the strict regulations of international organizations regulating digital currencies and other virtual digital assets.

The EcoDollar.org operates through different global locations by having respective licenses for operations according to the legislation of each country.

By following the guidelines of international organizations to regulate digital currencies, EcoDollar provides a very safe infrastructure to operate. Now, EcoDollar is expanding its borders across different crypto-friendly countries.

EcoDollar has assured its operational convenience by creating its framework wherein headquarters can be incorporated and dissolved as per the changes in the legislation in each country.

EcoDollar is a one-of-its-kind cryptocurrency that promotes sustainable economic growth along with its green expansion initiative for the future. It incorporates features of the latest cryptocurrency developments offering the benefits of decentralization.

EcoDollar is a one-of-its-kind cryptocurrency that promotes sustainable economic growth along with its green expansion initiative for the future. It incorporates features of the latest cryptocurrency developments offering the benefits of decentralization and at the same time following the right regulatory framework.

The wonderful world of casino, eh? Over the years it has proved itself more than capable of commanding a huge...