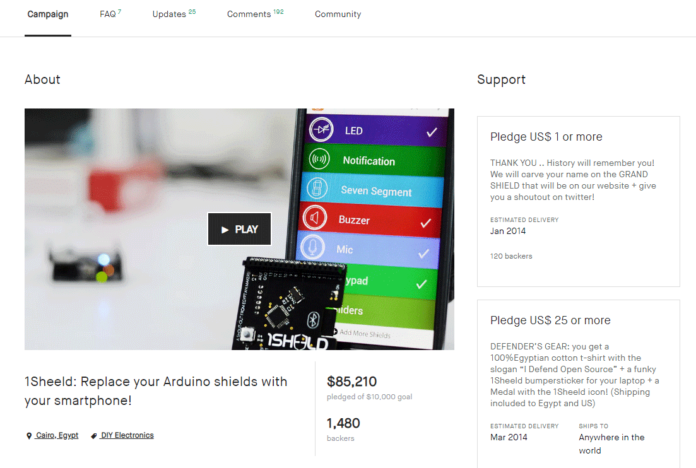 The Elkrem project is bringing together the worlds of IoT devices and cryptocurrencies. These two emerging technologies hold the potential to create a future we might not have dreamed of. IoT stands for the Internet of Things. It proposes the idea that everyday objects like fridges, televisions, and cars (to name a few) are connected to the internet and can communicate smartly with each other.

But this is the material layer, the stuff we can get our hands on. Cryptocurrency is a virtual movement with concepts and solutions we need to wrap our heads around. Where the two merge just might be the sweet spot if we intend to take humanity to the next level of evolution.

After experimenting for hours on their own small projects, founders Amr Saleh and Islam Mustafa set out to empower other hobbyists by building easy-to-use electronics solutions. In 2013, they successfully launched their very first Kickstarter campaign by bringing a new innovative solution into the world of custom electronics.

Amr and Islam aptly named their project 1Sheeld. It’s a solution which allows users to connect a smartphone to their Arduino board instead of having to buy several separate boards known as shields. Since most people are prepared to invest in a decent smartphone, this solution leverages the power we already have in our pockets.

(Side note: Arduino is an open-source platform that allows users to easily connect hardware and software together for various real-world applications. Open access to both the hardware and software is core to its philosophy and has made it an incredibly popular choice for enthusiasts all around the world.)

Needless to say, the campaign was successful as backers pledged over eight times the team’s initial goal of $10,000. $85,000 later, and plenty of online orders that followed, the crowdfunding campaign boosted their reputation and ability to raise capital for future projects.

Now the team is looking for a new challenge. And what could be more challenging and possibly more rewarding than building for blockchain? Their latest conception is Elkrem, a project which develops hardware and software tools specifically geared towards blockchain and other decentralized applications. Ultimately, they hope to reduce the learning curve for engineers and hobbyists when building prototypes. Elkrem has already grown into a nine-employee strong team based out of Cairo, Egypt.

There is no shortage of projects building software development kits (SDKs) in the cryptocurrency field. SDKs in blockchain allow other developers to quickly build decentralized applications on top of a usually more complicated system. So it’s particularly refreshing when a hardware development kit (HDK) comes along to create opportunities where the real world meets the virtual one.

The team is currently working on a blockchain hardware development board. At launch, it will support several protocols including Ethereum, Bitcoin, Whisper, Swarm, Status.im, and IPFS. According to their website, the board will be launching soon on Kickstarter. Given their previous experience and success on the crowdfunding platform, they should once again have no problem meeting their fundraising goal.

Getting Your Hands Dirty

At the Ethereum Denver hackathon held earlier this year (2018), the Elkrem team took first place after putting together a simple cryptocurrency-enabled IoT device:

This particular project uses both Ethereum smart contracts and the Status project’s whisper protocol to power a light bulb. To be clear, this isn’t rocket science, but we are only in the early stages of this interesting tech. Nevertheless, this may have enormous benefits in areas such as healthcare and the smart cities of the future.

Independent blockchain smartphones are already hitting the market with similar ideas. Companies are eager to capitalize on decentralizing other areas of our lives, such as hardware. This will certainly be good news in the face of dominant players like Apple who want to maintain control over the market.

Elkrem has already launched their own Bitcoin-enabled software kit called Koyn. It’s still in the early stages of development, however, this Arduino interface will make it a lot easier for developers to connect to the Bitcoin blockchain of the future. A quick peek into the side projects of the Elkrem team members reveal a number of interesting ideas. How about a Bitcoin-powered electrical outlet for savvy renewable energy producers? Or maybe a cryptocurrency payment vending machine?

The future is coming. And coming fast! Projects like Elkrem are laying the groundwork for engineers and entrepreneurs to work smartly. Cryptocurrency-enabled devices will pave the way forward in a blockchain for dummies kind of fashion. The next generation of blockchain entrepreneurs won’t want to spend all their time programming. Instead, with the right tools, they’ll want to focus their efforts on solving customer problems and building their businesses.

It should, however, be said that applications will probably be limited to where they make the most sense. Switching on a light bulb with cryptocurrency is an unnecessary extra step when creating efficient systems. What matters most is using this technology in a smart way when exchanging value. Blockchain is all about maintaining a decentralized record of transactions, not just automating our lives. We don’t need to put everything on a blockchain.

Regardless, the exciting possibilities of the future remain. As more areas of our lives become decentralized, expect more cryptocurrency-enabled hardware solutions to appear. The future, after all, may not be coming. It may, in fact, already be here!

The French government is reportedly planning to provide a legal framework for all “digital assets” providers, local news agency LesEcho.fr...