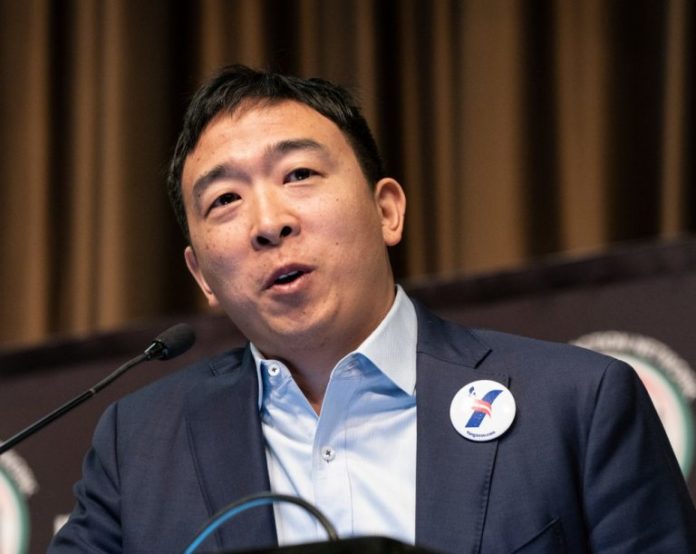 There’s much talk about multi-billionaire innovator Elon Musk’s newly announced support for Democratic presidential candidate Andrew Yang. Yang, known as the Bitcoin-friendly choice for 2020, has a reputation for innovation with his unique stance on Universal Basic Income, emphatic blockchain talking points, and acceptance of crypto donations. But it remains to be seen if the leader of the “Yang Gang” will be a proponent of Bitcoin in the fullest sense of the word, or which of his fellow candidates might do it better.

Interestingly, Yang is not the only candidate that is at least a little interested in crypto. Fellow Democratic candidate Eric Swalwell’s campaign (Swalwell has since bowed out of the race) announced in May that it would accept donations in BTC, BCH, BSV, ETH, XLM, and stablecoin WSD. The first ever presidential candidate to accept Bitcoin donations was Rand Paul, back in 2015. Yang’s opponent for the Democratic nomination, Tulsi Gabbard, also appears to be invested, quite literally, listed on an official Financial Disclosure Report as having purchased Ethereum and Litecoin in 2017.

With Elon Musk’s recent tweet of support for the Yang gang and his Universal Basic Income (UBI) proposal, and many news outlets reporting that Musk is now supporting a pro-Bitcoin candidate, it makes sense to check out what he actually says. Yang states in a January interview with the Being Libertarian podcast:

I think there should be a national cryptocurrency. You could even put this social credit stuff on the blockchain.

The social credit system he references would potentially supplement the UBI proposal, which is to be funded by a new Value Added Tax (VAT). When pressed in the interview about the VAT raising prices, Yang maintained that prices are staying the same for most things – it’s services like healthcare where the real pinch is felt, according to the candidate. This is interesting considering the general trend of currency devaluation worldwide.

As for regulation, Yang’s current campaign policy statement maintains that “A national framework for regulating these [crypto] assets has failed to emerge, with several federal agencies claiming conflicting jurisdictions. At the same time, states have come up with a patchwork of varying regulations that make it difficult for the US cryptocurrency markets to compete with those in other jurisdictions, especially China and Europe.”

I’m a fan of the underlying technology around blockchain. It has a wealth of potential. I do think the entire cryptocurrency phenomenon has gone a bit ahead of itself … Blockchain has immense potential …It could help provide the foundation for the digital social currency that I’m very much for. Some of Yang’s positions on crypto seem favorable to regulated development in the industry. For example, Yang wants to define “what a token is, and when it is a security,” in the interest of clearing up regulatory confusion. He aims to “Clarify the tax implications of owning, selling, and trading digital assets.” For those lost in a fog of threatening IRS letters with no clear guidelines yet issued, this would likely be a welcome change.

Ignoring outright crypto antagonists like Donald Trump for the moment, though, the thing that seems to give Yang his Bitcoin-friendly image is simply that he is talking about it at all. Most are silent, save the likes of self-funded maverick anti-politician John McAfee, running as a Libertarian, and a few select others.

Sadly, for the die-hard Satoshi Nakamotos of the world, merely echoing buzzwords like “blockchain” doesn’t mean a whole lot. Even former Federal Reserve Chairman Ben Bernanke does that, as well as the president of Bitcoin-restrictive China, Xi Jinping. Many sing the praises of blockchain without digging into the real utility of crypto. And this utility is for the smallest minority there is: the individual. As Satoshi himself wrote in the Bitcoin whitepaper: “A purely peer-to-peer version of electronic cash would allow online payments to be sent directly from one party to another without going through a financial institution.” No regulation there, save math. Musk and Other Candidates’ Statements

With Yang’s positions fairly well enumerated, it stands to look at other candidates, and also Yang supporter Elon Musk (who tends to wax humorous and tongue-in-cheek when discussing crypto). Their stance on the topic might shed additional light on the Yang Gang’s bid to do something novel in 2020. Below are some short quotes and summarized positions.

Elon Musk: “I literally own zero cryptocurrency, apart from .25 BTC that a friend sent me many years ago” (February 2018). “Dogecoin might be my fav cryptocurrency” (April 2019).

Donald Trump (R): “I am not a fan of Bitcoin and other Cryptocurrencies, which are not money, and whose value is highly volatile and based on thin air…” (July 2019).

John McAfee (L): “We are creating a permissionless society” (September 2018). “Bitcoin is at the mid 10’s and people worry. LMFAO!! Why do you pay attention to weekly fluctuations? Look at the past few months FFS! It’s rising drastically. I’m still positive about my $1 mil BTC price by the end of 2020. Alt coins like MTC and Apollo will rise ten times more” (July 2019).

The above list – as paltry as it may seem – constitutes most of what is being openly spoken about crypto by current candidates. Save for McAfee, it’s mostly talk about blockchain, the “underlying technology” of cryptocurrencies, and the need for centralized regulations. While many news outlets are hyping Musk support for the pro-Bitcoin candidate, a more apt moniker may be the “pro-blockchain” candidate, whatever that may mean.

What are your thoughts about Andrew Yang’s position on Bitcoin? Let us know in the comments section below.

Distributed ledger technology (DLT) is currently being investigated by the U.K Department for Work and Pensions (DWP) in order to...