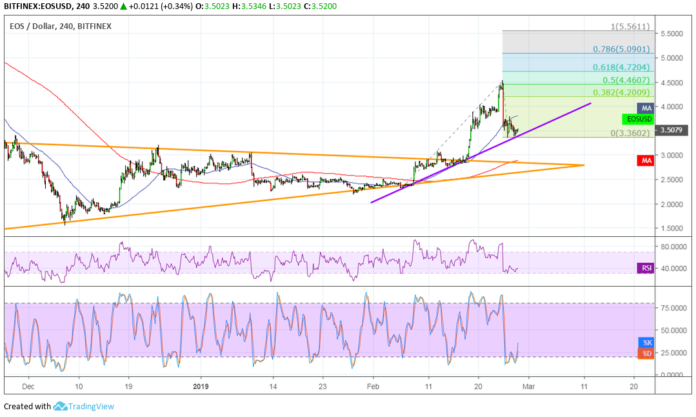 EOS recently broke to the upside of its symmetrical triangle on the 4-hour time frame to signal that an uptrend is due. Price is also moving above a short-term rising trend line that is currently being tested.

The 100 SMA is safely above the longer-term 200 SMA to indicate that the path of least resistance is to the upside. This signals that the uptrend is more likely to gain traction than to reverse. In other words, support is more likely to hold than to break, but a larger dip to the broken triangle top and 200 SMA dynamic inflection point might still be possible.

This could be enough to take EOS to the next upside targets marked by the Fibonacci extension tool. The 50% level lines up with the swing high around 4.600 and might be the first take-profit point for buyers. The 61.8% level is at 4.720 then the 78.6% level is closer to the 5.000 major psychological mark. The full extension is at 5.561.

RSI is already bottoming out without hitting the oversold region, indicating that bears might be tired and that buyers are eager to return. This could keep the uptrend going until the resistance levels and beyond. Similarly stochastic is pulling higher and moving north, so EOS price might follow suit.

News of a hack attack on EOS could keep weighing on prices as a hacker reportedly stole $7.7 million worth of coins when one of 21 EOS black maintainers was unable to make an update. EOS42 said on a Telegram group that one of its users had their EOS account compromised by a hacker on February 22.

The security procedure following this would be to have all top 21 block producers to update their blacklist. However, EOS42 shared:

:This scenario played out in the last 24hrs when a newly rotated top 21 BP failed to apply the blacklist. Unfortunately, one blacklisted account holding [2 million] EOS began to be emptied.”