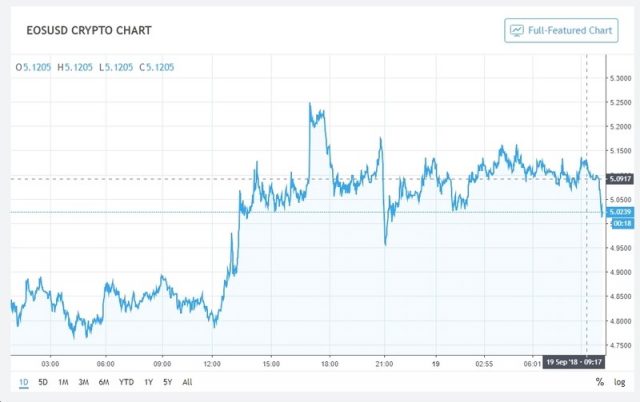 The price of EOS could be set to take a tumble after a security flaw allowed hackers to issue one billion fake tokens. Tracking the hack back to September 14, security experts found that EOS blockchain account oo1122334455 created the batch of counterfeit EOS-based tokens. Because the system allows creators to name their coins, the hackers called their fakes EOS. With the tokens ready, oo1122334455 sent them to dapphub12345 who then transferred them to iambillgates.

Using the fake EOS, iambillgates bought BLACK, IQ and ADD coins and tried to sell them on the Newdex exchange. The criminals were then able to swap there “EOS” for real EOS tokens. The sell orders were eventually stopped by Newdex, but not before 11,803 EOS losses were recorded. In total, Newdex dApp users lost around $58,000. In the wake of the hack, Newdex apologized and said that the problem has now been fixed. Additionally, the exchange will be working with EOS to find the perpetrators and retrieve any stolen funds.

Although the incident was less costly than the $7.7 million KickICO hack or Monero’s recent mining attack, the incident has exposed some fundamental flaws in the EOS ecosystem. As noted by The Next Web’s David Canellis, the vulnerability is down to two simple oversights. Firstly, anyone with an EOS can create EOS-based tokens and name them whatever they want. The obvious issue here is that fake coins can be called EOS. Additionally, Newdex doesn’t use smart contracts. Despite calling itself the first decentralized exchange on EOS, experts have shown that it doesn’t use smart contracts to verify the authenticity of the coins flowing through it.

Put simply, the vulnerabilities make it easy for anyone to create and then exchange EOS-based tokens. Despite the revelation, EOS price charts haven’t suffered. Looking at the EOS price live on September 19, the value of a single token had improved by 4.98% on the previous day. Helping to buoy the price of EOS in recent days is its fee changes. Announced on September 6, the move has made it cheaper for developers to run dApps on the network. This, in turn, is part of EOS’ assault on Ethereum and its monopoly on decentralized apps.

EOS Hit but Not Hurt by Attack

While EOS has certainly made itself a more attractive network for developers, the recent hack needs to be taken as a warning sign. Even if the EOS price in dollars hasn’t dropped as a result of the attack, those involved in the project need to take stock of what happened. If prospective EOS developers feel as though the system is too easily manipulated, they’re likely to back off in favor of a more established network like Ethereum. Fortunately, or unfortunately, as the case may be, security flaws aren’t uncommon in the crypto world. So, even though recent events might halt the bullish trend, they’re unlikely to cause a bearish swing at this stage.

Cryptocurrencies, long the stuff of libertarian day-dreams, are coming under more and more scrutiny from regulators and other government bodies....