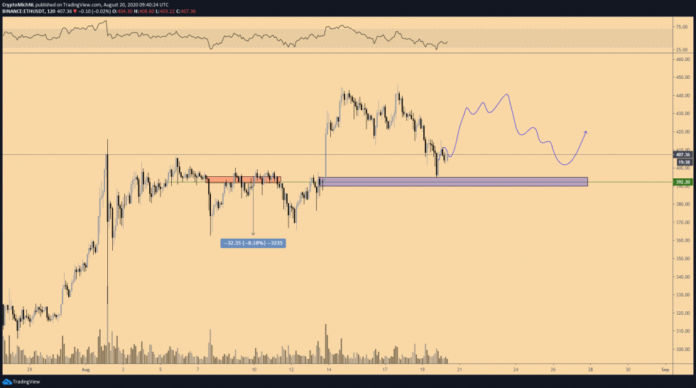 Ethereum has been facing intense bearishness throughout the past couple of days, with its recent decline even front running that seen by Bitcoin and the rest of the market.

This weakness ultimately led it to dip as low as $398, but these lows were only tapped briefly, as buyers rapidly stepped up and helped it surge up towards $420.

In the time since, the crypto has been consolidating within the lower-$400 region as its bulls and bears reach an impasse.

Analysts are pointing to the aggressive buying pressure that arose when the crypto hit $400 as a sign that upside may be imminent.

At the time of writing, Ethereum is trading up marginally at its current price of $409. This marks a notable decline from its recent highs of $445 that were set just a few days ago.

It is important to note that the visit to these highs was fleeting, as ETH’s price began facing rapidly growing selling pressure here.

Yesterday, however, the dip was aggressively bought by ETH bulls, who instantly slowed its descent and helped it see further upside.

One analyst is pointing to this as a bull-favoring sign that signals upside may be imminent.

“Still good. Support held,” he concisely stated while pointing to the chart seen below.

Analyst: ETH is Poised to Push Higher as Long as It Defends One Crucial Level

Another analyst also explained that the strong reaction to its near-term support seems to indicate that upside is imminent.

He pointed to the chart seen below, noting that he is confident that it pushes higher so long as its support around $400 continues holding and that it can break above $410.

“ETH update: Rejection off EQ. I’m confident in the trade as long as the gray box holds and does not flip into resistance.”

How Ethereum Trends as it hovers between this key support and its immediate resistance at $410 should offer greater insight into its short-term outlook.