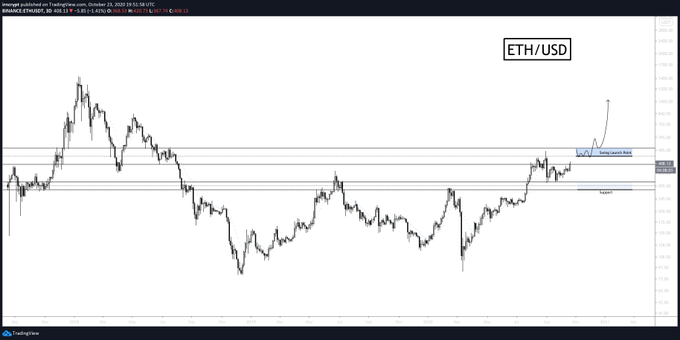 Ethereum has undergone a strong surge over recent days that has brought it from the $360 range to highs of $420. Analysts say that it will undergo a macro move higher once it manages to flip $500 into support.

Ethereum Set to Break Dramatically Higher Once It Holds $500: Analyst

The cryptocurrency is currently positioning to move higher as it holds the $390-400 region.

As reported by Bitcoinist previously, analysts say that if the coin manages to flip $420 into support, it is likely to move to $500. One crypto-asset analyst commented on the matter:

“Nice break above the $395 flat top on $ETH. ETH doesn’t always give throwbacks, so a $395 throwback is certainly possible before higher, but I wouldn’t be on it. Otherwise, this looks good for a run back near the $490 highs.”

Should ETH flip $500 into support, analysts say it will be cleared to explode higher.

The chart below was shared on October 23rd. It suggests that should Ethereum manage to flip $500 into support, it will begin a rally to four digits on a macro basis. $500 is important because it is just shy of where the market topped during August’s rally. Above $500, there is also little historical price action, indicating that the coin could enter “price discovery.”

Commenting on the significance of the chart, the trader who made the chart wrote:

“Happy playing this relatively large range until I’m ready for a full swing. I’d want to see the mid point of this pivot zone acting as support to take it.”

Ethereum is facing a setback though as reports indicate that the ETH2 upgrade may be pushed back.

In a comment first obtained by CoinDesk, Ethereum Foundation researcher Danny Ryan said that the deposit contract for the upgrade will not go live until an audit is completed:

“This library is critical to creating keys, signing messages. Critical, in early phases, [means] that if you use this library, they need to be secure; if you use it to generate your wallets, it needs to have good randomness; and if you are signing your deposits which have a signature associated, it needs to be correct,” Ryan said. “Given that how critical this library is, and given that, if there is a fundamental error in this library we could f*ck some sh*t up in terms of genesis deposits, that is the blocker.”

This audit could result in a delay until November, Ryan suggested.

Another Ethereum developer working on the upgrade said that once the deposit contract is released, there will likely be a 6-8 week gap between the release and ETH2 deployment.