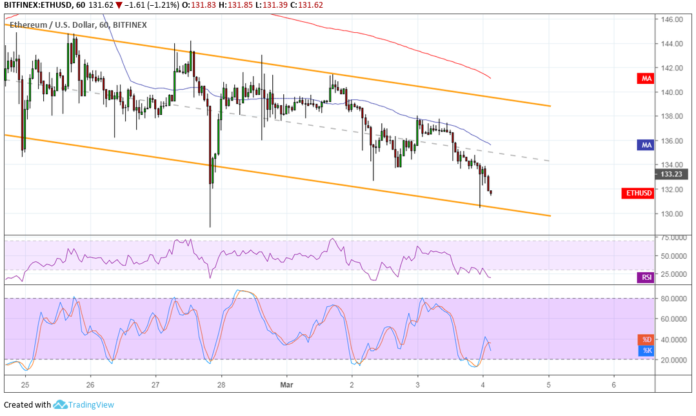 Ethereum doesn’t seem to have gotten much of a boost from the hark fork upgrade as price continues to tread lower inside a descending channel. Price is currently testing support but might be due for a bounce back to the top at $138.

The 100 SMA is below the longer-term 200 SMA, though, so the path of least resistance is to the downside. In other words, the downtrend is more likely to persist than to reverse. More so, support is more likely to break than to hold. If that happens, ethereum could be in for a steeper slide. The 100 SMA is currently holding as dynamic resistance around the mid-channel area of interest.

RSI is pointing down to confirm the presence of selling pressure but is also dipping into the oversold region to indicate exhaustion among bears. Stochastic has managed to pull up from the oversold zone but is making another downward crossover to signal its intention to move back down. A break below $130 could be enough to signal that more sellers are in control.

A few days back, system-wide upgrades to the software, called Constantinople and St. Petersburg, respectively, rolled out on the main network at block number 7,280,000. So far, there seems to be no evidence of a chain split that has previously weighed on ethereum upgrades.

Traders are looking at ethereum in a critical juncture this month as the consolidation could be followed by a strong directional move once more. A potential catalyst could be an influx of institutional investment, although the increased volumes might also put some weight on the usual amount of volatility.

Apart from that, major changes in market sentiment might also determine where cryptocurrencies are headed next as riskier holdings like these tend to benefit from risk-on situations.