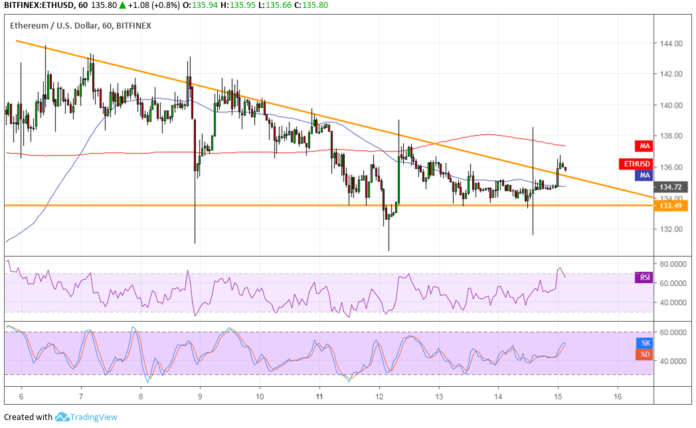 Ethereum has been consolidating inside a descending triangle for quite some time, but it seems to be breaking to the upside. Price also enjoyed a pickup in volatility over the past 24 hours but failed to establish a clear direction.

The 100 SMA is below the longer-term 200 SMA to indicate that the path of least resistance is to the downside. In other words, the selloff is more likely to gain traction from here or support is more likely to break. However, price has climbed above the 100 SMA dynamic inflection point as an early indication of bullish momentum and might be poised to test the 200 SMA next.

RSI is already in the overbought zone to show that bullish momentum is exhausted and that sellers could take over. Stochastic is still cruising on middle ground to reflect consolidation action. After all, there are still some nearby resistance levels that could keep holding, so it’s early to say if this move might be a breakout or fake out.

If it is indeed a bullish break, price could climb by the same height as the triangle formation, which spans around $133.50 to $142. Similarly a move below support could be followed by a drop of the same size.

There haven’t been much developments on the cryptocurrency front, and this is keeping traders antsy. The anticipation for the Fidelity and Bakkt platforms appear to be fading as more bulls are booking profits and short interest might be building up.

Keep in mind that volatility tends to slow around the middle of the year which could mean even more consolidation for ethereum and its peers, unless a big catalyst emerges. Any indication that institutions are starting to place more bets in the industry could revive volumes and rallies, but the lack of developments could keep the sideways action going.