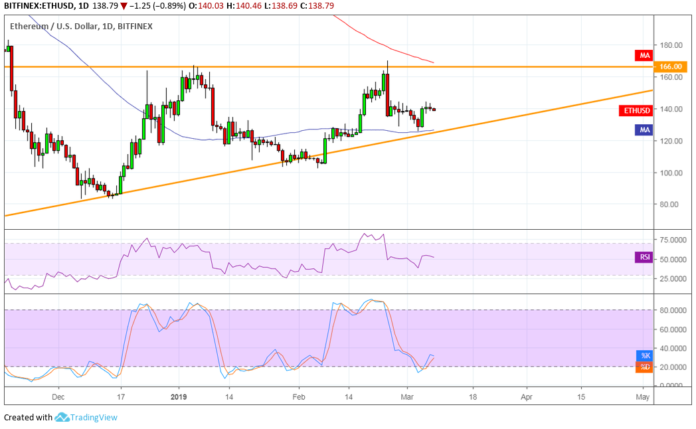 Ethereum has formed higher lows and found resistance at $166, creating an ascending triangle pattern on the daily time frame. Price is currently testing support and might be due for a bounce back to the top.

The 100 SMA is below the longer-term 200 SMA on this chart, though, so the path of least resistance might be to the downside. Then again, the gap between the two moving averages is narrowing to reflect weakening selling pressure. Also, price is moving above the 100 SMA dynamic support which lines up with the bottom of the triangle and could continue to keep losses in check.

RSI is on middle ground but seems to be climbing back up to signal the presence of bullish pressure. Stochastic has just pulled out of the oversold region to indicate that buyers are taking over while sellers take a break. This might be enough to take price up to the triangle resistance that lines up with the 200 SMA dynamic inflection point.

Ethereum appears to have lost its legs in the period leading up to the Constantinople hard fork, especially since Fidelity’s crypto chief recently said that this causes some complications.

According to FDAS president Tom Jessop in an interview with CoinDesk:

“We’re currently supporting bitcoin, we have designs to support other coins over the balance of the year center to various criteria including our [in-house selection framework], where we obviously look … at client demand and other things.”

“We’d love to have support [for] ether but you know you have a hard fork coming up and some upgrades, so I think we’re trying to see how those things work out before we make a decision to put them on the platform.”

Still, the upgrades and new features are promising as some analysts say that ethereum might even be poised to outpace bitcoin at some point.