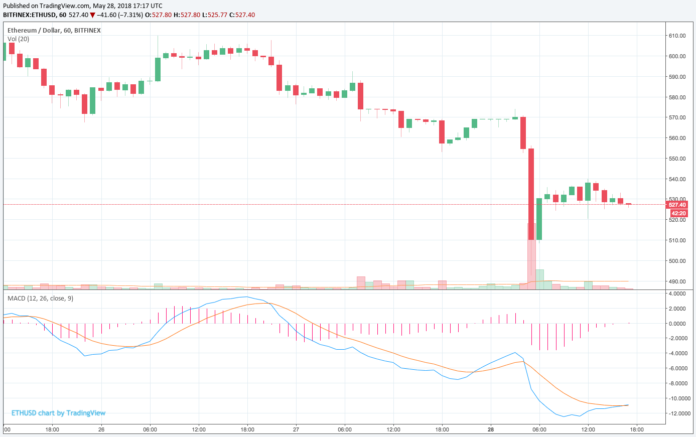 The price of Ethereum (ETH) has fallen today, May 28, with tech site TrustNodes blaming the drop on a large sell-off ETH on crypto exchange Bitfinex that they attribute to EOS.

Wondering who just ragedumped $ETH on @bitfinex. Didn’t $EOS still have a lot of ETH and they were using Finex before. pic.twitter.com/l1Hps2jloJ

Ethereum is currently trading around $515, down 8.49 percent over a 24 hour period to press time. 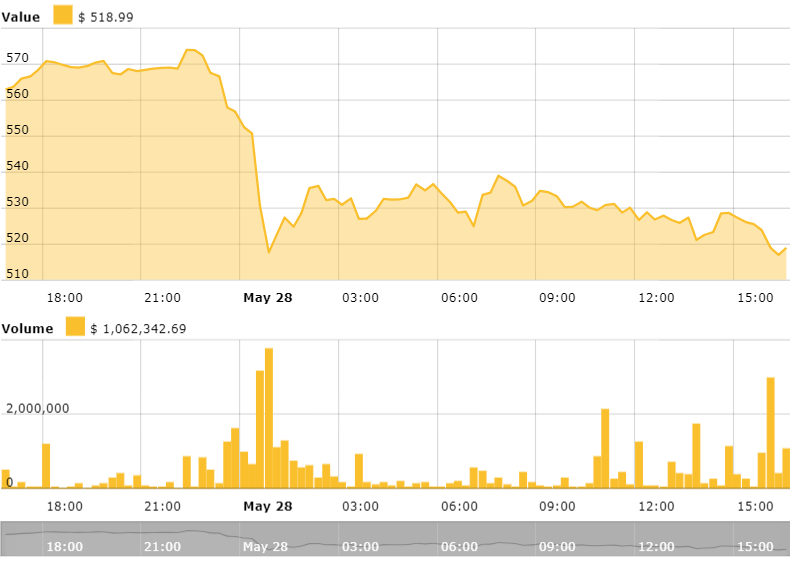 Earlier this month, TrustNodes reported that EOS spent around $950 mln in ETH over the previous 30 days, according to a third party analysis of data from crypto data feed Santiment. Today, TrustNodes writes that around 180,000 ETH was traded in one hour on Bitfinex, as opposed to the 20,000 ETH per hour usually recorded by Bitfinex and exchanges GDAX and OKEx.

TrustNodes suggests that EOS is the party trading the large amount of ETH, as they note that EOS has spent $1 mln in ETH four days ago, and today the number is raised to around $1.4 mln. According to data from CoinMarketCap, Bitfinex has traded in around $238 mln in ETH over a 24 hour period at press time, while OKEx is less than half of that at around $104 mln, and Huobi at around $98 mln. EOS, which will launch their mainnet on June 2, is currently trading for around $12, down by over 4 percent over a 24 hour period at press time.