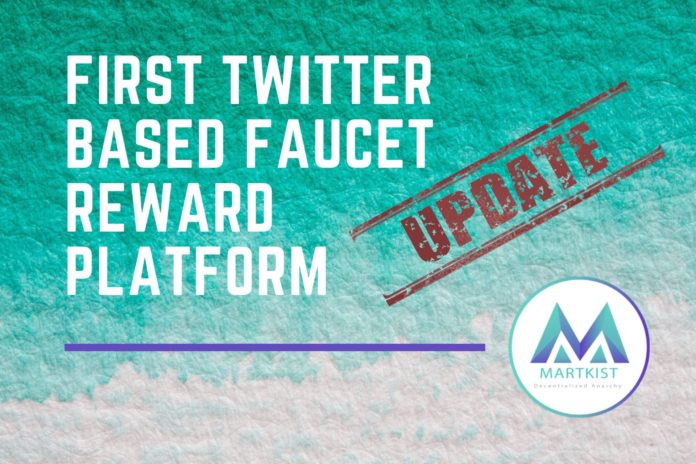 Martkist has always progressed and helped its users develop while strengthening the power of the community. Due to the close association with the current market situation and understanding its dynamics, Martkist has been consistent in developing and bringing new concepts to the market.

Following the development path, this time, Martkist brings yet another efficient and community-friendly aspect to the market, Faucet. A mechanism that allows users to earn rewards on a daily basis and instantly. The Martkist community is already very strong and widespread.

Faucet is a way to redefine further the concept of peer to peer relationship in cryptocurrency and an authentic way to help other users get the benefits of a future-ready and decentralized currency system. To enable the Faucet system, Martkist is leveraging the empowerment supplied by Twitter in terms of networking and sharing.

Martkist is proud to announce that this is the first-ever program that is based on Twitter. Consequently, every user wanting to promote and share the benefits of Martkist needs a Twitter account, to begin with.

Furthermore, users will get multiple rewards for completing the daily tasks accessible from the user-profile. Other than the tasks,  users can also get paid by referring other users to sign up on Martkist, called Referral bonus.

So, with this feature, earning passive income from social media will become easier and accessible to all, and that is the real beauty of Martikist. Everyone who has an account on Twitter and knows about Martkist, can start to earn money instantly.

To become eligible for taking part in the Faucet program, there is a set of criteria. Every user must have:

The move is aimed to bring only quality users to the platform while keeping away bots, malicious, and spammy users.

Martkist is aiming to leverage the power of social media and its connections to enhance their outreach and reward the users in the process.

The Faucet program will include better rewards for top ranking accounts to bring some interest in the activity. This means that users bringing more interaction through their accounts will get better rewards. These rewards also include the referral rewards that further cement the positioning of the cryptocurrency and increase community participation.

Step By Step Process to Use Martkist Faucet

The tasks assigned to the users need validation after the user has completed them. However, validation is automatic. To avail of this automated validation, users need first to integrate the Twitter accounts with the Faucet platform.

Step 3: Post Validation and the completion of the process, the respective user account is credited with MARTK (Martkist’s cryptocurrency). The same platform has a history of MARTK coins.

Either it is the task-based rewards or referral bonus, every user account has a dedicated portal that lists the rewards earned. All the rewards earned can be withdrawn instantly to the Martkist wallet, and they work under A+ security.

For every Faucet task completed, the users will get 0.05 MARTK that can be instantly withdrawn to the wallet. New tasks open up after every hour, and the rewards are also credited to the user account after an hour. For the referral, the users can get a commission of 10%.

To Sum It Up

Martkist is primarily a decentralized marketplace that works on the principles of community governance. Pre-fitted with an assortment of features, Martkist provides a platform for sending and receiving money, lower transaction costs, and access to a marketplace.

Now, another great feature has been added, Faucet Reward Program. Integrating with Twitter, this program goes one step ahead in providing transactional benefits to the users and provides them with an additional way to earn money.