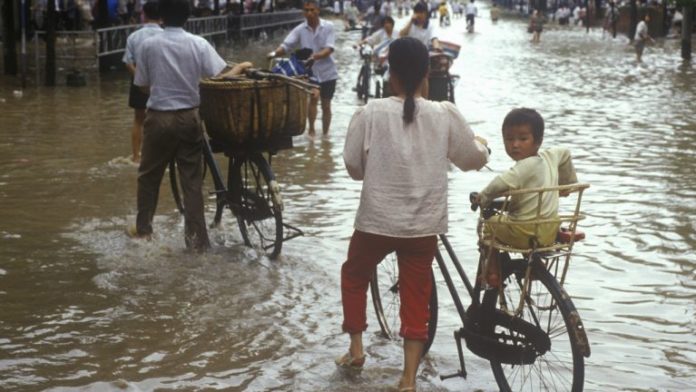 Torrential downpours of nonstop rain have been wreaking havoc in China’s Sichuan province, which has caused some operations to shut down ASIC mining devices. Reports from the region show that certain areas have seen electrical shortages and the aftermath is causing quite a bit of stress for Chinese bitcoin miners.

Not too long ago, news.Bitcoin.com reported on the rain issues in Asia, as a myriad of countries have been dealing with the crazy 2020 monsoon season. Our newsdesk also reported on the alleged problems with the beleaguered Three Gorges Dam. During the last week, China has seen some of the worst flooding in over 70 years.

Now the prolonged rain has caused flooding and landslides in 17 counties surrounding China’s Sichuan province. Sichuan is dealing with serious flooding because it sits on the upper reaches of the Yangtze River.

China is home to a great number of the world’s bitcoin miners (50%) and Sichuan commands the densest region of bitcoin mining facilities in the country.

The rainfall and electrical shortages have been terrible for bitcoin miners causing a number of operations to temporarily halt mining.

“A local mining farm based in Sichuan, China was devastated by the recent heavy rainfall in the region,” Poolin tweeted sharing a video of the situation in August 2019. The mining pool shared another recording of a Chinese worker trying to salvage bitcoin mining rigs from the mud. “Clip of personnel digging out miners from the mud,” Poolin said during the floods last August.

On Tuesday, Poolin again shared another video clip of a mining farm being ravaged during this year’s nonstop rain in Sichuan.

A mining farm located in the Sichuan region has been hit HARD by the recent floods: pic.twitter.com/bwajpYqwEh

Local reports this weekend say that the monsoon season this August is much worse than last summer’s flooding in Sichuan.

On Monday, news.Bitcoin.com reported on the BTC hashrate touching 130 exahash per second (EH/s) on Monday. But now some of the top mining pools in China are seeing 10-15% losses in hashrate.

BTC hashrate is hard to measure and most analytical sites measure the rate every 1-2 days. However, stats from fork.lol measure the BTC hashrate in exahash per second with 12, 6, and even 3-hour averages.

Metrics show that the SHA256 hashrate saw a loss of 15-30 EH/s during the continuous rainstorms in Sichuan. One stat shows the hashrate dropped as low as 101 EH/s during the early morning hours (ET) on Tuesday morning.

Some of the worst devastations affected Neijiang City’s Zizhong County, Wenchuan county, Mianyang City’s Santai County, and more than half of Guidezhen is underwater. Over three dozen rivers and tributaries have exceeded flood levels not seen in decades.