Be sure to waive at @VitalikButerin as we sail past later this week for the final time. pic.twitter.com/JssU8DJ6NV

This appears to have been driven at least partially by a popular rumour on the internet – that an upcoming upgrade on the SWIFT network will make Ripple products available to around 4,000 extra banks. A SWIFT spokesperson has told Finance Magnates that these rumours are untrue.

To get the underlying factors out of the way: Ethereum has been number two in the cryptocurrency rankings as consistently as Bitcoin has been number one. XRP overtaking it in value, however briefly, was quite a coup.

However, it is not so surprising. Over the last year, Ethereum has been declining in value due to competition from new smart contract platforms, and upgrades which seem to be permanently stuck in the ‘coming soon’ stage. Ripple on the other hand has been signing deals with major financial institutions left right and centre.

The SWIFT upgrade is an add-on to its GPI system. GPI stands for global payments innovation, and it was launched in January 2017 to speed up the notoriously slow cross-border payment network, which has been the world standard since the 1970s. Harry Newman, SWIFT head of banking, told the Financial Times in June: “It is no secret that correspondent banking is a 1998 model and we are busy addressing that, bringing it to a 2018 model.” This system is already used by a large proportion of banks on the network.

The upgrade is a technical one, attaching a tracking reference to all transactions. It was announced in March 2018 and will be enacted on the 18th of November.

Finance Magnates reached out to SWIFT. A spokesperson responded: “I’m not sure where those rumours are coming from but the upcoming standards release … is entirely unrelated to RippleNet. Its primary purpose is to ensure all payments include a tracking reference (UETR, Unique End-to-end Transaction Reference) which will allow banks to track their gpi payments end-to-end in real time.”

A source close to the matter told Finance Magnates that having checked with both parties, no evidence could be found of an integration.

Should YouTube Worry About Blockchain Video-Related Platforms?Go to article >>

What are these rumours then?

This Twitter user is excited because a SWIFT board member left his job at HSBC to work with Ripple:

1. Has swift partnered with Ripple? Marcus treacher who is on swifts board leaves hsbc to work with ripple. Also swift have recently stated xborder payments can settle within seconds which is worlds apart from the 30+ mins stated on the last pic, THREAD $xrp $xrpcommunity $btc pic.twitter.com/edKGO6oxGA

Finance Magnates reported on this move when it happened, more than two years ago.

One driver of the rumours is a popular Twitter user called ‘SamIam’, whose secondary username is ‘@ripple_me_this’. Like the previous Twitter user cited, Mr. Iam posts enthusiastically about XRP/Ripple several times every day. The gloating Twitter post (the one in which the word ‘wave’ is misspelt) seen at the beginning of this article is one of his. 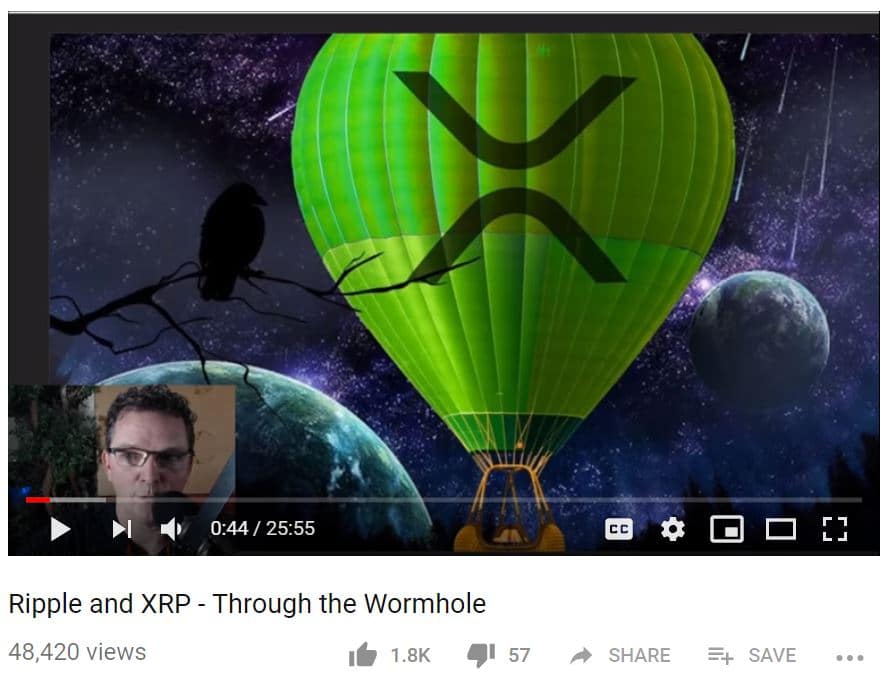 Both of these users argue that software provider Tenemos is the link between Ripple and SWIFT, being as it is a partner of both. SamIam explains (try to ignore that he does not know the difference between ‘your’ and ‘you’re’): 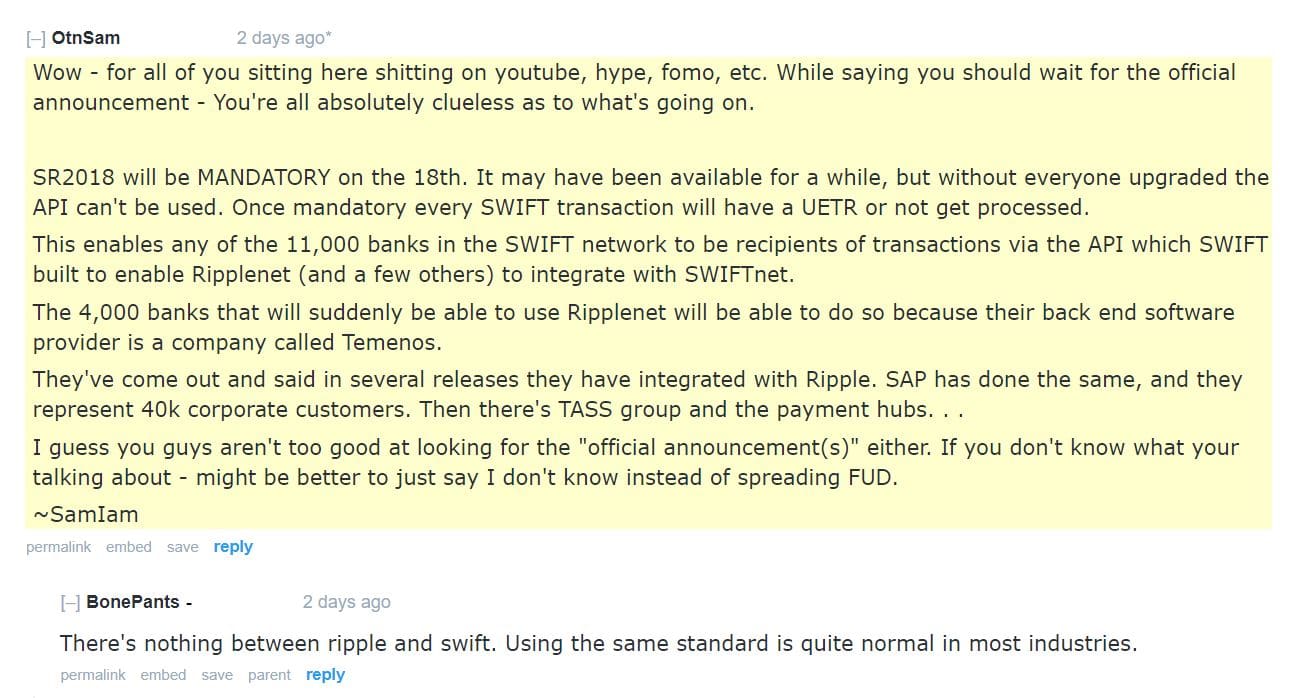 Finance Magnates has reached out to Tenemos and will update this article when a reply is received. 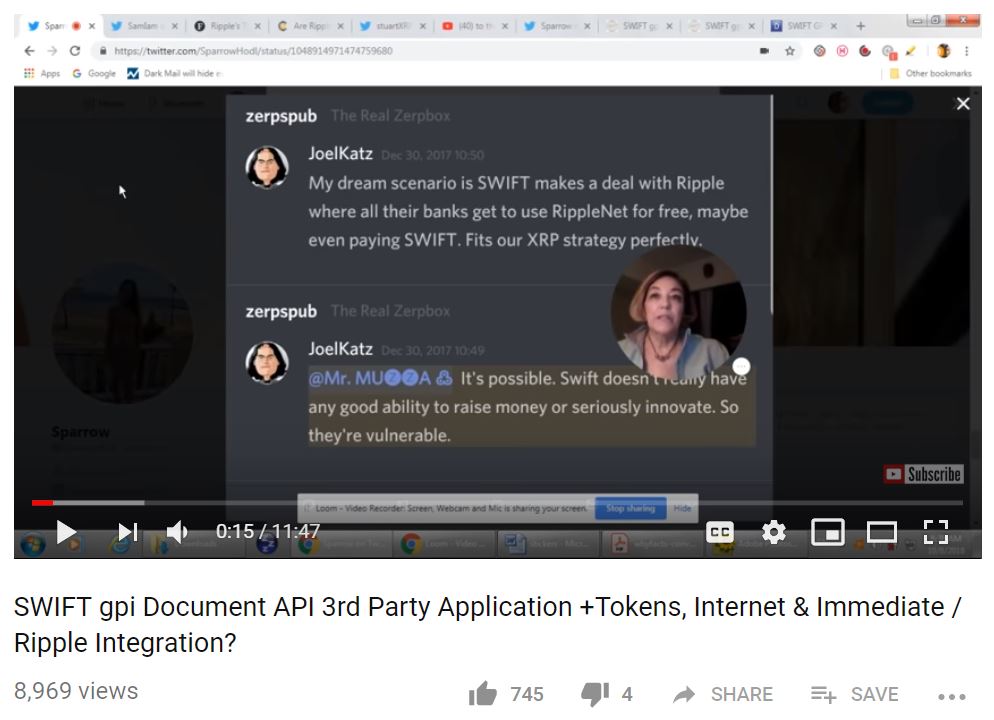 Featured in the above image is an old Twitter post from Ripple’s Chief Technical Officer, which is pointed to as evidence by the individual that posted this video.

Additionally, a cryptocurrency news outlet called Coinounce has published several articles on this subject. It has pointed out that a SWIFT technical upgrade on the 21st of September led to a price spike in Ripple, that the two companies have very similar aims, and that a representative from Ripple is taking part in a panel discussion at a banking conference (AFP Chicago 2018).

True or not, the speculation is not harming the price of XRP:

The common understanding is that Ripple and SWIFT are competitors. Or is this writer just spreading FUD?

On Nov. 4, a Norwegian startup announced the launch of a new peer-to-peer marketplace called Bitruption. Similar to Localbitcoins, the...