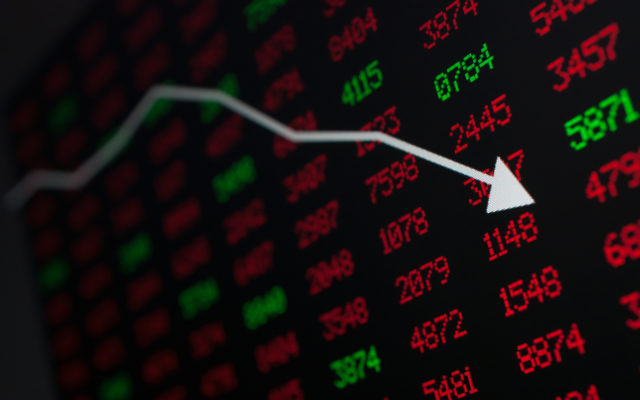 Facebook, Amazon, Apple, Netflix, and Google stocks have shed over $1 trillion in market capitalization from their all-time highs, marking an even bigger loss in dollar value than all cryptocurrencies combined in 2018.

Bitcoin and cryptocurrencies, in particular, are not the only bubble in town.

Stocks of tech stalwarts like Google, Amazon, and Facebook, collectively knowns as FAANG, have lost over $1 trillion USD in market capitalization from their all-time highs.

Comparatively, despite a nightmare year for cryptocurrencies, the total cryptocurrency market cap is down roughly $700 billion from its $830 billion historic high in January 2017. 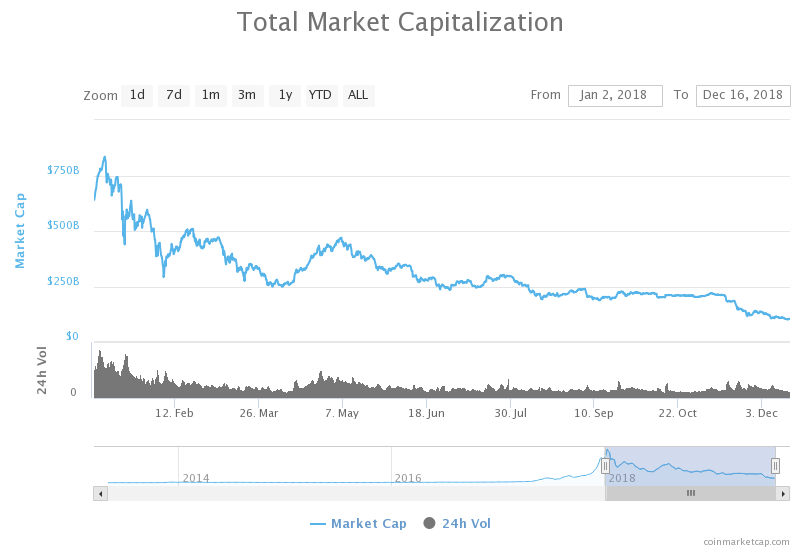 Among the FAANGS, Netflix (NFLX) was the worst performer, down -34.8% for the year (as of December 13th), followed closely by Facebook at -33.7%, according to data from Investopedia.

Apple Inc. (AAPL) didn’t fare much better amid disappointing iPhone sales, down -26.8% stock from its record price – and almost -14% in the past month alone.

Amazon.com Inc. (AMZN) is also dropped by a considerable -19.1% with Google-parent company Alphabet Inc. (GOOGL), right behind with a -16.9% drop. 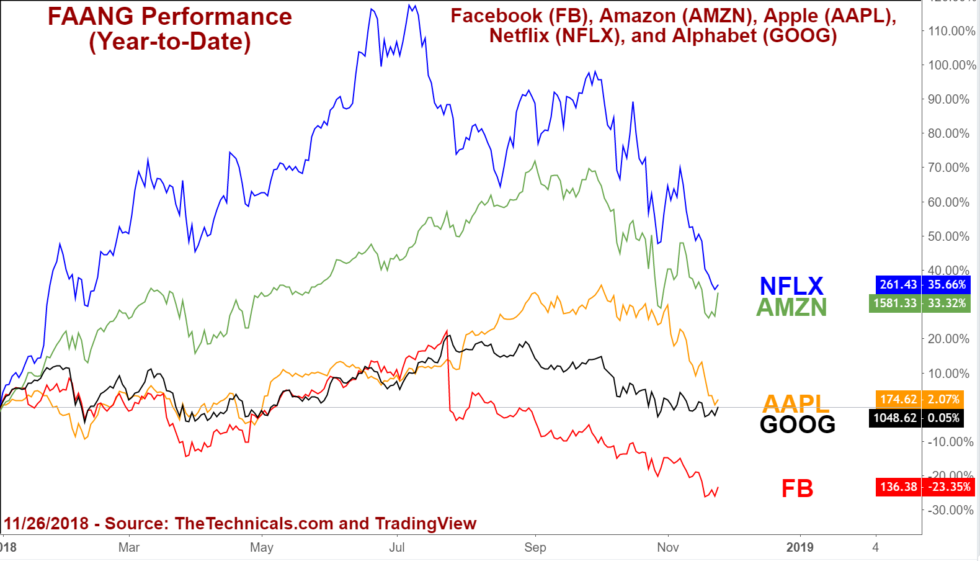 The runup to record high valuations for FAANG shares was an impressive bull period, which appears to now have peaked in July 2018. Interestingly, this month was also the last time Bitcoin (BTC) saw prices above $8,000.
But while the ‘Bitcoin is dead’ narrative appears to be greatly exaggerated, according to a recent study from the University of Cambridge, the cryptocurrency ‘bubble’ is admittedly still relatively more severe than FAANGs’ with an 85% drop.

The S&P 500 and the Nasdaq 100, for example, have fallen by a lower -9.9% and -12.1%, respectively, from their own highs compared to the FAANGs. In fact, the recent stock rout has been led by the once-red-hot FAANG as tech-oriented ETFs saw “massive outflows” in November, reports Bloomberg.
“The conditions that have allowed these kinds of high-growth stocks to outperform have changed, if not reversed,” says David Lafferty, chief market strategist at Natixis Advisors. “I just don’t see much upside.”
Similar conditions may have also allowed for this exuberance to spillover to the nascent cryptocurrency industry earlier this year. Both Wall Street and retail investors began buying into the high-risk, high-reward casino world of crypto and novel ICOs pushing the price to record highs by the end of 2017.
At the time, newly launched Bitcoin futures marked Bitcoin’s entry into mainstream finance, boosting Bitcoin price to new heights. Today, BTC price 00 is down roughly 85% from its all-time high of almost $20,000.

Unfortunately for both stocks and cryptocurrency, Lafferty doesn’t see much hope for the near term as the central bank policy has shaken many investors.
“The Fed’s tightening is getting to where it’s starting to hurt,” he says. “GDP should decelerate in 2019, which will lead to a natural decline in earnings growth. What that means for multiples and investor sentiment is up in the air.”

Elsewhere, protests across France and slower economic growth globally as a whole could be a sign of a looming financial crisis, which in 2008 birthed Bitcoin as a decentralized and apolitical alternative to the existing financial system.

In other words, don’t be surprised to see a divergence between Bitcoin and stock market performance in the future.

Bitcoin adoption has always been driven by bank failures, bailouts, bail-ins, and political unrest. The problem Bitcoin has had recently is its competitor, the US Dollar, has been rising.

Ten years after its birth, it will be interesting to see if Bitcoin – which isn’t a stock or a company share but a digital protocol for transferring value – can eventually decouple from traditional markets and provide a haven during the next bust cycle.

Fundstrat Global Advisors Head of Research, Tom Lee, meanwhile recently called BTC undervalued, given its fundamentals are strong as ever.

“Bitcoin’s fair value, given the number of active wallet addresses, usage per account and factors influencing supply, is between $13,800 and $14,800,” said Lee.

In the macroeconomic climate, Lee holds that treasury sales of initial coin offerings (ICOs) are the reasons for the lower price.

Therefore, the market correction could actually prove to be healthy for Bitcoin, the most secure blockchain in the world, as unprofitable businesses and low-quality projects go belly up, leaving only the cream of the crop for the next bull-run.

Can Bitcoin thrive in the next financial crisis? Will it outperform FAANG stocks in the near future? Share your thoughts below!

The post FAANG Stocks Lose Over $1 Trillion, More Than All Cryptocurrencies Combined appeared first on Bitcoinist.com.