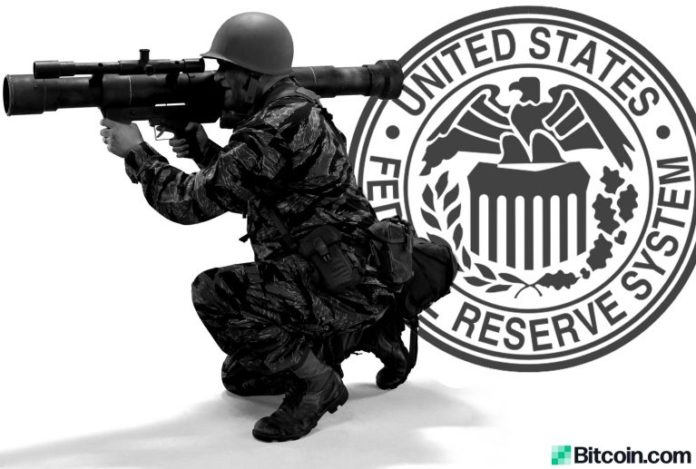 Bitcoin and cryptocurrencies may be the only free-market assets left not manipulated by central banks like the U.S. Federal Reserve. Since the covid-19 outbreak, the Fed has unleashed a massive arsenal of monetary weapons to combat the effects on the economy. After the significant rate cuts, quantitative easing (QE), and buying mortgage-backed securities, analysts believe the Fed could start purchasing stocks in order to quell the economy.

The Fed Is Deploying More Than Just a Monetary Policy Bazooka, It’s Unleashing the Whole Arsenal

On Tuesday, the U.S. Federal Reserve threw another tool into the financial system by announcing an international repo option in order to curb investors from panic-selling Treasuries. Since the covid-19 outbreak started spreading rapidly throughout the nation, the economy has been hit hard by numerous industry shutdowns across the U.S. After closing borders and shutting down major U.S. industries, the Fed has tried to save the American economy by using a variety of monetary schemes. The Fed has introduced rate cuts, quantitative easing (QE), foreign currency swap lines, discount windows, a Commercial Paper Funding Facility (CPFF), a Term Asset-Backed Securities Loan Facility (TALF), and a Secondary Market Corporate Credit Facility (SMCCF). The aforementioned list just scratches the surface when it comes to the newly introduced schemes the Fed has initiated since the covid-19 outbreak.

The Fed also invoked a Money Market Mutual Fund Liquidity Facility (MMFLF) and bought $185 billion in mortgage-backed securities. However, all these moves have not helped stock and commodity markets and the mortgage-backed securities purchase threatened the U.S. real estate market. After the Fed bought the mortgage securities it caused a massive margin call and put hundreds of lenders at risk and without capital.

To those of you wondering what the US stock market will do on any given day, just remember, the Fed has unlimited purchasing power to buy it all up. They have 100 percent full control over stocks and they will do whatever they please with it. Goodbye price discovery. The end.

Despite the adverse effects on the housing market, the Fed is still attempting to insulate the American economy with the central bank’s parlor tricks. The Fed’s new international repo is an unprecedented move by the central bank, as it will provide foreign central banks with the ability to get USD in exchange for U.S. Treasuries. In addition to the international repo, the Fed also revealed it established a temporary FIMA Repo Facility (FRF) to “help support the smooth functioning of financial markets.”

Fed has printed trillion of $ to do what?

Now economists and investors think the Fed’s next move will see the central bank purchasing stocks. Because the American economy is in turmoil, market analysts say that the Fed will likely use this approach soon to bolster the financial system. “If there were any major dislocations, it is clear that they will go into whatever nook and cranny in the market that starts to choke,” chief market strategist at Prudential Financial, Quincy Krosby, told the media on Sunday. The Prudential executive further stated:

Members of the Federal Reserve and the Shadow Open Market Committee have already discussed the possibility of the Fed buying stocks to help the economy. Boston Fed President Eric Rosengren told the committee on March 6 that he thinks the U.S. should “allow the central bank to purchase a broader range of securities or assets.” Cryptocurrency participants believe that the current economy is the “perfect storm” for censorship-resistant and a mathematically probable financial system. Bitcoin has a lot of benefits to a society that has been having significant problems doing what they want with their own money. In the last six months alone, news.Bitcoin.com has reported on governments and banks in countries like the U.S., Egypt, Lebanon, India, and Germany limiting cash withdrawals. Cryptocurrencies like bitcoin have better properties than gold during an economic crisis, as analysts have questioned gold’s alleged ‘safe-haven’ status since the 2007-2008 financial catastrophe. It’s a well known that central banks oversaturated bullion markets during those years by using bullion-bank repos just like they do with Treasuries today.

Cryptocurrency markets did decline with everything else under the sun on March 12th, otherwise known as ‘Black Thursday.’ The decline has made people assume that BTC and other digital assets have a strong correlation with stocks and equities right now. However, historical data shows digital asset markets have always been non-correlated with stocks, commodities, and equities. A higher correlation during a black swan event (covid-19) doesn’t equate to both markets being tethered together whenever economic environments change.

As the Fed and central banks worldwide pull out every tool they have in the monetary policy toolbox, bitcoiners understand that digital assets cannot be manipulated as easily as fiat currency, property investments, precious metals, and the stock markets. If you have never read or heard about the positive benefits and economic freedom bitcoin can provide, get started today with some of our educational resources.

What do you think about the Fed possibly buying stocks next? Let us know what you think in the comments below. 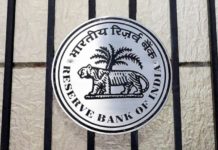 As the bitcoin halving approaches, crypto-mining ‘death spirals’ and miner capitulation have become prominent topics among digital currency enthusiasts. Despite...