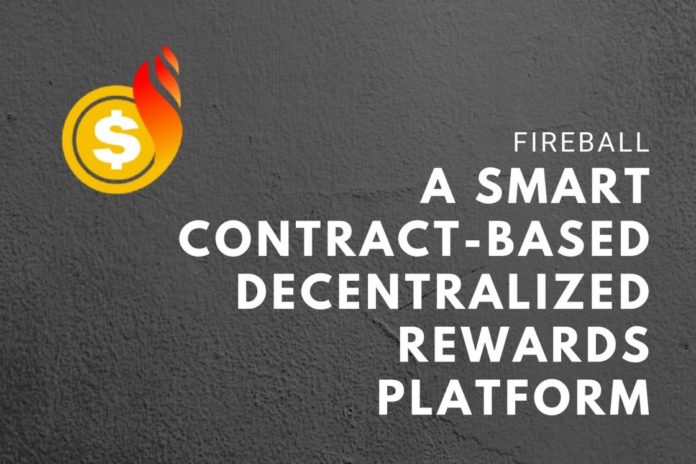 A majority of the blockchain projects today are moving to the Proof-of-Stake (PoS) consensus model due to its ability of higher performance efficiency and scalability.

The PoS platforms allow users to stake their digital currencies and run validator nodes on the platform thereby ensuring the platform security and smooth working. However, there are not many indigenous platforms in the market that reward the stakers consistently.

Fireball is one such di-functional autonomous staking rewards and gaming platform. Fireball leverages the power of blockchain-based decentralized smart contracts to set up a system in place that completely automates the process of rewards the staking.

The Fireball blockchain platform has its own native cryptocurrency dubbed FIRE token which operates using a unique deflationary concept.

The Fireball platform encourages users to hold and stake their tokens for the long-term and rewards them for doing so. For each transfer initiated on the platform, the FIRE token burns part of its supply.

The FIRE token makes use of deflation economics as part of its price behavior to reward the token holders and penalize the sellers. For every FIRE token transaction on the Ethereum network, the FIRE token charges 10% in fee. 5% of this is burnt and the remaining 5% get distributed to the stakers immediately.

The FIRE token smart contract is completely secured and open sourced. Because of the upward price action, the FIRE token powers the entire Fireball ecosystem and serves as a high-yield store of value.

The Fireball staking dashboard makes it easy for users to stake their FIRE tokens with the minimum staking requirement of just 1 FIRE. To do this, one can use the IGNITE FIRE BUTTON on the dashboard and put the amount to IGNITE.

After selecting the amount, one can choose the compatible wallet to stake FIRE tokens. Just pay the gas fee and submit it. As soon as the transaction is confirmed, dashboard will reflect it.

To discourage the sellers from moving out of the staking process, the Fireball platform has also introduced an Unstaking penalty. This UNSTAKING penalty encourages users to hold their FIRE tokens and continue staking. The UNSTAKING penalty drawn by the platform gets distributed among other stakers as a reward for continuing.

The Fireball platform popularly uses terminologies like ‘Ignite FIRE’ to refer staking, and ‘Quench FIRE’ to refer unstaking. Fireball has said that Igniters with staking periods of 60 days, 90 days, 120 days and 150 days will get additional rewards.

Below is some of the FIRE token economics explained:

The FIRE Token is already listed on some of the most popular listing platforms like CoinMarketCap and CoinGecko. Hence users can get the real-time value of the FIRE token 24×7.

The Fireball project is currently in its next phase of development. For this month of August, the developers will be focusing on Liquidity Staking and more importantly move ahead with the development and launch of the Fireball Gaming Platform.

Bitcoin has finally started to show weakness after recovering from last weekend’s flash crash. After falling as low as $10,500...