A cryptocurrency company called Team JUST is openly perpetrating an exit scam and a pyramid scheme, and has made millions of dollars (and counting).

The exit scam is called FOMO3D (url – exitscam.me). It explains on the homepage that it is a ‘psychology social experiment in greed’.

It consists of a pot of money and a count-down timer. When a user buys a key with Ethereum, the money is put in the pot and thirty seconds is added to the clock. The last person to buy a key takes all the money. 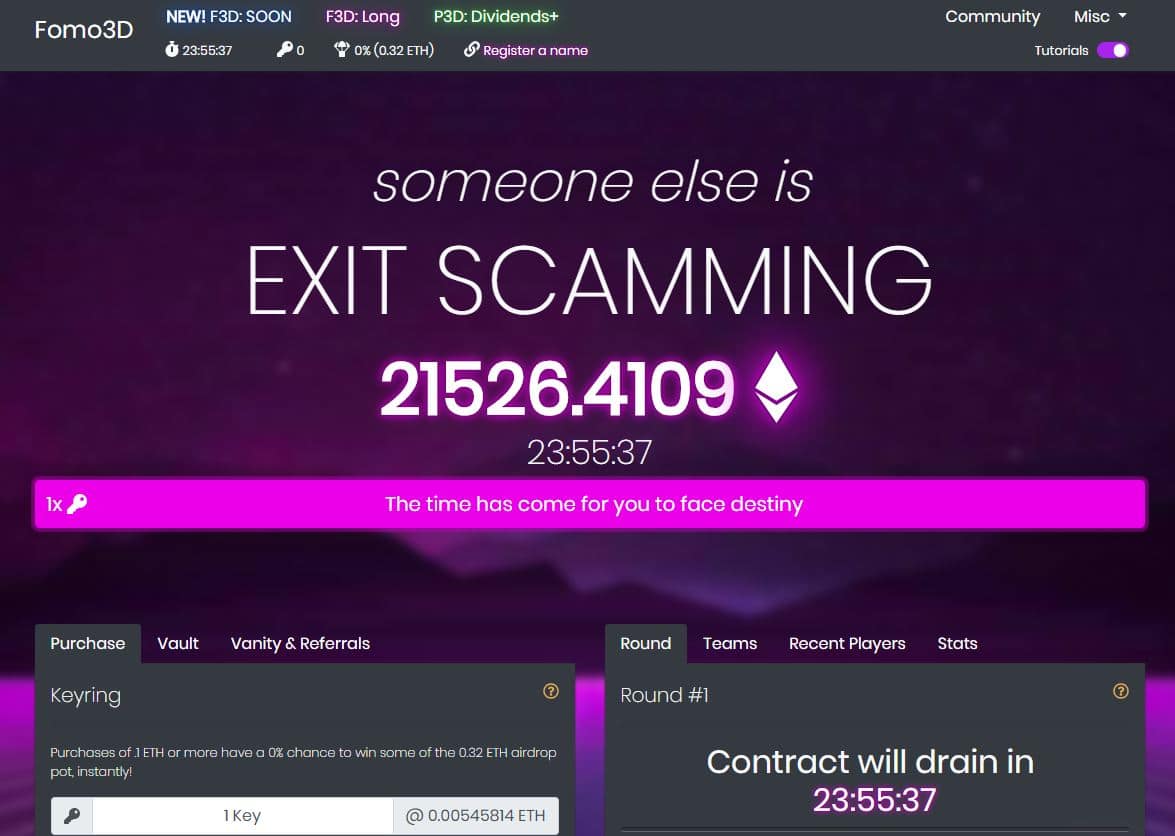 There is a further incentive to participate – as a key holder, a small proportion of the pot is given to you on a regular basis.

A clever feature is that the website tells you the username of the last buyer – “[insert name] is EXIT SCAMMING”.

The pyramid scheme is called POWH3D. It is a cryptocurrency exchange which a set 10 percent transaction fee. Users purchase P3D tokens using ETH, and the transaction fee money is split between all token holders. 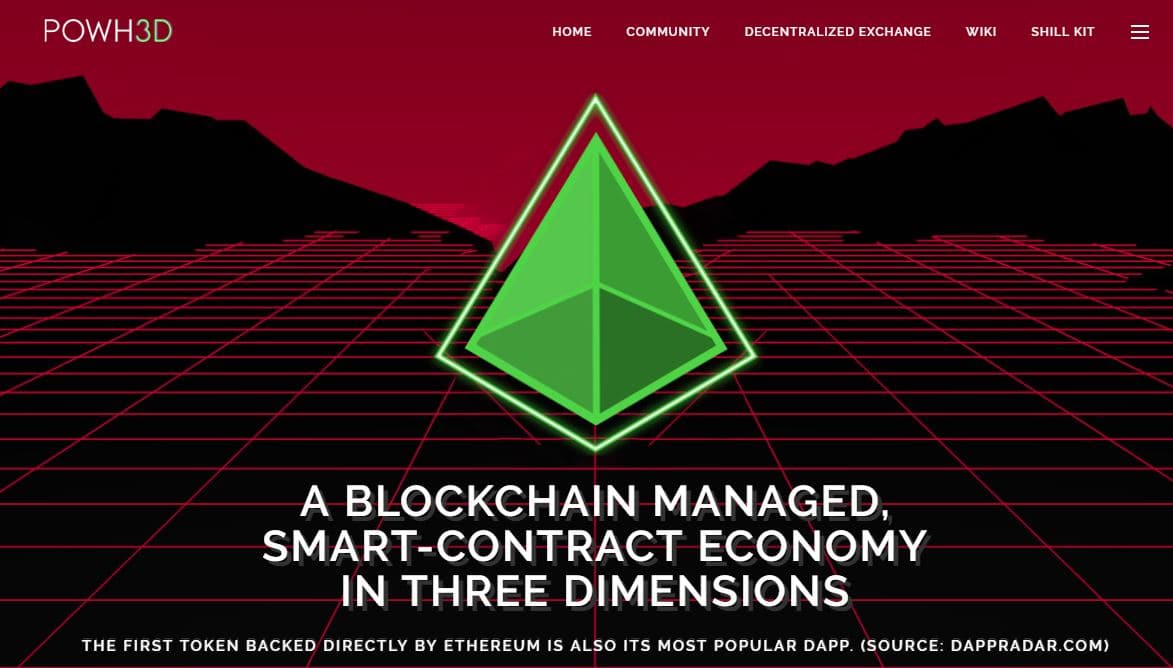 Source: powh.io
Note the ‘shill kit’ in the tool bar at the top.

According to the Team JUST website: “To this date nearly 342,000 Ethereum in volume that has passed through P3D, including nearly 34,000 ETH in dividends to the community behind it. The mechanics we pioneered have been forked thousands of times, and implemented into multiple full scale massive projects (like EOS, yes we’re serious)..”

The team claims on its website that the two projects are run on smart contracts that have been carefully programmed so as to not allow the team to take the money: “We have no control of the funds or balance, and it’s run entirely without human intervention based on the code!”

In keeping with its parody of ICO projects, the team is “a completely decentralized and distributed team living around the globe…anonymous even to one another.”

Apparently, you no longer need to trick people to scam them

It is well known that the cryptocurrency world is rife with scams – one recent study found that half of the money invested by Russians went to pyramid schemes. In that this industry is not unique, but what is remarkable is the phenomenon of people investing money in projects that do not even claim to be legitimate.

Maybe the most well known example is Dogecoin, a cryptocurrency set up as a joke. Created in 2013 to parody the multitude of altcoins in the market, it now has a market capitalisation of $404 million and processes more transactions that Bitcoin Cash.

Another example was a dramatic spike in the price of Bitcoin cause by Chinese people rushing to participate in the project of a person who was literally famous for being a scam artist. Sergei Mavrodi re-launched his ‘Mavrodi Mondial Moneybox’, which led to the suicides of at least 50 victims in Russia and earned him four years in jail, as ‘MMM Global’. The revamped project focused on Bitcoin and had thousands of users in India, Nigeria, the Philippines, South Africa, and Brazil. After this scam Mavrodi went into hiding again, only to re-emerge to release his own cryptocurrency in December 2017.

He passed away in March 2018 of disputed causes, and his funeral was paid for with money made through one of his pyramid schemes.

Another interesting case was a German ICO project called Savedroid, whose CEO Yassin Hankir disappeared with $50 million before trying to claim that the whole thing was a joke – he was trying to make a point about scam ICOs. In that particular case, people were not impressed at all – its bank said that it “fails completely to understand the PR stunt of savedroid’s CEO Yassin Hankir as we prefer working with professionals.”

Apart from outright scams, there are many examples of projects which can be best described as frivolous. Nimipet is a game which supplies you with a digital pet whose only purpose is to grow according to how much money you feed it, while the people behind the project watch their bank accounts grow in tandem. On another website, people pay one satoshi to make a single move in a game of Pokemon. Of course, users could purchase a Gameboy or download the game onto their computers and play without having to pay for every move, but then, where would be the fun in that?