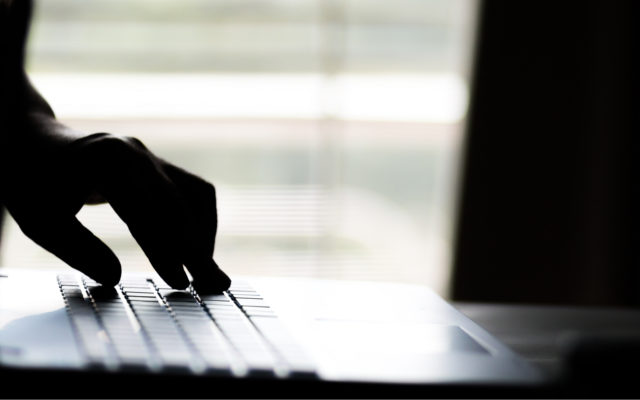 On July 18 @notsofast, a twitter user claiming to be a former developer at Cryptopia, tweeted a link to an article which he claims provides “the complete story of the fraudulent hostile takeover of Cryptopia_NZ by Intranel from its founders Adam and Rob” 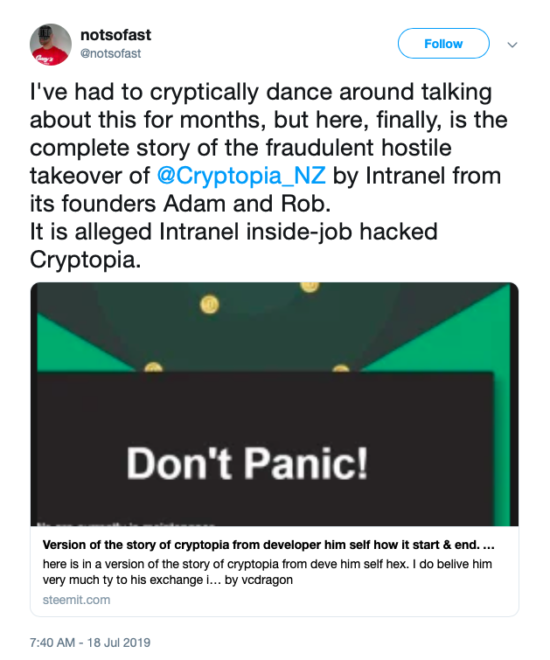 According to vcdragon, the author of the steemit post, he and Cryptopia co-founder (Adam) began building Cryptopia as a hobby project around January 2014. As the project took form, Adam eventually resigned from his developer position at Intranel.

vcdragon explained that Intranel did not want to lose Adam as an employee and offered the duo a room to rent in their company office. Intranel’s interest continued to grow as the crypto market and exchange took off.

At the start of 2017, Adam and vcdragon felt that they could benefit from the business development support Intranel could provide. vcdragon explained that:

Intranel made us an offer that for 20% of the company they would handle all of the business management and development things like helping with hiring and managing staff, paying tax, lobbying for regulator guidance and all the ‘boring’ business stuff.

The firm also offered to contract 4 of their staff to the developers at a discounted rate and also provide assistance with finding top talent for Cryptopia. It was at this point that the story takes a turn for the worse. According to the lengthy and detailed post, Intranel hired staff for themselves and contracted these newly acquired employees to the Cryptopia founders at “exorbitant rates”. New staff were given unwarranted managerial latitude and once Cryptopia was reliant on new staff, Intranel demanded an extra 5% equity in the exchange.

Eventually, Adam resigned from the pressure and vcdragon followed Intranel’s advice to take a holiday in order to avoid burnout. vcdragon claims he was not paid during his 1 month holiday and found that his workspace had been filled upon returning to Intranel.

Vcdragon also said Intranel issued a dividend to everyone except Adam and himself, and explained that Intranel “forced the extra 5% as they needed the extra shares to block any major transaction the company tried to undertake so that we could not achieve a 75% threshold.”

The former developer alleges that Intranel bled Cryptopia dry while also methodically absorbing the company into its ownership. Intranel supposedly issued themselves a loan for $300,000 to cover “startup costs” and they repeatedly took on clients using Cryptopia’s name, then billed the company for the work.

They bled money everywhere they could, we paid for tax on their staff’s flu shots? We paid taxes on Christmas fits to their staff and our company bought the gifts. Everything they were unable to take for themselves they pissed into the wind on needless expenses and luxuries to the company could not afford….that ultimately buried us.

Apparently, Intranel attempted to sell the company right “out from underneath” the co-founders on 3 separate occasions. By the time Intranel was forcibly separated from Cryptopia, the company was nearly bankrupt.

Vcdragon ends his article by concluding that he believes the hack was intentionally deployed to cover all of the idiotic business practices. Their plan to completely absorb and wreck Cryptopia was interrupted after they were “forcibly removed from the company”. Vcdragon fears that the saga is not yet complete as Intranel are currently partnered with ANZ, a bank that previously refused to provide Cryptopia with banking services, and PWC, a firm which is tasked with providing legal counsel to Cryptopia.

Do you believe vcdragon’s side of the tale? Share your thoughts in the comments below!

In the last 48 Hours, Bitcoin has broken to the upside as bulls attempt to regain control of price action....