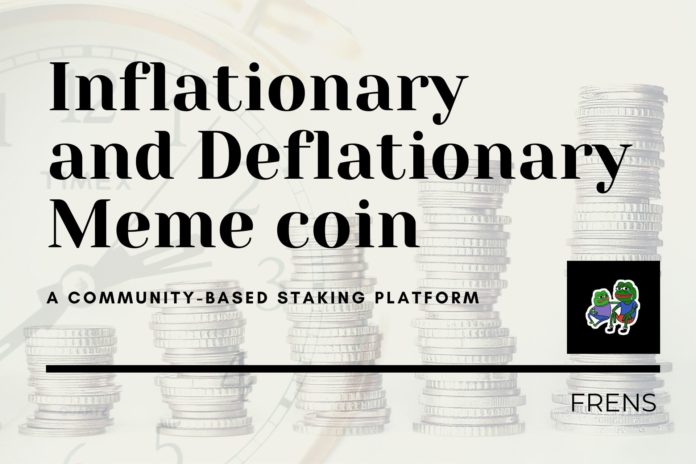 Based on the KEK blockchain, Frens is a community-based staking platform based on inflationary and deflationary work principles. Frens allows users from across the globe to join and start staking with multiple exchanges. It is listed on Coingecko, Coinmarketcap, Uniswap, and other major exchanges.

This community-first DeFi platform conducts simultaneous burning of the coins to keep the price from behaving inadvertently. The price of any coin is bound to rise with the help of staking, so to curb a high increase in the value, a 10% tax is levied on all the transactions conducted on the platform, and they are burned. This keeps the higher price increase in check.

The Frens Wallet allows the users to plot and track the coins. However, the wallet is still under production, along with a few other products that are already listed on the roadmap. Frens represents an inclusive community that allows its members to stake, pledge, and donate the coins. Staking the coins will also bring the users benefits in terms of voting power and an increased value of the coin after the staking period is over.

One of the most significant benefits of Frens is that the core development team has time-locked, and the developers cannot mint tokens. Out of the total liquidity supply of the Frens, 40,000 is already listed on Uniswap and available to buy for the users. Because this is a DeFi platform, the pricing will be decided by the community at large.

Furthermore, to ensure that the price does not increase exponentially, Frens has been given a burn mechanism to control the price. Out of the 10,000 remaining Frens, 5000 are going to be vested by a Smart Contract and released in the chunks of 50 Frens every day for 100 days.

Locked liquidity also means that the development team and the founders cannot execute the rug pull scam with the users. The liquidity supplied by the users on the platform is always protected and ready to be scaled.

Staking the Frens within the community and the staking rewards are segregated for different stake quantities. Higher the stake means better rewards and vice versa. To stake on Frens, the user first needs to connect with a web wallet. For staking through the browser, it can be done with Metamask.

Staking keeps the circle running and keeps the community engaged with each other. Furthermore, the users need not set a minimum staking amount. Staking can begin from a single Frens token. However, the minimum and the maximum number of days for staking are 10.

Unstaking before this time period means 0 rewards to the user. Once the staking period is over, the users have to stake again. This ensures that no one user can leverage higher rewards because of the higher stake value.

All in all, Frens is a community-first platform, and it takes care of the community with such innovative methods. The staking rewards on Frens are decided by the number of days the coins are staked.

Less than 5 days, there is no reward. Unstaking on the 5th or the 6th day will get the user a 2% reward on the staked pool. Going ahead, staking for 6-7 days means that the user can get 2.5% of the pool as staking rewards.

Staking for up to 9 days means a 5% reward, and staking to the end of the cycle for 10 days provides a 10% reward to the user.

Another source of passive income for the Frens community arises from the Donation Pool. 5% of every transaction, transfer, buy, and sell is sent directly to the donation pool. Since it is a platform that takes care of the members, every member indulging in staking can claim 1% of pooled donation every day.

However, only the users that have staked for at least 10 days can claim the 1% extra reward. This means that it is a recurring income generation source for the community members.

The recently launched transactions tracker has been embedded into Frens for the community. Every transaction that is done on the wallets will be visible on the tracker. The performance metrics of the trackers show how added coins on the wallet have been performing starting from the moment they were added onto it.

The wallet will be connected with metamask to the central platform and shows the ERC20 tokens owned by the user.

Frens is an upcoming and community-driven platform that allows the users to provide liquidity and stake on the platform by following the principles of a decentralized economy. It runs under the Ethereum blockchain with ERC20 tokens.

Frens also conducts several events like the Soft Bounty Campaigns to bring the community together to garner user’s interest and distribute free Frens. All in all, Frens is still an evolving marketplace that wants to stay ahead and take the community forward.