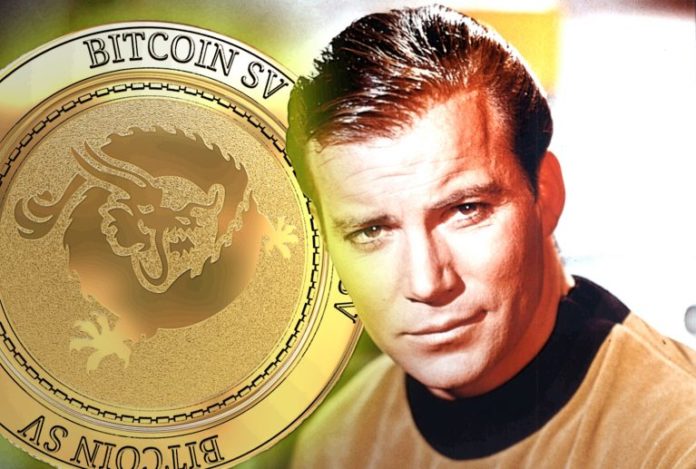 The Bitcoin SV network and the infamous Craig Wright have been publicly scrutinized by two well known individuals. Wikipedia’s Jimmy Wales criticized BSV technology and said he doesn’t think recorded data from Wikipedia would be beneficial stored on a blockchain like BSV. Moreover, former Star Trek actor William Shatner tweeted about Craig Wright’s claim of being the creator of Bitcoin and told the public Wright’s bonded courier story is a scene right out of the film “Back to the Future.”

On February 10, a few days after the Bitcoin SV ‘Genesis’ hard fork, Arthur van Pelt tweeted about the number of nodes on the BSV network dropping like a rock. “Six days after the BSV Genesis downgrade, it appears more and more to me that some 80-85 nodes have forked off and are creating a new chain after block 620538,” van Pelt stressed. “Another 30 nodes are left behind in the process [and] only 250 nodes are now left — A year ago, BSV had 636 nodes.”

In addition to the node issues this week, the public has been observing a conversation between BSV supporters and Wikipedia founder Jimmy Wales. Prominent BSV supporters like Kevin Pham and Daniel Krawisz tweeted to Wales and said that it would be beneficial to Wikipedia if the company adopted the BSV chain. “It would be so cheap to record enough information about all Wikipedia interactions on the BSV blockchain,” Krawisz explained in a recent tweet. “What the blockchain does though is record an immutable record of the history of a Wikipedia page’s edits,” Pham tweeted to Wales. The Wikipedia founder responded to Pham’s comment:

We have that. It is called a database.

When Wales responded to Krawisz, he noted that he didn’t understand what was being proposed. “I was just thinking about how you said you didn’t like Bitcoin and imagining ways that it could be used to improve Wikipedia. More generally, Bitcoin can help any system to become more Byzantine fault-tolerant,” Krawisz replied. The Wikipedia founder again said: “But what specifically are you proposing?” Following a few more remarks from Krawisz, Wales said that he’s thought very deeply about it and stated: “You can’t even explain what you are proposing.”

The Bonded Courier Story Is a Scene Right Out of Back to the Future, Says William Shatner

Wikipedia’s Jimmy Wales is not the only celebrity speaking about the controversies surrounding BSV. Star Trek star William Shatner gave his thoughts on Craig Wright’s claim to being Satoshi Nakamoto as well. A BSV supporter tweeted to Shatner that “Craig is Satoshi and BSV is bitcoin.” The former actor who played the famous role of Captain Kirk responded “Why can’t he prove it? From what I’ve read is that some mysterious bonded courier would deliver the keys (which honestly is a scene right out of Back to the Future.) If he is, he should be able to prove it.” Shatner continued:

The Shatner tweet about CSW and the bonded courier got the crypto community all fired up and there’s plenty of responses to Shatner’s tweet. Coingeek owner and BSV advocate Calvin Ayre disagreed with Shatner’s opinion. “He can prove everything…He had all the evidence in with his lawyers preparing for trial with McClown [podcast host Peter McCormack] which is real proof. He owes us all nothing in this and having keys is not proof like what he is doing in court. Plus to me the proof is out there already if [you are] smart,” Ayre tweeted.

Former Bitcoin Foundation director Bruce Fenton replied to Ayre’s claim. “No one asked for proof until he volunteered,” Fenton wrote. Shatner again took to Twitter and responded to the BSV community’s statements about his tweet.

“It’s really amusing to watch these crypto kiddies frothing because I question a statement made by some guy,” Shatner detailed. “It’s almost as bad as the Outlander trolls who have created a fantasy of lies while ignoring everything that has been said [and are] making excuses for it.”

A number of people wondered why the Star Trek star was commenting on a cryptocurrency subject, not realizing that Shatner has been involved in the space for quite some time now. Shatner has tweeted about bitcoin, cryptocurrency and blockchain technology on many occasions. Shatner is also involved with a blockchain project called Mattereum, which claims to help prevent collectibles fraud by leveraging a distributed ledger.

5 Best Places to Bet with Bitcoin

It seems like BTC is always making headlines for one reason or another. When the market points towards bullish behavior...