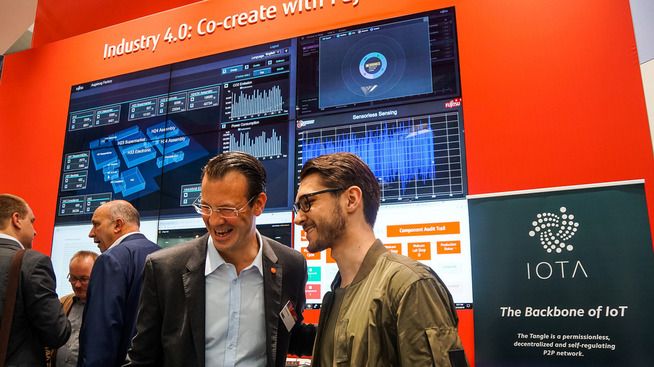 “We do not have a crystal ball, but we do not want to let this train pass us by,” says Rolf Werner, head of the Fujitsu Group in Central Europe, about the company’s commitment to iota, the cryptography, founded by the Norwegian David Sønstebø.

The Japanese company is one of the world’s largest IT services providers and has around 155,000,000 employees worldwide.

“People have a tendency in technology, to overestimate how fast things develop and underestimate the impact of technology,” says Werner on block technology.

In April, Fujitsu boss was advised for the Iota Foundation.

Please use the bitcoin blockchain

It’s good over a year since Werner himself became interested in the cryptoover when the Fujitsu boss attended a bank conference.

“I was in conversation with key bankers I know who talked about bitcoin and blockblocks. It made me think and investigate the technology, and I contacted one of the founders of iota technology, Dominik Schiener, who lives in Berlin.

Iota’s technology, like the technology behind most other cryptographic currencies, has met with skepticism to be untested and at a very early stage.

Werner agrees with the critics’ time horizons, but focuses equally heavily on block technology in Europe and Japan.

“It’s probably 3-5 years until we see real applications from this technology,” he said with reference to iota.

Fujitsu considers that iota technology can be used for payments between machines, secure and more transparent supply chains, as well as buying and selling data.

At the world’s largest industrial fair in Hanover, Fujitsu had a collaboration with iota, which had set up collectibles models where the activity on the assembly line was registered on iota’s distributed database (tangle).

The company has also established a separate center for the development of block technology located in Brussels.

“We are involved in many different blockbuster projects, and open to many different technologies, both iota, hyperledger or bitcoin block chain for that matter.

– How much have you spent on the project with iota?

“We do not use large resources on this today, and it is not part of our R & D plan. It is still at a concept level, he says.

He emphasizes that Fujitsu will in no way be linked to the cryptographic side of block technology.

Werner is not critical of cryptovaluta but says it’s about being objective.

“I do not own a crypto currency, and it’s only about being neutral to our different blockbuster projects and our customers.

He refers to the Bosch fund RBVC, which in December invested millions in iota’s crypto currency.

“It is not meant to be criticism, but Bosch invested earlier this year in the crypto currency of iota, and I’m sure they often have to explain that investment.

Do not care about criticism

Like bitcoin and Ethereum, iota has also received its criticism, both when it comes to technology and founders.

The founders of iota, David Sønstebø and Dominik Schiener have not intervened in response to the criticism, and have been fiercely criticizing social media.

The Fujitsu boss has received criticism and believes it is only natural that new ideas meet resistance.

“They say what they mean and I understand that they want to communicate in a certain way when they deal with is so new and far from established. Not everyone is happy with it, but it creates attention and it is also important if you want somewhere with new technology.

Fujitsus satser på norsk kryptoteknologi was originally published on min.e24.no.The IOTA-News Community curates, examines, and summarizes news from external services while producing its own original material. Copyrights from external sources will be credited as they pertain to their corresponding owners. The purpose is to make use of 3rd party content or pictures as either allusion or promotional endorsement of mentioned sites. If you have a claim of copyright infringement with respect to material, please mail to support[at]iota-news.com. IOTA-News.com is a community run website and is NOT affiliated with the IOTA Foundation in any way.

Some ‘easy’ ways to earn Bitcoin

Bitcoin has managed to maintain its value despite projections by many analysts at the end of last year that it...