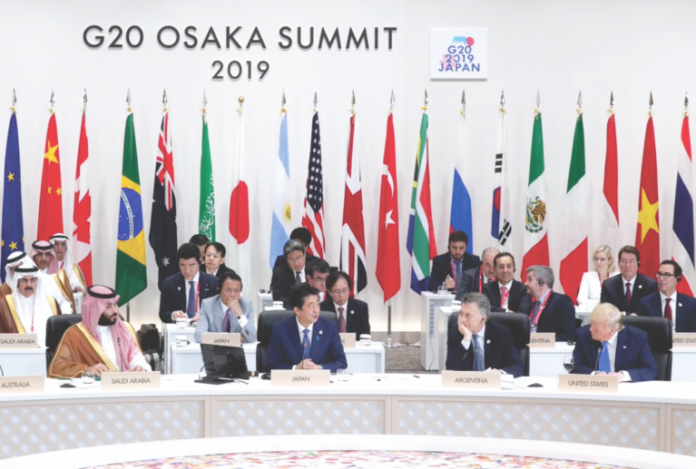 The G20 leaders jointly issued a declaration on crypto assets at the end of their summit in Osaka, Japan. They declared their commitments, reaffirmed that crypto assets do not pose a threat to global financial stability, and requested further work done by standard-setting bodies.

The G20 leaders’ summit, the largest meeting Japan has ever hosted, wrapped up Saturday. During the two-day event, the G20 leaders and the heads of invited guest countries and international organizations met to discuss important issues including the global economy, trade and investment, innovation, digitization, and global finance. At the conclusion of the summit, the G20 leaders jointly issued a declaration which includes statements on crypto assets.

“We, the leaders of the G20, met in Osaka, Japan on 28-29 June 2019 to make united efforts to address major global economic challenges,” their declaration begins. “We will work together to foster global economic growth, while harnessing the power of technological innovation, in particular digitalization, and its application for the benefit of all.”

On the subject of global finance, the G20 leaders said that “Technological innovations can deliver significant benefits to the financial system and the broader economy,” elaborating:

While crypto-assets do not pose a threat to global financial stability at this point, we are closely monitoring developments and remain vigilant to existing and emerging risks.

The leaders’ declaration adds to the joint statement by the G20 finance ministers and central bank governors at the end of their meeting in Fukuoka, Japan, on June 8 and 9. The finance ministers and central bank governors specifically mentioned the risks from crypto assets relating to “consumer and investor protection, anti-money laundering (AML) and countering the financing of terrorism (CFT).”

Requests to FSB and Other Standard-Setting Bodies

The Financial Stability Board (FSB) is an international body that monitors and makes recommendations about the global financial system. The Board submitted three reports to the G20 Finance Ministers and Central Bank Governors Meeting. The first was a directory of crypto asset regulators. The second details standard-setting organizations’ regulatory approaches and work underway on crypto assets. The third focuses on the financial stability, regulatory and governance implications of decentralized financial technologies. We welcome on-going work by the Financial Stability Board (FSB) and other standard-setting bodies and ask them to advise on additional multilateral responses as needed.

Their declaration adds: “We also welcome the FSB’s work on the possible implications of decentralized financial technologies and how regulators can engage other stakeholders. We also continue to step up efforts to enhance cyber resilience.”

FSB Chairman Randal K. Quarles sent a letter to the G20 leaders ahead of the summit, outlining progress by the Board over the past year. “Harnessing the benefits of financial innovation while containing risks – a deep and early understanding of how technological innovation may transform financial institutions and markets is key for harnessing benefits while containing risks,” he wrote. Using crypto assets as an example, Quarles stated:

A wider use of new types of crypto-assets for retail payment purposes would warrant close scrutiny by authorities to ensure that they are subject to high standards of regulation.

“The FSB and standard-setting bodies will monitor risks very closely and in a coordinated fashion, and consider additional multilateral responses as needed,” the chairman’s letter concludes.

According to the FSB, some members noted that “the policy implications of crypto-assets do not always fit neatly into existing remits, which could result in significant regulatory asymmetries, potentially including with respect to investor and consumer protection issues.” Meanwhile, some members “consider that the majority of issues can be addressed with existing policy tools.”

In conclusion, the Board “recommends that the G20 keep the topic of regulatory approaches and potential gaps, including the question of whether more coordination is needed, under review.” In addition, the G20 finance ministers and central bank governors “welcome progress on the FSB’s initiative to identify effective practices for response to and recovery from cyber incidents.”

No Risk to Financial Stability

The Board additionally wrote that it “assesses that vigilant monitoring remains warranted particularly as a variety of new products and services seem to be under development.” Another report on crypto assets including developments in stablecoins and tokenization will be published in September. Another standard-setting body that has been actively working on crypto assets is the Financial Action Task Force (FATF), an intergovernmental organization which develops policies in areas such as combating money laundering. The FATF issued new guidance on the risk-based approach for virtual assets and virtual asset service providers (VASPs) on June 21. However, some industry participants have raised concerns over the implementation of some of the recommendations.

Regarding work done by the FATF on crypto assets, the G20 leaders’ declaration details:

We reaffirm our commitment to applying the recently amended FATF Standards to virtual assets and related providers for anti-money laundering and countering the financing of terrorism.

They further declared: “We welcome the adoption of the Financial Action Task Force (FATF) Interpretive Note and Guidance.”

At the end of their two-day meeting on June 9, the G20 finance ministers and central bank governors similarly declared: “We reaffirm our commitment to applying the recently amended FATF Standards to virtual assets and related providers for AML and CFT.”

The FATF issued a report on June 27 ahead of the G20 summit to update the leaders regarding its work on crypto assets. “Under the Japanese Presidency, the G20 has continued to express its support for the FATF with a view to promote swift and effective implementation of the FATF standards worldwide,” the money-laundering watchdog explained, adding:

Technological innovations, including those underlying virtual assets like blockchain and other distributed ledger technologies, may deliver significant benefits to the financial system and the broader economy.

Responding to the FATF recommendations, policymakers, government officials, and representatives of a number of crypto companies gathered to discuss challenges of implementing them at the V20 summit, a conference concurrent to the G20 summit which also took place in Osaka on June 28 and 29.

At the conclusion of the summit, a group of national industry associations signed a Memorandum of Understanding “to establish an association to provide a global unified voice for the virtual asset industry,” as news.Bitcoin.con previously reported.

What do you think of the G20 declaration on crypto assets? Let us know in the comments section below.

Images courtesy of Shutterstock, the G20, the V20, and the Japanese government.

The post G20 Leaders Issue Declaration on Crypto Assets – A Look at Their Commitments appeared first on Bitcoin News.

Japanese Regulator Approves Libra As It Is Not A Crypto

The most raved-about project of Facebook, Libra, will not face regulatory issues in Japan, as the country’s financial regulator approved...