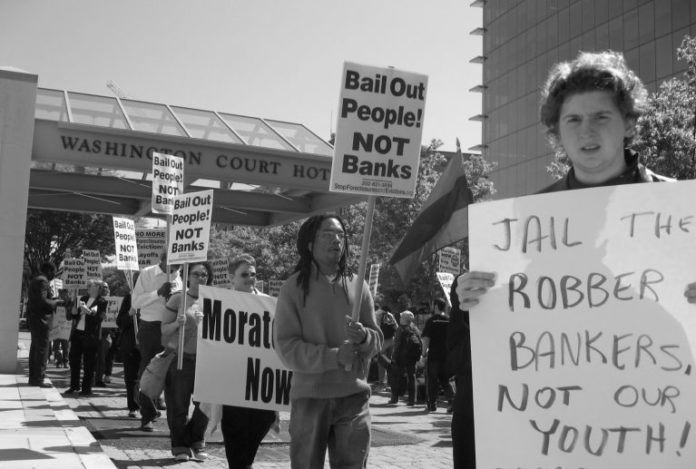 This year the public has seen a lot of the expansive monetary policy taking place with 37 central banks participating in monetary easing. Unfortunately, most people don’t understand the methods central banks like the Federal Reserve use to increase the money supply and never take the time to understand the process. The following is an in-depth look at how the Federal Reserve or any central bank “prints money” by adding credit to banks’ deposits, lowering the fed funds rate target, and using large-scale open market operations to purchase securities and Treasuries.

This year, the Fed, the European Central Bank (ECB), the Bank of Japan (BoJ), People’s Bank of China (PBoC) and many other central monetary institutions are all heavily involved in large-scale monetary easing policy. Whenever these easing practices happen, people like to say that the Fed has “fired up the printing presses” and many people assume the central bank prints money in a literal sense. The Fed, however, doesn’t have a printing press that mints fresh hundred dollar bills on a whim as that process is done by the Treasury Department. The fact is the majority of global citizens don’t use physical cash for expenditure and fiat currency is mostly accounted for using an electronic ledger system.

The central bank does and can increase the money supply, but it is done in an electronic way by using a system of credit with smaller financial institutions. When inflation makes purchasing power weaker, more funds are needed and the available supply of money (liquidity) drops lower. The Fed is in charge of managing the nation’s liquidity when the network of smaller banks below it claim that reserves are running low. These complaints make the Fed initiate expansive monetary policy in order to spur borrowing, investing, and overall growth.

Understanding that these newly created funds never trickle down to the average citizens and they simply enrich the banking industry helps one to grasp how manipulated the monetary system is today. One of the first tactics the Federal Reserve uses to help stimulate the economy is managing the Fed Funds Rate. When the Fed wants to create more liquidity, the central bank will lower the amount of funds banks are required to hold in reserve each night. This interest rate is what banks are allowed to charge to other financial institutions in order to pass the Fed’s overnight rate. It’s a bit telling because when smaller banks beg for the Fed rate to be lowered, they are simply stating their fractional supply is not enough to remain solvent.

If a bank is short on liquidity it can borrow Fed approved funding from another bank and the Fed Funds Rate is basically the interest rate used. However, a central bank’s interest rate also guides lending throughout the country because it is used as a benchmark for loans, mortgages, and credit card debt. Average citizens don’t see many benefits when the rate is slashed unless they are a borrower. When the Fed lowers the target for the Fed Funds Rate, it essentially adds credit to banks’ deposits which makes them want to lend more. When consumers can’t repay debts, the circle continues and credit is still given to the banks in order to spur consumerism and to allocate even more debt.

Another method used by the Fed to help control the economy is by leveraging expansionary monetary policy known as quantitative easing (QE). When the Fed uses open market operations to purchase large-scale assets from banks, people call this act “printing money,” because it is creating funds from thin air but electronically using credit. Ordinary people do not see the fresh funds and are again greeted with predatory lending practices instead. When the Fed is involved with overnight repos and open market operations, it purchases Treasury notes and other securities from a select group of member banks. The Fed creates credit from literally nothing and exchanges the credit for the Treasuries and other assets. This, in turn, gives the smaller institutions more funds to lend and typically these banks lower their lending rates. The fresh capital is hoarded by the banks in reserves while they sell credit cards with interest, autos, homes, and school loans to anyone willing to bite. Since the inception of the Fed in 1913, research that cites the Fed’s so-called ‘trickle-down economics’ of bailing out the banks indicates the process has never improved the economic standing of the lower and middle classes.

Moreover, when the central banks buy assets like Treasuries and securities at large-scale from illiquid member banks, it places false confidence in a failing financial institution and many other struggling banks below it. In the book “The Case Against the Fed,” written by the economist Murray Rothbard, the novel explains how non-existent reserve leeching grows.

“Suppose a central bank buys an asset from a bank — For example, the central bank buys a building, owned by the Jonesville Bank for $1,000,000,” Rothbard writes. “The building, appraised at $1,000,000, is transferred from the asset column of the Jonesville Bank to the asset column of the Central Bank. How does the Central Bank pay for the building? Simple: by writing out a check on itself for $1,000,000. Where did it get the money to write out the check?” The Austrian economist adds: Rothbard notes in his well-known essay that if the government falls prey to the temptation of printing, a great deal of new money inflation is invoked and society doesn’t trust the purchasing power of legal tender. Everyday citizens can’t do much of anything to stop the manipulated monetary system but they can participate in counter economics to avoid central planning. Average Joes can use digital currencies, precious metals, and other means of barter and trade in order to escape the fiat-Ponzi.

Individuals and organizations removing themselves from the failing monetary order created by bureaucrats and bankers will deal with the fallout in an easier fashion. Because 37 central banks have decided to manipulate the global economy, citizens who are not aware of the fraud must deal with destructive booms and busts, and rising inflation that derived directly from the banks themselves. The only realistic way to stop the world’s economic problems and that is by eradicating the central banks’ plans altogether.

“There is only one way to eliminate chronic inflation, as well as the booms and busts brought by that system of inflationary credit: and that is to eliminate the counterfeiting that constitutes and creates that inflation,” Rothbard concedes at the end of his book. “And the only way to do that is to abolish legalized counterfeiting: that is, to abolish the Federal Reserve system.”

The overall chart of Bitcoin demand has shown a clear growth trend, with demand in dollar terms increasing by 2.2...