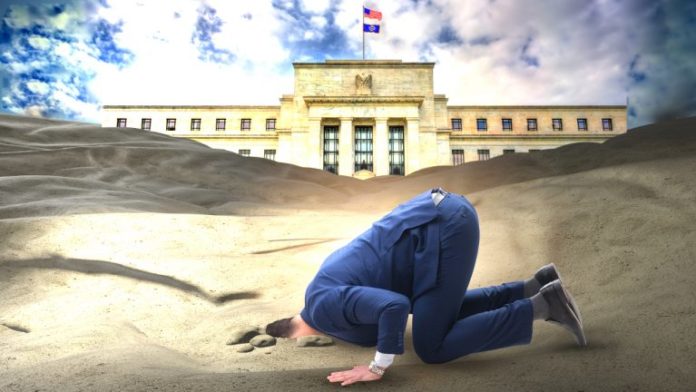 The central banking system in the U.S. and the country’s megabanks have manipulated the economy for quite some time and these days, the coronavirus has been a great excuse to create trillions for stimulus. A recent report from the analysts at Wall Street on Parade indicates that American citizens could be responsible for 98% of the $6.98 trillion from the Fed’s balance sheet. Five unelected people from the New York Federal Reserve and its shareholders’ JPMorgan Chase, Citigroup, Goldman Sachs, and Morgan Stanley created trillions of dollars without permission from the American people.

The Federal Reserve, America’s megabanks, and financial incumbents do whatever they want these days and the Covid-19 pandemic is the perfect excuse for massive corporate and Wall Street bailouts. During the last few months, financial analysts from the publication Wall Street on Parade, Pam Martens and Russ Martens have been exposing the central bank’s schemes and ties to their corporate masters. A while back news.Bitcoin.com reported on how the Martens discovered that the economic system in America started crumbling in September, but an even newer report suggests it started as early as August 2019. On May 19, 2020, the Martens again published another scathing review of the New York Fed and shareholders putting American taxpayers “on the hook for 98% of the Fed’s $6.98 trillion balance sheet.”

“If the Fed and it’s rapidly growing $6.98 trillion balance sheet blows up, the U.S. taxpayer will be on the hook for 98 percent of the losses.,” the report details. “The bank shareowners were responsible for just 1.8 percent of the $6.98 trillion in liabilities that the Federal Reserve has created with the flick of an electronic button. In other words, an institution controlled by five unelected people, with the insane power to create money out of thin air by pushing an electronic button, have put taxpayers (and the next generation) on the hook for $6.85 trillion,” the report adds.

The Martens report continues to explain how the Fed created all that money out of thin air. The researchers say that the NY Fed has been pushing the button the most and way more than the other 11 regional Federal Reserve banks. “As of last Wednesday (May 13, 2020), the New York Fed’s balance sheet stood at $3.9 trillion or 56 percent of the balance sheet tally for all 12 regional Fed banks,” the Martens stressed. The Wall Street on Parade analysts say they have scoured through the share totals for each of the 12 regional Federal Reserve banks. The report further explains the real masterminds behind all the money creation and the Fed’s quantitative easing schemes. The Martens state:

The New York Fed is privately-owned by some of the largest, most dangerous banks in America which, since 2008, have been habitually propped up by cheap money from the New York Fed. Those megabanks include JPMorgan Chase, Citigroup, Goldman Sachs, and Morgan Stanley.

Creating Trillions With No Questions Asked, Is a Common Theme Among Central Banks and Financial Incumbents Since the Early 1900s

The Federal Reserve and the financial incumbents have been caught red-handed so many times, that setting up the American citizenry to take the brunt of $6.98 trillion is really no surprise. The banking cartel manipulated the nation’s monetary system since the early 1900s and in 1913 when the central bank came to fruition. The ‘House of Morgan’ and the Fed ruined the economy again in the ‘20s and ‘30s and crafted the banking holiday. Throughout 2007 through 2010 the Fed and mega bankers did the same thing and created the subprime mortgage crisis. After 2010, two years later in 2012, tens of thousands of Americans and international citizens took to the streets and camped out in the financial districts for months during the Occupy Wall Street movement.

At this time, bitcoin was around for three years old and was steadily gaining a lot more value in 2012. It’s now been over 11 years since the creation of bitcoin, and eight years since Occupiers took to the streets. It is blatantly obvious that the central banks and the smaller financial incumbents that are shareholders, will never be held accountable. Despite the severe vulnerabilities and looming hyperinflation, the Fed will continue to create massive amounts of dollars at any time, in a whimsical fashion. There is a reason why only five board members have been able to create 6.98 trillion dollars with no questions asked. The reason is no one is going to stop them, as the banking cartel understands the American populace and all the other citizens from countries the USD infects, have no clue what’s going on with the value of their own money.

What do you think about the Martens report that shows the NY Fed is leaving taxpayers on the hook for trillions? Let us know in the comments below.