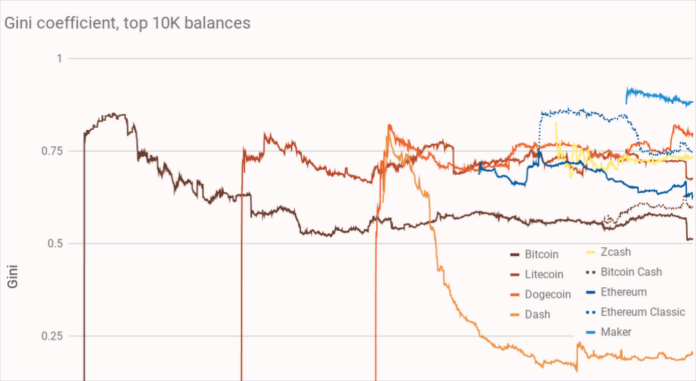 Google Cloud, a distributed computing service, has added several new cryptocurrencies to its data collections. The service originally introduced Bitcoin data in February 2018, and it followed up on that with the addition of Ethereum data last summer.

Now, six more altcoins—Bitcoin Cash, Dash, Dogecoin, Ethereum Classic, Litecoin, and Zcash—have been added to the service. These additions mean that large-scale crypto analysis is more feasible than ever. The aforementioned datasets are now available to the public, but Google Cloud has already done some work with the datasets on its own.

The team behind the project has added some pre-configured queries that allow blockchain data to be displayed in the form of double-entry bookkeeping, something that block explorers rarely allow. The team has also analyzed mining economics. These and other use cases are demonstrated in the team’s original blog post.

However, Google Cloud’s blog post shows off one particularly compelling application: Gini Coefficients. This measurement essentially represents whether a blockchain’s coin supply is concentrated among a few addresses or distributed across many different addresses. Higher numbers mean that a coin supply is very concentrated, as shown in this chart from Google Cloud:

The Google Cloud team has made a few interesting observations. In particular, the team has noted that Bitcoin Cash‘s low transaction fees should have made its coin supply highly distributed; however, this has not occurred. The team also comments on Dash, noting that Dash’s coin supply is “remarkably well distributed.”

The team also acknowledges some possible complications. Multiple addresses can, of course, belong to one owner, meaning that any given coin supply may be more concentrated than it appears to be. Additionally, addresses with small balances have been removed from the analysis, while large, centralized exchange addresses have been left in the analysis—both of those decisions introduce biases.

Google Cloud isn’t the first to notice the importance of wealth distribution: the concentration found in various coin supplies has been a recurring news topic for several years. So, although the Gini Coefficient is not a perfect measurement, and although many other possible analyses exist, the implications are very important. As Google Cloud’s blog post explains:

“Studies … tell us that biodiversity … increases ecosystem productivity by supporting more complex community structures. The downward trend of Gini (i.e. higher levels of diversity) for crypto-asset holdings is likely a positive sign for the future health of crypto-economies.”

However, Google Cloud is quite explicitly not jumping to conclusions, and the project team has noted that different types of analyses could produce contradictory results. As such, it is encouraging users to work with the data in other ways. With any luck, crypto statistics will soon be more in-depth and revealing than ever before.

What is the Essentia Blockchain Framework | A Beginner’s Guide

The Essentia blockchain framework is a decentralized solution to protect user privacy, data, ID and assets across multiple blockchain platforms....