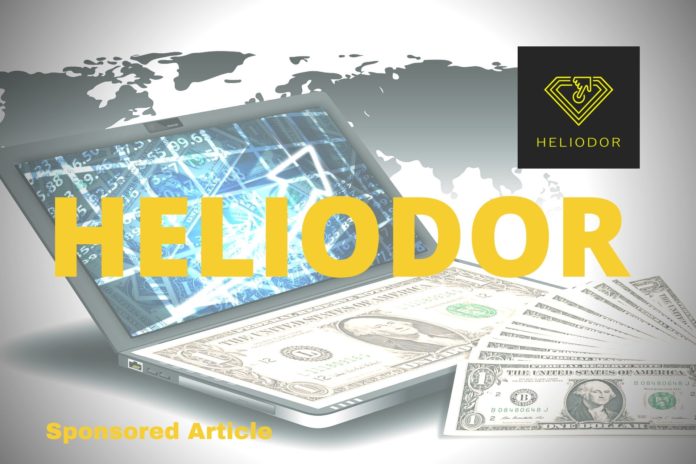 While cryptocurrencies have been here for almost a decade since the inception of Bitcoin, their utility in the real world economy has been very limited. It is true that cryptocurrencies are much faster means of cross-border payment settlements, however, they are not as fast to be used at POS terminals.

The team behind Sapphire Coin (SAPP) is working hard to change this paradigm and has developer this cryptocurrency useful in the real-world economy as a stable means of payment. Besides, to have an engaged list of SAPP coin users, the project also involves a unique rewards-based mechanism for staking the SAPP tokens.

The team behind Sapphire Coin (SAPP) is now working on another partner coin called the HELIODOR Coin (HELIO). The HELIODOR Coin is basically a masternode coin that generates MN rewards from the real earnings.

With Sapphire’s ultimate goal of pushing cryptocurrency use in the mainstream economy, the HELIO coin will cater to large-scale banking and financial services. As per the timeline announced, the HELIODOR Coin will be generated in June 2020 via a fork in the Sapphire Coin (SAPP).

After the fork, all owners of the SAPP Coin will automatically receive HELIO coins for free. Both – the SAPP and the HELIO coins – will be listed on their own stock exchange and exchangeable from the start.

The HELIODOR (HELIO) coin has been specifically created to strengthen and complement the SAPP tokens, just like the KYANITE Coin (KYAN).

As per the announcement, HELIODOR shall become the base coin for the HELIOBANK and will come with its own business case. The Masternode Coin will majorly finance its rewards through fees.

As stated earlier, the SAPPHIRE team plans to use the HELIODOR Coin for offering professional banking and financial services. Thus, they will be offering these services through HELIOBANK while breaking the shackles of the traditional banking system.

Besides, the HELIOBANK will serve as a decentralized exchange (DEX) maintaining absolute transparency in its services offered. The HELIOBANK DEX is part of the Birake Network that has a common user base and orderbook. This facilitates any DEX user of one Birake network to trade at every Brake Exchange.

The idea behind HELIOBANK is that they want o give individuals and the private sector some more control over the financial sector.

Masternodes are one of the key supporters for earning additional revenue in a Proof-of-Stake (PoS) consensus mechanism. Just like any other node, the Masternode also works on validating and verifying transactions in a blockchain network.

However, the Masternodes have additional responsibilities over the normal nodes and are responsible for the security and the safety of the network. Besides, Masternodes also earn higher rewards over the traditional nodes.

But to become a masternode of a network, the masternode operator shall deposit an additional number of tokens in the network.

The Sapphire Coin (SAPP) project also runs on a similar masternode concept. The SAPP coin is also a masternode coin allowing its users new opportunities of earning rewards and converting them into real goods and services.

The team behind SAPP coin is creating a complete ecosystem with multiple use cases for the cryptocurrency. This includes SAPP OTC, SAPP Explorer, and SAPP Shopping.

Who Are the Most Popular People in the Crypto Industry

The crypto industry was forged through the vision, experience, and knowledge of many great people. And while some stay in...