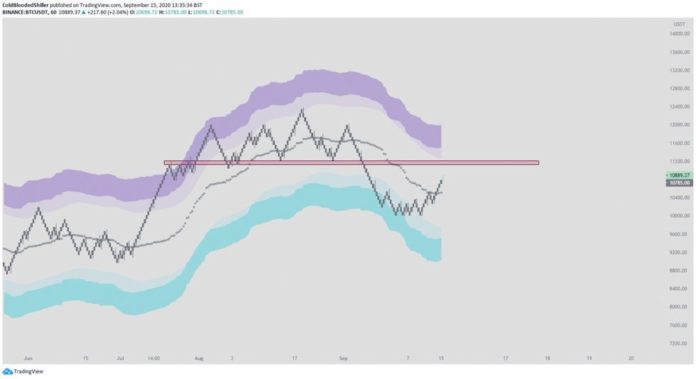 Bitcoin is currently rallying up towards the $11,000 region while the rest of the market sees some mixed price action.

Today’s strength has come about after a multi-week period of range-bound trading between $9,900 and $10,300.

The intense selling pressure that the cryptocurrency faced throughout the past couple of weeks was not enough to shatter the support at $9,900 that bulls ardently defended.

In the time since, its price action has been overwhelmingly positive. That being said, analysts are noting that the benchmark cryptocurrency’s ongoing upswing may be running out of juice.

One trader is looking towards the price region between $11,100 and $11,200, explaining that a rejection at one of these levels is likely.

At the time of writing, Bitcoin is trading up just under 2% at its current price of $10,900. This marks a notable upswing from its recent lows of 10,200 that were set just two days ago.

Bitcoin’s ardent response to the attempts from bears to force it below $10,000 seems to be a sign of underlying strength.

The subsequent reaction has further bolstered this theory, showing that buyers still have a serious edge over sellers – at least for the time being.

Whether or not it can start navigating back up towards its yearly highs of $12,400 now depends almost entirely on whether or not BTC can break above the lower-$11,000 region.

Analyst: Expect BTC to See Weakness if It Breaks into $11,000 Region

While speaking about the cryptocurrency’s near-term outlook, one analyst stated that he is expecting it to see heightened weakness in the near-term if it is able to break above $11,000.

He is specifically pointing towards two levels — $11,100 and $11,200 – as areas with massive selling pressure that may hamper Bitcoin’s growth.

There’s a strong likelihood that Bitcoin will test these levels at some point in the coming few hours. Its reaction to them should elucidate the present strength of its buyers.

The Securities and Exchange Commission (SEC) of Nigeria has designated crypto assets as securities as the authorities step up efforts...