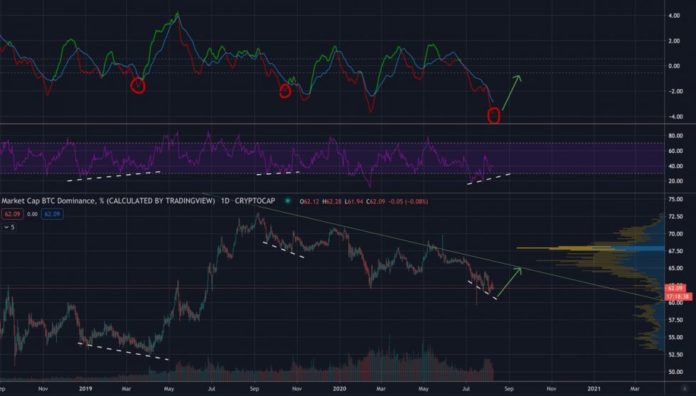 Bitcoin and the aggregated cryptocurrency market are currently witnessing some incredibly mixed performance.

While many smaller altcoins post gains similar to those seen by the market in 2017, all the major tokens are currently caught within consolidation phases.

Despite not being able to push higher in the near-term, it is important to bear in mind that Bitcoin and other major altcoins remain within macro uptrends.

While speaking about where BTC may trend next, one prominent on-chain analyst explained that he expects the benchmark crypto to crush altcoins in the coming few weeks.

He believes that Ethereum may also contribute to this trend.

Bitcoin Consolidates Below $12,000 as Altcoins Steal the Spotlight

At the time of writing, Bitcoin is trading down just over 1% at its current price of $11,580. This is slightly below where it has been trading throughout the past week.

Last Saturday, the cryptocurrency rallied up to highs of $12,000 before facing a harsh rejection that sent it reeling down to $11,000.

In the time since, BTC has recovered back to the upper-$11,000 region, but it has yet to surmount the $12,000 resistance successfully.

During its recent consolidation phase, altcoins have stolen the spotlight, with many smaller tokens posting incredible gains throughout the past week.

One such example would be Band Protocol (BAND) – an oracle network whose price has rallied from recent lows of $3.80 just a couple of weeks ago to highs of $14.00.

Investors are now keen on finding the next altcoin that will post this type of explosive parabolic rally.

Willy Woo – a well-respected on-chain analyst – explained in a recent tweet that there are a plethora of factors that all indicate Bitcoin is going to gain against altcoins in the coming few weeks.

“Bull divergence, BTC Dominance, expecting BTC to gain over alts in coming weeks. Waiting for the top indicator to reverse (detects volume movements). ETH currently more bullish than other alts. In that regard, I believe we’re in an era of dual pumpage.”

There is a pattern seen as of late in which altcoins and Bitcoin see rotating uptrends. If this trend persists, then BTC will likely post gains in the weeks ahead.

Bitfinex says the second attempt by plaintiffs to frame the bitcoin manipulation complaint will fail just like the first attempt....